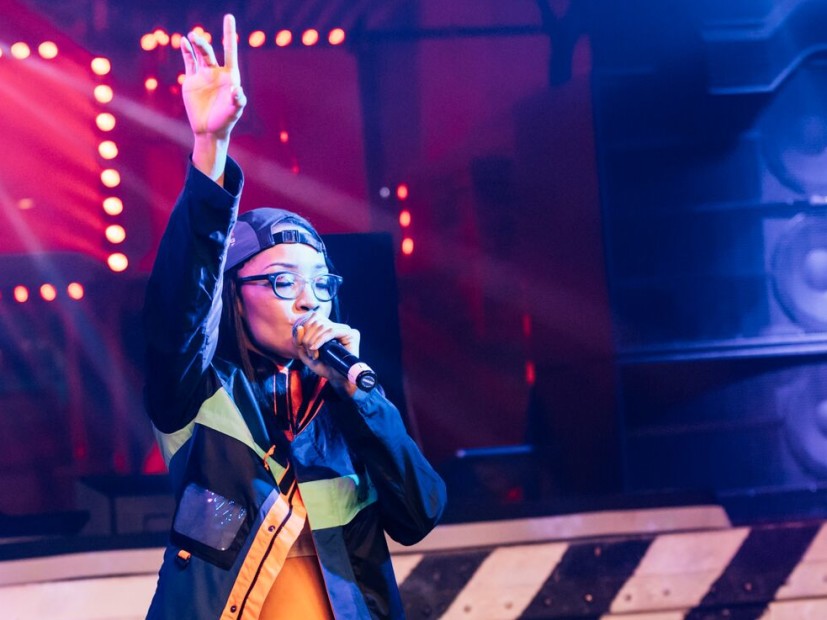 Bebe O'Hare Takes The Crown In WAV's 1st Season Of "Versus"

Hollywood, CA – Rap competitions aren’t much of anything without a winner and last Thursday night (November 16) in Hollywood, WAV bestowed the title of “champion” to Bebe O’Hare as they closed out the first season of Versus, the platform’s newest reality show that lived exclusively on their app.

For the finale, the legendary Wu-Tang Clan member Ghostface Killah, The Cool Kids and season regular production experts, Sonny Digital and Scoop DeVille were on own hand as honorary judges but ultimately, it was the fans on the WAV app who decided the Chicago-bred female rapper would command the crown.

Speaking on the ideologies of validation and confidence, O’Hare told HipHopDX exclusively what the win meant for her budding career.

“You always hear people say that they support you but for people to show up in numbers like this and in the way that they did tonight is priceless and is more than just $10,000,” she tells DX.

“What they did for me, I can never repay them back.”

O’Hare bested runner-up Asad Ill and the other nine contestants to become the first-ever winner of the Hip Hop battle series, that was based solely on talent. Music industry vet Kenny Burns served as the daily host and notable artists such as DXBreakdown host Murs, Trinidad James, Curren$y, Casey Veggies, Dumbfoundead, Dizaster, Nocando, the aforementioned Sonny and Scoop as well as yours truly, HipHopDX Editor-in-Chief Trent Clark, all appeared throughout the course of the season.

Being a female in any male-dominated arena is no easy hurdle to hightail and O’Hare didn’t sugarcoat her road to victory.

“It was grueling,” she admitted of her experience on Versus. “My competition, we were all different. you never knew what to expect from anybody on any given day. So every challenge was like, be sharp on your toes, be in your mind, don’t overthink it too much, just kind of let your own personal style come out, and it worked.”

Those who were on hand and tuned in to the live broadcast were privy to an exclusive performance from Ghostface, who breezed through a portion of “Mighty Healthy” (with an assist from Killah Priest) from his 2000 classic album, Supreme Clientele.

This is so live I didn’t know it was happening. @realghostfacekillah dropping them #SupremeClientele “Mighty Healthy” gems with @therealkillahpriest pulling off the easy hype man job in history lol. Shout out @wav @kennyburns #Versus #EICTC

Both O’Hare and Asad Ill also performed original songs they recorded with their Versus coaches, Sonny and Scoop, respectively. Renowned among her existing fanbase for delivering more battle-oriented music, her track for the show undoubtedly tread in the waters of everything current in 2017.

“I kind of wanted to take a risk,” she explained. “I wanted to give people … like they already saw that I could rap from the show. So it’s like, you want to see if they have artist potential. I wanted to bring me to that same platform and it just kind of gelled together to make a good song. Sonny laced me with some fire so I had to do what I had to do on it.”

The full playback of the Versus finale will be available on WAV this Wednesday (November 22).