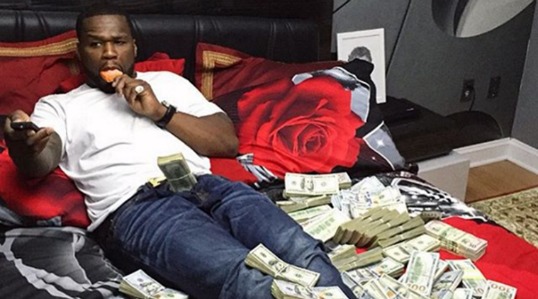 The “Drama Never Ends” for 50 Cent. What used to be trigger fingers have turned into Twitter fingers; with the index slipping on Instagram, but where his beef once resulted in bullets it has in recent years produced legal troubles and public outrage. Check out nine times 50’s online indiscretions have landed him in someone’s bad graces (and even out of a few dollars).

Fiddy has been in beef after beef with rapper after rapper. This time he stepped over the line when he posted a sex tape of Ross’ baby mama online back in 2009. He added insult to injury by narrating the tape in graphic fashion as his “Pimpin’ Curly” character. The posting provoked a lawsuit from Leviston. In the summer of 2015, he was ordered to pay $7 million to her, leading to 50 to file for Chapter 11 bankruptcy.

No, this isn’t a dirty photo nor a picture with friend-turned-enemy-turned-friend Floyd “Money” Mayweather. Amidst his bankruptcy filings, during which he claimed his assets were worth less than what he owed to creditors, he posted a photo to Instagram of himself with stacks of cash. This led the judge in charge of his case to question the authenticity of his bankruptcy filing, while 50 claimed the cash was fake.

Rick Ross was arrested in June 2015 for kidnapping, aggravated battery and assault of Jonathan Zamudio. When Zamudio filed a civil suit, Ross countered that Zamudio and Leonardo Cacere were in fact the real perpetrators. Where does 50 come in? Fif’ shared a picture with his arm around a man stating: “This is my FRIEND Jonathan, he was kidnapped and assaulted. He has chipped teeth from being pistol whipped. I can’t imagine how bad that hurt. Wait I bet it hurts like being a CO/ Rapper in Jail. This is not me this KANAN (50’s character from the Starz TV show, Power). Now you pay.” Ross said in the countersuit that the civil suit against him is an attempt of extortion, instigated in part by 50 Cent.

This here is a prime example of “once it’s out there, it’s out there for good.” Just days after the shooting of 50’s “Big Rich Town” Curtis posted a picture of model/actress Sally Ferreira on Instagram and with the text: “WARNING: Do not attempt to work with this thirsty Video bitch [Her name is Sally Ferreira and she’s a model…] she sent photos Of the video shoot to Media takeout Saying I’m in a relationship With her Can anyone say RESHOOT.” Though the post was taken down just a few hours later, the damage was done: 50 was slapped with an $11 million defamation suit that claimed 50’s post cost Ferreira industry work.

The Ferreira picture wasn’t the only time Fiddy put something on social media and thought better of it. In December 2015 he posted a picture of himself with his eldest son Marquise, with whom he has a strained relationship, with the text: “this kid is gonna hate his mother when he realize what she did to him. He has to make it on his own like I did.” Marquise’s mother and 50’s ex Shaniqua Tompkins laid down her wrath, not only calling him a bully but a liar to his fans as well. She claimed that he was actually shot five times, but said he was shot nine times to avoid comparisons to Tupac.

It Started Over Nikes…

This one is added in because, frankly, it’s a rare example of when 50 didn’t provoke anyone but still was attacked. His son Marquise posted a picture of Nike shoes on Instagram, to which the father commented: “You will be 20 in a few months I’m happy to see you in good spirits. You be strong out there on your own boy. You are a grown man now.” While Marquise’s response was civil, Tompkins couldn’t resist the urge to strike. Amidst the verbal thrashing she reiterated the bully sentiment, saying “You like to pick on women and children.”

Tompkins wasn’t the only one to go after 50’s street credibility in response to his social media stunts. 50 taunted Meek Mill with Instagram photo after Instagram photo when the latter was getting crushed by Drake in last year’s battle. Fed up, Meek turned to Irv Gotti and asked him to post a court document signed by Curtis Jackson requesting protection from Irv, his brother Chris, and Black Child following their assault on him at the Hit Factory Studios in 2000. Gotti posted the document, with Curtis Jackson listed as the informant, in January 2016, following a back-and-forth banter with 50 on Instagram.

I realize my autism comments were insensitive, however it was not my intention to offend anyone and for this I apologize.

Jokes That Cut Too Deep

Back in 2012, a fan Tweeted to 50 an empty threat about his 5: Murder by Numbers EP: “Release the album or get shot again.” Never one to take threats lightly, 50 responded with “yeah just saw your picture fool you look autistic” and “I don’t want to special ed kids on my time line follow some body else.” However, after his comments were noticed and (surprise!) offended people, including autism activist and actress Holly Robinson Peete, 50 apologized for his words: “I realize my autism comments were insensitive, however it was not my intention to offend anyone and for this I apologize.”

Fool Us Twice Then It’s…

Perhaps the lowest 50 stooped on social media was his filming and posting a video of 19-year-old autistic airport janitor Andrew Farrell. Seems uneventful enough, except that 50 mocks Farrell, mentioning that his eyes are dilated and saying he looks “high as a muthafucka.” He goes on to criticize the Farrell’s generation while Farrell keeps his eyes forward. Farrell’s parents demanded an apology and that he pay $1 million, while countless social media users swarmed to berate 50. The next day, the humbled G-Unit general returned with an apology and a hefty donation for advocacy organization Autism Speaks.