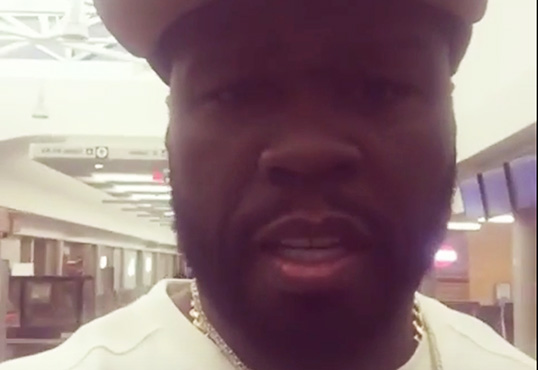 50 Cent is known for beefing with pretty much everyone, from Fat Joe, to Fredro Starr, to Floyd Mayweather. At this point, it may be quicker to list the people the megastar hasn’t gotten into it with. But he may have taken things too far when he went in on an airport employee this past weekend.

In a since-deleted Instagram post that has now been uploaded to YouTube (and is making noise on Reddit in a thread titled “50 cent is an asshole”), the rapper follows alongside an airport employee pushing a cleaning cart, accusing him of being “high as a muthafucka.”

“What’s your name?” 50 asks the man. “Look at him. What kind of shit you think he took before he got to work today? He high as a muthafucka, right here in the airport. Pupils dilated, everything. The new generation is fucking crazy,” 50 says, as the employee shakes his head and continues to keep his eyes forward.

After posting the clip, many of 50’s followers called him out for harassing the employee, pointing out that the man could’ve been disabled. One Instagram user who claims to have gone to school with 50’s target posted a photo and wrote that the man has “extreme social difficulties” adding that “he has a hard enough time getting through life without jackasses like you making fun of him.”

@50cent I went to school with him. His name is Andrew Farrell. He has extreme social difficulties just to let you know. He has a hard enough time getting through life without jackasses like you making fun of him. I hope you feel good about yourself. You just lost a huge fan. @drewfarrell75

Since the clip went viral, many IG users have been posting messages on the man’s most recent photo, praising his professionalism and sending him messages of support.

In a response on the photo, the man wrote, “Thanks everyone for the support and I do plan to go to court about it.”