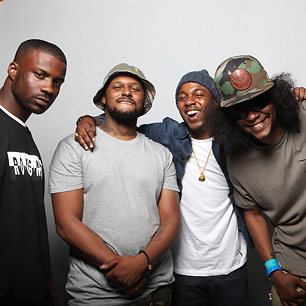 The promise of Black Hippy sort of went by the wayside as each member of Top Dawg Entertainment went in widely different career directions. Ab-Soul has carved a weird lane for himself, ScHoolboy Q still flies his gangsta flag high and Kendrick Lamar is essentially Hip Hop’s champion. This leaves Jay Rock, who’s four years past his well-received debut Follow Me Home. Fans will get a chance to hear his sophomore follow-up 90059. Set to drop at midnight, he’s already had some sure fire bangers thanks to “Money Trees Deuce” and “Gumbo.” For the final loosie released before the project drops, Rock reconnects with Ab, Q and K.Dot for “Vice City,” making it the first time the three have released a recording together in quite some time.

Is “Vice City” The Black Hippy Reunion We All Wanted Or Something Else?

Andre: Black Hippy wasn’t supposed to be some four horsemen of the apocalypse stunt or anything. It was supposed to be textured, taut rhyme schemes with deep thoughts. That’s the way I’d always imagined it. Ab-Soul (the undisputed leader of that sound) would allow his third eye to open, and it would turn into a scene from E.T with all of TDE floating in the ether of their own flows. This is not that. And that is not a bad thing, but it isn’t a good thing, either. It’s not like what I expect to happen should ever actually happen (God forbid that, actually, like, fuck) but I wanted more cleverness. Everyone (even Schoolboy Q!) is just so damn serious.

What ended up happening is Kendrick dominating the record. What he does now is such a finely tuned thing that he ends up overshadowing Soulo’s glorious word-flips and Rock’s straightforward brilliance. It’s too bad, because there’s more there than that little section where the beat pauses and they all flip their rhyme schemes to fit. Frankly, it’s kind of annoying. Like someone who constantly pauses in the middle of a sentence, the constant staccato numbs the momentum of the track. And that’s what tracks like these need: constant forward momentum. Instead of sounding like a pod of killer whales, they sound like a single organism with sentient appendages. Which is cool and all, but not what I needed out of the most talented roster —at least lyrically — in the known universe.

But, is it good? That’s tough to say. It’s a slow-winding country road instead of an action film. Both are good. The thing that separates them from everybody else still shows up, though. They are all incredibly talented emcees. And each part of their split hive mind styled flow is compelling enough. Plus, that hook: “Big money, big booty bitches / Man that shit… gon’ be the death of me…” is pretty great. So as far as continuing to be the group with the conscious, I salute them. As far as this particular Black Hippy reunion, I’ll need something a little more virulent in the future. Good to have you back, guys.

Ural: “Vice City” isn’t the Black Hippy reunion many were asking for. Then again, TDE has mastered the art of defying expectations for quite a while now. So, I’ll just keep this simple. Black Hippy kept a centralized theme while showing off each of their individually evolved personalities on “Vice City.” Structure wise, the track isn’t a posse cut in the general sense. These just aren’t a selected group of emcees waiting their turn at lyrical bat but labelmates, friends and close collaborators who work frequently with each other anyway. Keeping that in mind, the Cardo produced track does two things fairly well; fits well into 90059’s vibe and has the four amigos together on one track. There’s a central and sort-of “been there” theme of women sometimes being an addictive and dangerous distraction. An interesting case of style over substance, the delivery Black Hippy uses is loose yet slightly intricate.

However, having K.Dot kick things off is totally unfair because, yet again, he manages to outshine due to sheer star power alone. That doesn’t mean Ab’s clever wordplay (that harpoon line was pretty humours), Q’s manic gangster-isms and Rock’s interesting narrative focus can’t hold their own. The best thing about “Vice City” is how comfortable they actually sound around each other. That’s the best description of the record, it’s very safe which could be a serious issue for many. Everyone else can enjoy the record on its own merit. At it’s worse, “Vice City” is a missed opportunity to really show the newly found TDE fans exactly why so many rap fans were clamoring for a Black Hippy reunion. On the flipside, this could possibly mean collaborations more in line with what people want from the foursome.