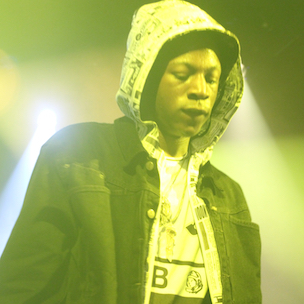 Joey Bada$$ & The Mission Of The Pro Era Movement

Moments before he broke into his cult anthem, “Survival Tactics” with his battle-cry-bars “Niggas don’t want war, I’m a martian, with an army of spartans,” for an encore, Joey Bada$$ took a moment to speak with his fans surrounded by his cohorts.

Joey Bada$$ isn’t the only candidate to spearhead the revitalization of New York City Hip Hop. What was once a vibrant, diversely musical Hip Hop climate (able to create both A Tribe Called Quest, Big Pun, Notorious B.I.G, and The Wu-Tang Clan in one place) has since the mid-aughts bowed to its southern rivals. The city where the counterculture was born has, since its heyday, especially as of late, fallen behind to the South, West and other cities in the arms-race of Rap music. At the end of his first major tour, the prodigal son of Gotham spoke to his cult of Pro Era supporters with a mixture of nostalgic awareness and situational momentum.

“People have asked me why I am doing this tour right before the album. Why not just wait to tour ’til after it drops,” said Bada$$ to a capacity crowd that sat with bated breath, harping on his every word. “It is because it is my last chance to be with you guys, the day one fans, thank you.” 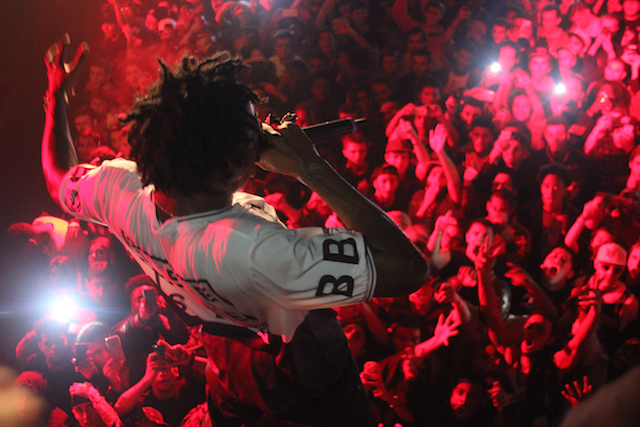 The B4 Da $$ tour, a moniker that continues to make strong use of its own double entendre, made stops throughout Europe and the United States with a finish slated for a two-night stay at Irving Plaza in Lower Manhattan. No doubt this planning was specific, allowing for the group’s last hurrah in front of their native city before the major changes that are sure to ensue in the aftermath of their frontman’s debut album.

Bada$$ and his friends approach the cliff of stardom being both a significant part of the movement and its black sheep, all at once. However, as New York rappers with that distinct boom-bap sound that first invigorated the five boroughs, they are an act unto themselves: enlivened by, but not showing fealty to the producers, personalities and socio-economic activities that burned hot within the cages of his Golden Era heroes.

During those Saturday and Tuesday shows, the sense of camaraderie both on and off stage was palpable as a home grown group of friends continue their ascent into the music scene on the cusp of gaining mainstream stardom.

The Mystique Of The New York Emcee

What makes Joey Bada$$ stand out is not the address on his license but the address on his beats and bars. It is one thing to be an emcee from New York and another thing altogether to be a New York emcee. While the aforementioned A$AP Mob and front man A$AP Rocky are from Uptown Manhattan, the sound they are associated with is closer to Houston then Harlem. Joey and Pro Era aren’t just New Yorkers, they are boom-bap rappers.

If not for the cell phones taking photos and video for social media or doing the job that lighters did in the days of old, one could have easily mistaken this Union Square club for a scene from the 90s in the Golden Era of New York Hip Hop that inspired these brooklynites to make music, and provided the title for the mixtape that first put the group on peoples radar, Joey Bada$$’ 1999.

Almost two decades after the year for which his mixtape was named, the current landscape of Rap music — especially as it pertains to the big apple — is what makes this moment and Bada$$’ place in it so important. The first two decades of the art form in New York were more or less controlled by acts from KRS-One to Marley Marl to Nas and Jay-Z being on the forefront of musical innovation with a sound that didn’t borrow from other regions or tone down its raw unadulterated sonic rhythms. It was New York Hip Hop whether you liked it or not. And it was mythologized because of it’s central tenets: hard baselines, soul-tinged samples, and a focus on lyrical wordplay over mood or style. In the time since ‘99 this hasn’t been the case. It felt invigorated on those two nights in Irving Plaza

As the forefront emcees of the 47 member Progressive Era went through their sets, they were often joined by comrades who had helped them make the music, lended verses to their tracks or just happened to make a wrong turn and end up in front of a diverse group of screaming New Yorkers.

With A Little Help From His Friends

Each member further justified the majestic two-night stay, debuting never before heard tracks from their litany of upcoming albums. As they jumped around with friends and used a large speaker tower as a trampoline, the barrier between the crowd and the stage became less and less obvious and more implied. They were making New York proud and those in attendance could feel it.

New York has left the driver’s seat of Hip Hop for the better part of a decade and a half. With the exception of a brief stint of control from G-Unit and most notably 50 Cent, who in an interview with HipHopDX mentioned their affinity for Bada$$, as well as the indomitable Dip Set crew, Hip Hop has been dominated by other region, other cities.

When Joey finally graced the stage, pandemonium was the vibe of the hour. Running through tracks from his full catalog, Bada$$ transitioned from mixtapes to his latest single “Christ Conscious” and recently released album cut “On and On.” As Joey led the group in chants of “Pro Era” and “Beast Coast” the feeling was that of watching the calm before the storm.

During several hours of intimacy, the pinnacle of that feeling happened once each night as Joey’s set included a moment of silence for their fallen member Capital Steez along with his fellow PE members. That moment of silence was followed by the crowd and the group rocking out to a Steelo song played over the speakers by the incomparable Statik Selektah who was on the One’s and Two’s both nights. Beyond the humanity displayed in this homage to their old friend, it was a sign the group had not yet forgotten where they came from and was not likely to do so any time soon.

Since that show, much has changed. When I arrived at the venue, the first thing I heard was a bouncer saying “They have three times as many people as they are allowed on their guest list and don’t have any of their shit together, typical Hip Hop.” Typical Hip Hop, hasn’t been typical at all for those who wish to see New York rise from the proverbial ashes. 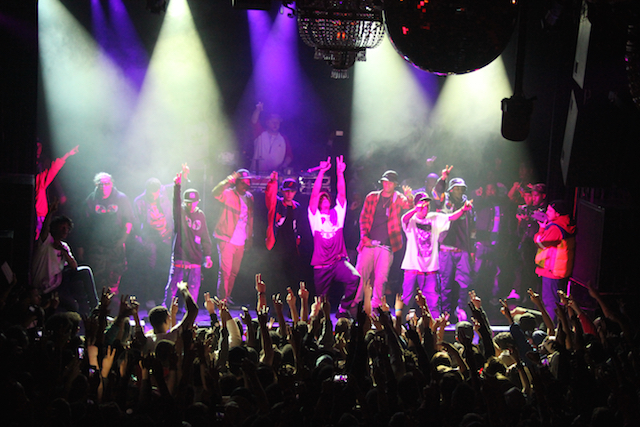 In the last year, New York’s fallen stature became its most pronounced when compton-native Kendrick Lamar declared himself “King of New York” from his seat in Los Angeles and received little to no response from New Yorkers looking to refute. This is the Hip Hop world where Joey Bada$$ will enter stage right, with a cape on his back ready or not to be the superhero the birthplace of Rap hopes he can be and believes he is.

In the Pro Era camp, changes have been swift with more surely on the horizon. On that night, to go back in time, their manager Junior B later snuck me in through the side door along with family members of the group who were denied at the door. Just over a month ago, Junior passed away due to burns from an unidentified accident. Earlier this year, an instagram post by First Daughter Malia Obama wearing an official Pro Era t-shirt went viral and brought awareness of the group to a demographic surely unaware of who they were prior.

The next few months are sure to bring changes as B4Da$$ has finally been heard by the world and Joey finishes up a tour on other continents including Australia and New Zealand. What these changes will bring, from mainstream success and major label acclaim to monetary reward is unknown. We do know that it’s brought a slight solace, as the downturned market for albums finds them on top of a short pile of records sold. We also know that the death of A$AP Yams may have renewed the focus of New York Rap, with Joey calling for consolidation and unification in an interview with Complex. For a couple nights in November however, the members of the Kings County-based rap collective Pro Era danced together on stage and sang along with their early adopting fans to the classic Dr. Dre hit “Deep Cover” like it was 1999. Most importantly, it was beautiful, raw, New York Hip Hop. The kind of music that may thrust he and his small city-of-a-crew into the spotlight as the de-facto young prince and band-of-brothers of New York Hip Hop.