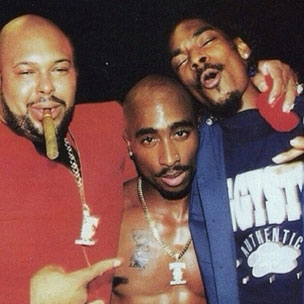 This week, Pharrell’s hat lands on Puff Daddy’s head, “Pam,” from the show Martin, tells French Montana off, and Macklemore gets made into a bobblehead at a Seattle Mariners game. Check the rest of the week’s top Instagram posts below.

The week began like any other week. Game claimed to have won a $20,000 bet against Oklahoma City Thunder player Kevin Durant and shared the details of said bet in a hashtag-filled Instagram post. A few days later, Kevin Durant was doing what normal athletes do, cardio, and while he took a quick rest break, a TMZ cameraman rushed at the opportunity to ask him about the $20,000 with Game. “He’s lying,” Durant said, without thinking twice. While the knife was still freshly attached to his back, Game jumped on Instagram to express his frustration with being called a liar, firing back at Durant with “sore loser.” Rest assured this ordeal had a happy ending. Game clarified the details of the $20,000 bet ($20,000 was the total of the KD gear and shoes that will be donated to the children league team and not an actual lump sum) and said there was a “miscommunication” between Durant and him. Glad the kids still won.

June 10th was declared Drake Day in Houston, Texas by the Mayor of the City of Houston. Drake was born in Toronto, Canada. I repeat, Toronto, Canada. Drake also put together “Houston Appreciation Week,” going on right now until Sunday. The City of Houston recognized this selfless act of Southern love and wrote in the official document, “The City of Houston commends and appreciates Drake for dedicating his to Houston through his passion and enthusiasm for music and our city.” Although Drake Day was declared after June 10th, he can come back next year to celebrate his special holiday. See what a young kid from Canada can do for a city in Texas? Dreams can come true.

Macklemore Gets His Own Seattle Mariners Bobble Head

Not as cool as getting your own holiday but getting your own bobblehead made by the baseball team of your hometown can be equally as exciting. Seattle-bred rapper Macklemore felt the hometown love when he threw the first pitch (better than 50 Cent’s) at the Seattle Mariners game and was forever immortalized in a baseball staple, the bobblehead. Not many celebrity baseball fans get made into the figurines when they throw the first pitch. Macklemore has always put on for his city and its sports, even recording a song, “My Oh My,” in honor of broadcast legend and former Mariners announcer Dave Niehaus.

Throwback Thursdays is gold for nostalgic fans. Snoop Dogg shared a few pictures this week for Throwback Thursdays, including one with Tupac Shakur and Suge Knight (accompanied by his signature cigar). He simply wrote, “July 4 1996!! History.” On July 4, 1996, Tupac performed at the House of Blues on the Sunset Strip, his last recorded performance which was made into a live album titled Tupac: Live at the House of Blues. The 90-minute show was captured on film, watch the performance here, and featured appearances by Snoop Dogg, Nate Dogg and more. It’s surreal to think ‘Pac graced the stage at the House of Blues in Los Angeles before passing away later that year. The vibe must have been insane.

Old friends, new baby, not with each other though. Lil Kim gave birth to a baby girl named Royal Reign on June 9th and Lil Cease sent out best wishes to his longtime friend. “Congrats To The Queen Bee Lil Kim On Her Newborn BabyGirl.. Many Blessings Queen!! Much Love To You..,” wrote Cease in the post. The former Junior M.A.F.I.A. collaborators had an estranged relationship due to dramatic events that led to court trials, including the one that found Lil Kim guilty of perjury. Lil Cease maintains that he never snitched on Lil Kim. All that was put in the past when Cease wished his former friend nothing but the best with her new family.

Pharrell Williams’ hat has a Twitter account. The hat is its own brand. Pharrell is almost unrecognizable without a Vivienne Westwood hat sitting high on his head. When Diddy/Puff Daddy bumped into Pharrell, he had to try on the hat and of course, snap a picture for Instagram. The caption was simple. “@pharrell ME #hat.” Hat was obviously the center of the attention and the main focal point for viewers of this post. Hat blew our minds when we realized it was sitting on Diddy’s head rather than P’s head, turning our worlds upside down from everything we knew to be true. The hat should only belong to you, Pharrell. Don’t do that to us.

Martin‘s Pam to French Montana: “Who Are You?”

Tichina Arnold, also known as Pam from the sitcom Martin, didn’t appreciate French Montana making fun of her via the photo sharing app. The angry actress got on Instagram, screen captured a picture off French’s page, and wrote an essay flexing her anger through properly placed ellipses and words in all caps. To quote Arnold, she wrote, “Man oh man. Mr. Montana, I’ve perused (read through with thoroughness and care) your #instagram profile description, pictures & posts… but despite my determined effort, I STILL don’t have a CLUE to one very simple question… Who ARE you?” She also called him out for dating a Kardashian and taking pictures with celebrities but not using his clout for any good cause. At the end of her lengthy paragraph, she plugged in her non-profit organization which benefits Lupus patients and asked him to donate to her organization instead of wasting money on pointless “basketball” bets. Read the entire caption here.

Earlier this week, DJ Mustard and Mistah F.A.B.’s entourages seem to have exchanged a few blows at the Mezzanine nightclub in San Francisco. The brawl was captured on footage, despite the rappers saying that nothing happened between the two crews. Mustard ain’t worried ’bout a thing though. He uploaded a flashy video soon after with the caption, “Who got robbed last night @yg who got slapped @yg ??? Kill the noise !!!! We walked in the same way we walked out !!!! #MKL #10summers !!! Much love to all the real niggas in the bay.” The relationship between Mistah F.A.B. and DJ Mustard began turning sour after he told the Breakfast Club on Power 105.1 that Mustard’s sound is borrowed form the Bay.

In an exclusive statement to HipHopDX, Tech N9ne shared that his tour, “Independent Grind Tour 2014,” will hit more than 70 cities and feature Krizz Kaliko, Freddie Gibbs, Jarren Benton and Psych Ward Druggies. The tour started in April and is heading to its final dates as the month ends. Tech, known as one of Hip Hop’s most prestigious independent entrepreneurs, might have shared a gem or two on the road with Freddie Gibbs because Gibbs shared a picture of the two with some nice words about the indie mogul. “I look up to @techn9ne. For one he’s the richest independent rapper in the game and he showed me how a man is supposed to handle himself in his darkest hour in the face of adversity. One of strongest niggaz I know. #IndependentGrindTour #Techn9chians #EvilSeeds,” Gibbs wrote. With the quality of music Gibbs is churning out, he’s on the right path to the same success.

Here’s one way to avoid paying child support: hop on your private jet and fly out to Brazil to attend one of the biggest cultural events in sports, World Cup 2014. According to Page Six, Fugees member Pras Michel was due in court Thursday afternoon to face the mother of his 3-year-old son, who is seeking more than double in her monthly child support. The “Ghetto Supastar” emcee is now a film producer and consultant, whose projects include Barack Obama’s presidential campaign and now-Haitian president Michel Martelly’s campaign. He also raked in more than $1 million last year, which he “failled to fully disclose” to the courts. Nevermind all that, he’s partying in Brazil with Leonardo DiCaprio (who doesn’t party with anyone, ask Beiber and traveled to the World Cup in a yacht because he’s awesome).