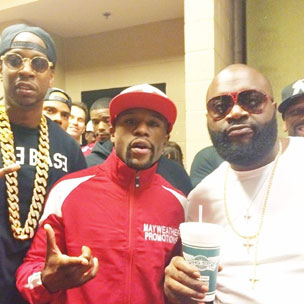 This week, athletes show their excitement about Lil Wayne’s upcoming Tha Carter V album, Rihanna pokes fun at Instagram for giving her a warning after she posted pictures from her topless French magazine cover, and 2 Chainz and Rick Ross walk Floyd Mayweather to his weigh-in for moral support. Check the rest of the week’s top Instagram posts below.

Before “Believe Me” actually dropped, boxer Floyd Mayweather posted a 15-second clip of Lil Wayne and Drake working in the studio, presumably for Wayne’s Tha Carter V. The only thing that can be heard and seen in the cryptic post was a piece of the instrumental and separate shots of Drake and Weezy nodding along to the beat by the boards. “Believe Me” turned out to be an almost 6-minute song, which you can listen to here, and if you’re wondering why Weezy didn’t just throw it on his Instagram, well he actually doesn’t have an official account. So he has elite professional athletes post for him.

Instagram doesn’t like nipples. Rihanna reportedly received a warning from Instagram after she posted her nude magazine pictures on the network, telling her that she’s at risk to have her account shut off permanently. Rih must love her IG account too much because she took her topless and bottomless pictures to Twitter instead. Click here for the skin-bearing pictures. Anyways, since Rihanna loves memes, she poked fun at the social media app for telling her to “cover up.”

$55,100. Let that number sink in. A lint roller costs under 5 dollars at Target, Walmart, anywhere. A lint roller dipped in some kind of hyped OVO swag juice adds about 5 more digits to its original price. According to reports, 1,200 limited edition Raptors/OVO rollers were given away at the game. The tagline read, “Bounce, helping keep Raptors and OVO fans lint free” but it should have read, “Bounce, helping Raptors and OVO fans pay off their credit cards and stay debt free” because $55,100 for a lint roller is utterly insane. Shout out to ebay user, ovolintrollers, on the huge come up. That quarter you missed because you were in line for the roller was not in vain.

After Donald Sterling’s racist remarks were heard around the world on Saturday morning, everyone was throwing in their comments left and right. Of course, rappers were in the mix, tweeting and instagramming their thoughts. Many chimed in saying they would buy the team, like YG, who said that if he bought the Los Angeles Clippers, he would rename to the Bompton Blippers. Thoughts? I mean it’s still technically in Los Angeles so if there was a stadium change it wouldn’t be too far. Why am I overthinking this?

No fondue, expensive art or lint rollers (actually I can’t vouch for that), just basketball. High-intensity adrenaline-rushing NBA playoffs basketball. Game 6 of the Toronto Raptors versus the Brooklyn Nets series took place Friday night which tied the series after the Nets beat Raptors. As you can see in this lovely collage, provided by Elliott Wilson, Drake was feeling the pain. That stare is the stare of a man who has invested time into being an elite street team member for a losing team. Game 7 takes place in Toronto.

King Push made his way to Larry King’s Larry King Show to talk about music, rap, life and more music. More specifically, in an intimate close setting, Pusha sat at the table across from Larry King about dream collaborations, gay rappers and more. Speaking of which, Pusha named Jay Z and Nas as his dream collaborations. Not a bad choice. The two took a break from talking to snap a quick picture for Instagram because you know how the goes, “picture or it didn’t happen.”

Another athlete showing love to sports professionals’ favorite artist Lil Wayne. Or could it be Lil Wayne cashing on a favor for the “Kobe Bryant” musical ode from 2009?Kobe Bryant kicked off Tha Carter V season with promo art for the album. After the red Roman numeral on a white background was posted, the internet went wild thinking it was Weezy’s album cover. Wayne’s manager eventually yelled at everyone propelling the rumors that it wasn’t the album art via Twitter so we might still have a chance to see Lil Wayne’s kid picture on the cover.

Musicians always have friends on tour capturing random moments with their smartphones. Mac Miller is that friend and traveling with ScHoolboy Q on Q’s Oxymoron tour while capturing random moments. There was a mango moment, a sleeping moment and this, just a regular I’m-doing-a-drop moment. Mac Miller, Q and company seem to have a lot of fun together. The Oxymoron tour finished its U.S. dates earlier this week and is now a world tour. Make sure you catch a show before it ends June 6th in the United Kingdom.

Pharrell Williams caught serious shine at Thursday’s iHeartRadio Music Awards after he was handed the first-ever iHeartRadio Innovator award and closed out the show with a stellar performance. Collaborator and fellow “The Voice” coach Gwen Stefani presented him with the award after reciting a touching speech and playing a montage of other fellow musicians and celebrities, like Beyonce, Oprah, Shakira, John Legend and more, praising him. The “Happy” rapper/producer/innovator took the stage and performed a medley of hits, all of which you can see here.

When being escorted to the boxing ring by celebrities isn’t enough, Floyd Mayweather turns it up a notch and has 2 Chainz and Rick Ross walk with him to his weigh-in. Floyd Mayweather is fighting Marcos Maidana Saturday night (May 3rd) and had to follow proper protocol like every other boxer. We’re just not too sure how many boxers have big-named rappers walking them to their pre-match events. But hey, it’s entertaining to watch. And look, Rick Ross managed to get a Wingstop foam cup in a picture that was liked 96,000 times. Everyone wins.