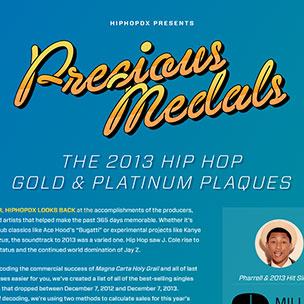 Each year, HipHopDX looks back at the accomplishments of the producers, emcees and artists that helped make the past 365 days memorable. Whether it’s revisiting club classics like Ace Hood’s “Bugatti” or experimental projects like Kanye West’s Yeezus, the soundtrack to 2013 was a varied one. Hip Hop saw J. Cole’s rise to superstar status and the continued world domination of Jay Z.

To make decoding the commercial success of Magna Carta Holy Grail and all of last year’s releases easier for you, we’ve created a list of all of the best-selling singles and albums that dropped between December 7, 2012 and December 7, 2013. Speaking of decoding, we’re using two methods to calculate sales for this year’s edition of “Precious Medals.” Nielsen—which is a global information and management company—produces a weekly SoundScan report we use to verify album sales. Our annual tally of album and single sales are also substantiated by the Recording Industry Association of America—the trade organization that supports and promotes the creative and financial vitality of the major music companies. These are two completely separate entities, and that may help explain why the math in albums sales can get so confusing. The RIAA instituted the practice of issuing gold and platinum awards based upon sales; hence the name “Precious Medals.”

Take a look at the artists who helped make 2013 another successful year for Hip Hop.

2013 Rap Albums And Singles That Went Gold And Platinum 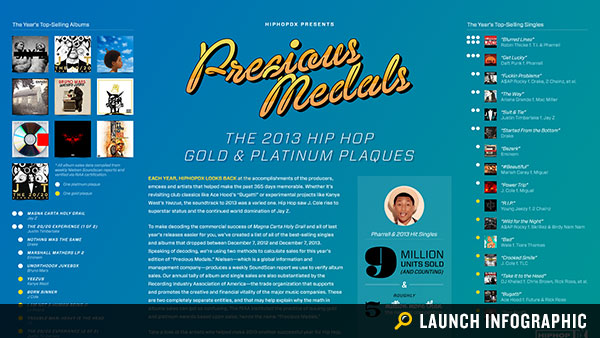