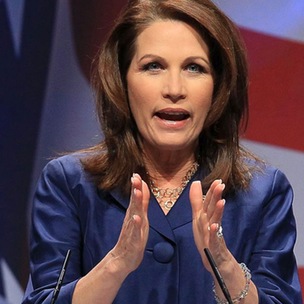 Get Your Mind Right: ?uestlove vs. Michele Bachmann

Sometimes, the entertainment gods bring together two personalities that are absolutely made for each other.

This is not one of those times.

In light of the latest controversy featuring (insert rapper here) and (insert prominent public figure here), I thought it would be fun to see exactly who emerged victorious in the Michele Bachmann vs. ?uestlove fiasco. For those that missed it, Republican Presidential hopeful Michele Bachmann recently made an appearance on “Late Night with Jimmy Fallon”, where she was given what many considered a highly inappropriate musical introduction by Fallon’s house band (aka The Roots). Long story-short, ?uestlove played a festive rendition of Fishbone’s 1985 track “Lyin’ Ass Bitch”

as Bachmann was introduced on the show, apparently as an ode to her recent controversial revisionist views on chattel slavery. 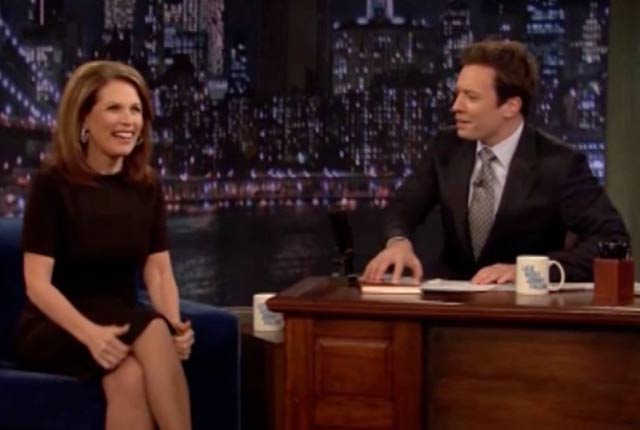 Before we recount the post-show blow for blow debacle, let’s introduce our fighters.

Ahmir “?uestLove” Thompson: ?uestlove is the leader of arguably the dopest band in Rap history. The Roots have (since 1987) given us 14 studio albums, the latest of which is out this week on Def Jam. ?uestlove is one of only two members of the group that have been along for the whole ride, the other being Black Thought.

Michele Bachmann: Tea Party supporter Michele Bachmann is a congresswoman from Minnesota. As of this writing she is running for the Republican presidential nomination.

Michele Bachmann essentially got called a “lyin’ ass bitch” on national television, and then cried about it to anyone who would listen—ultimately earning an apology out of everyone involved. ?uestlove has essentially cowered and recanted, and even alluded to his fear of losing his job.

Pitchfork.com asked him: “Was there a moment when you were scared that you might get fired? His response: “Yeah, last Wednesday, the day before [Thanksgiving]. We were seeing where she was going to go with it because, if you call the right channels, next thing you know advertisers are in the NBC building asking for proper action to be done. So we were definitely waiting with bated breath.”

What the hell? Almost 20 years of Grammy awards, world-tours, endorsement deals, and albums with Jay-Z and you’re sweating a job? With all due respect, Philadelphia should be ashamed, bro.

Interestingly, The Roots do have a new album out. Coincidence? I think not. In an era where pre-fabricated, elaborate publicity stunts are standard operating procedure in entertainment media, we’d have to be pretty naïve to think that this just happened to happen right before their album came out. Maybe, just maybe, we ought to give ?uestlove credit for finally trying to capitalize on the mainstream traction afforded by the Fallon market. Millions of people who didn’t even know that The Roots were “The Roots” were talking about them at the water cooler.

Meanwhile, Bachmann has emerged from the situation relatively unscathed…with some sources indicating a slight Bachmann bump in the polls. Of course, Bachmann has a better chance at winning a Soul Train Award than getting elected president. But if she does, this incident will be considered a catalyst. If not, she’ll still be the redeemed congresswoman martyr who set that uppity Negro straight. Either way, her appearance on Fallon to promote her new book (which came out the same day) has turned out to be a publicity dream.

If not for the spineless apology, I’d give this one to ?uestlove all day. But, even with his wimpery, he still deserves a lot a credit for pulling the stunt in the first place. I (for one) appreciate it when artists aim their angst at the system and its managers, rather than at each other. ?uestlove’s incident ranks right up there with Pink’s artistic criticism of the Bush Administration,  Jay-Z’s f-bombs for George Bush himself, Eminem’s long running feud with The Gore and Cheney families and Kanye’s vintage post-Katrina stunt.

Bachmann on the other hand, showed just how un-hood she really is. After being alerted to the would-be diss, she did what any soft, pampered, spoiled hack would do: she complained. So, even with ?uestlove’s eventual cowardice and frailty, this one goes to the ’fro.

Round 4: The Race Card

The best part of the circus surrounding “Frogate” was how scared everyone was to point out Bachmann’s obvious playing of the race card. Sure, she never referred to ?uestlove or The Roots as African American, or to herself as white. But she did invoke Michelle Obama by offering, “I think the point is, if that had been Michelle Obama who had come out on stage, and if that song had been played for Michelle Obama, I have no doubt that NBC would have apologized to her and likely they could have fired the drummer, at least suspended him…”

Um, hello?  Why is Michelle Obama’s name in Michele Bachmann’s mouth? It can’t be because Bachmann wanted to draw a parallel between her and another female running for office, ‘cause Michelle Obama has never run for anything. It can’t be because Obama was on the show and got different treatment, ‘cause she’s never set foot on Fallon’s set. So what exactly was Bachmann getting at? You got it: race. Her offense at being referred to as “bitch” is offensive given the fact that black women routinely get called bitch (and worse) in Hip Hop everyday. In fact, they’ve grown so fond of it, many call themselves bitch. As a would-be American president, shouldn’t Bachmann be offended by that? Has she ever done or said anything about the sexism, violence, and misogyny leveraged against black women on an hourly basis by American corporations like Sony, Universal, and Warner Music Group? Her taking exception to being called what black women are basically known as, and then referencing a black woman who has nothing to do with anything speaks very clearly to Bachmann’s racist worldview…and to her intellectual infancy.

To be fair, ?uestlove has played a race card or three of his own, by claiming to be the victim of racial harassment at the hands of angry Tea Party members on Twitter. He told Pitchfork.com, “I’ve seen some really colorful epithets in the past four days, but “nigger fuckhead ghetto stick” is probably the one that takes the cake. I’m still trying to get my head around that one. Blocking 3,500 tea party extremists [on Twitter] in a three day period is no fun, especially when you’re a drummer dangerously close to carpal tunnel.”

It is unclear whether or not ?uestlove was authorized to play the Fishbone track during Bachmann’s intro, but he has held the company line by refusing to throw Fallon or the show’s producers under the proverbial bus. He hasn’t even so much as pointed-out that The Roots have a history of playing clever music on cue to poke fun at or even give props to Fallon’s guests.

Some would credit him for taking-one-for-the-team like that. Not me. I see ?uestlove’s attempts at protecting his bosses as Fiddler-esque. He could have used this opportunity to comment on the hypocrisy of NBC’s enlisting (and benefitting from) a Hip Hop band known for biting social commentary and phenomenal music genius only to renounce the social commentary when the heat got turned up. He could have reminded Michele Bachmann that he is an artist, and that if she does not like his art then she does not have to listen. He could have told NBC what they could do with their promises to “severely reprimand” him. IF ?uestlove had done any of the above, he would have demanded the respect of everyone who’s ever heard a Roots album. Instead, his pandering loyalty to his corporate masters only served to alienate his real fans, the ones that he’s been performing for for more than a decade.

Those of us old enough to remember Super Bowl XXXVII know that Frogate is just the latest episode where Black artist is trusted to entertain, steps out of line, and then is reprimanded by the white moral authority. The moral authority takes no responsibility for the supposed infraction, instead pointing the finger at the individual artist, who happily shoulders the blame.  Jimmy Fallon is simply the new Justin Timberlake.

Ultimately, Bachmann wins in a nail-biter (2-1). But Get Your Mind Right: Hip Hop is the real loser here.