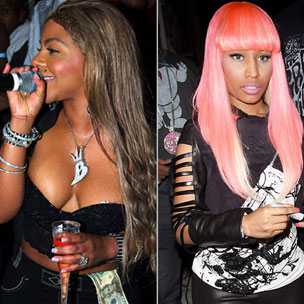 Get Your Mind Right: I Dream of Nicki

When I woke up this morning my phone said it was 2010.

Two-thousand and ten. The future. We. Are. In. The. Future. I remember when just saying “2010” sounded futuristic. For all the ‘90s babies reading this wondering what I’m talking about: fuck your life.

In 2010, Magic ain’t got AIDS no more. Compton’s most wanted gets paid for being “Very funny™”. Michael Jackson is DEAD.  The Roots are on Jimmy Kimmel. The 2nd Black president talks about Black people less than the 1st one did. We have rappers called Wacka Flocka Flame and Soulja Boy Tell ‘Em, and Jay-not-for-nothing-never-happen-Z is married and beefing with MC Hammer. African Queens have blond hair and sworn cop killers play police detectives on television. In 2010, Hip Hop is a Bieber-flavored, carbohydrate-filled energy drink that the old school doesn’t seem to want to taste.

When I heard that Nicki Minaj was beefing with Lil’ Kim, I was saddened. Not because I’m a Lil’ Kim fan mind you… I’m not. I was about to write about how crucial it is that the system (i.e. America) conditions Black folks to mistrust, envy, and despise themselves so much so that they can’t understand other Black folks who are not their own age. I was going to break down the dynamics of institutional racism and the deleterious effects of white supremacy on Black folks’ generational understandings of themselves. I was gonna end it all with a positive answer to the madness and pathology.

Now, I don’t wanna do that anymore. Kim’s lyrical onslaught made me realize something that should have been obvious from the start. Old school rappers beefing with new school rappers has nothing to do with race. No-thing. You know why? Because (to my knowledge) nothing either of them has said about each other has the slightest thing to do with Black people, being Black, black cards, or even Fergie (you’ll get it later). Now that I think about it, I’m not sure Lil’ Kim has ever said anything about being Black. And I know Nicki Minaj hasn’t. This is not some debate about some topic of substance or relevance. This isn’t about prisons or health-care or education or crack or AIDS or police brutality or food poisoning or poverty or Mumia. Those things are racial.

This is about mind control.  The music industry has control of our minds.  The music industry’s propaganda machine (a/k/a Hip Hop journalism) has for years told us of a golden era in Hip Hop: A mythical time when Rap was pure and wholesome and not all commercial like it is these days. We love tales about yesteryear as if the air was cleaner or something back then. Okay so, actually the air was cleaner back then but that is besides the point.

I say fuck that. I was born in 1979. I don’t remember any “golden era” in Hip Hop.  I remember when MC Hammer was HOT. I remember being salty because the ‘my’ in My Adidas didn’t exist. If it was golden, it was because of the gold chains and medallions, not because it was anything to hold on to culturally. My favorite song in 10th grade was Slick Rick’s “Treat Her Like A Prostitute.” How’s that for golden?

Nowadays, the system (i.e. America) has mind-fucked us so hard for so long that there’s nothing else to do. There’s literally nowhere else to go. Let’s forget about the fact that one of Lil’ Kim’s wayward progeny has started smoking the sort of crack that makes you bite the hand that feeds you. The fact that we accepted/embraced/celebrated Lil Kim in the first place is problematic. Have you ever seen Lil’ Kim?

We are at the point now where we’re so dazed that a clown like Nicki Minaj actually makes Lil’ Kim more relevant. Well, what if the whole narrative of a golden-age turned sour was a load of shit?  What if the industry and its minions (i.e. Hip Hop journalists) are just fueling so-called beefs between who is hot this afternoon and who was hot this morning because they want us to perceive there to be a difference between the two “artists”that are for the most part THE SAME. As it turns out, this works particularly well in hip hop for two reasons: artist cloning, and radio program formats.

In a 2007 essay titled Hip Hop Directions Nashid Fareed-Ma’at discusses how the practice of sampling music in Hip Hop ultimately had the effect of limiting and reducing it to replicas of the American Pop music genres that preceded it (e.g. R&B, Soul, Disco and Funk acts, Reggae). This is why, Ma-at argues, most Rap songs stick to pre-designed structural templates, such as: verse – chorus -verse – chorus – bridge – chorus – end1.

“The musical language of Pop music, and correspondingly commercial R&B, Soul, Disco, and Funk is very limited. Thus, many songs sound like other (previous) songs (in composition, content, style) creating a dynamic of repetitiveness in the music. A strong factor in this is that record companies like to use formulas of past hits on present songs: it made money before, it will probably do so again.” –p.4

Thus, exploration and artistic creativity are necessarily the enemies of the music industrial complex. In fact, Ma-at argues (and I tend to agree) that Hip Hop’s preoccupation with rhyming itself is evidence of a narrowed focus and industry-imposed restricted creativity. Rappers are, of course, musical poets. And of course, poetry doesn’t have to rhyme. But, here in the States we can barely imagine a Rap song not rhyming; whereas music in other parts of the world is not nearly as limited.  Psychologically this is important, because this extreme, American-produced focus on rhyme-schemes (to the detriment of other dimensions of the music) reduces the diversity of the sounds and facilitates the “dynamic of repetitiveness” currently witnessed in the music industry.

So if American songs are reduced to the lowest common denominator and then patterned after earlier “successful” versions, why wouldn’t artists themselves be replicated? Artist cloning is simply the next step in a logical progression. I don’t even have to call any names to make this point. Virtually every commercially successful rapper in the last 15 years has had an obvious predecessor. Of course, when old school confronts new over industry territory, the old school is quick to point this out (Kim says that she birthed Nicki Minaj 486 times on that track). Rather than see the invisible hand of oppression, we blame each other. We should see how corporate profit motives engineered the inevitable clash between two individuals forced to fit into the same pre-fabricated mold; instead we see a battle, biting, dick-riding, or some other clever euphemism for coonery.

“But ” you say… “I can choose which music I want to listen to and which music I don’t.” Well, unfortunately this is only partially true. Not only is the corporation literally behind the music (you think you know but you have no idea), they are also largely in control of what music we actually hear. On this point, Ma-at is precise, recounting how as a kid growing-up in the Bronx, (the celebrated birthplace of Hip Hop), he was introduced to it through (you guessed it) the radio.

Artist cloning would never work if not for the structure of radio. After ensuring that any product they “release” is sufficiently similar to a previously successful product, the music industry then resells us on this product via spectacularly redundant radio programming formats.

Consider this: according to media and mass communications expert Dr. Jared Ball, what many people do not know is that on any given week only two corporations (Universal Music Group and Sony Music) own at least 80%, and usually upwards of 95%, of all the songs making the radio’s Top 20. These companies either own or pay radio stations to ensure that their songs, and only their songs, are played…and played often. Ball estimates that this corporate muscle is responsible for 20-40,000 spins per song, per month. In other words, a UMG or Sony Music song is playing on the radio “every minute of every hour of every single solitary day.”2 * Through a well-known psychological process called the mere exposure effect (https://hiphopdx.com/editorials/id.811/title.get-your-mind-right-lyrics-on-the-brain) the heavy rotation of an extremely small sample of artists actually makes the listener like those songs/artists more.

Super-companies ensure that “new” is an illusion; they literally harp and depend on the proverbial same old song. The typical Rap album produced today has dozens of “guest” appearances, and a record with only one artist on it is virtually obsolete. Songs on the radio sound a lot like all of the other songs on the radio. This explains why even the most dedicated listener wouldn’t be able to tell you exactly who was on the radio just a couple of years ago. They don’t remember. And who can blame them? After a while, it all starts to blend together.

And that’s the point. The only way that Onika Maraj and Kimberly Jones can fight each other is if Nicki Minaj and Lil’ Kim are different.  They are not. They are not different on purpose. The reason we can not see that is because we are asleep, perfectly happy to have our dreams dreamt for us.

Brian Carey Sims, Ph. D is a North Carolina-based author, journalist, lecturer and assistant professor at North Carolina A&T University. He is also executive director of the Hip Hop Journalists Association (HHJA). He has contributed to The Journal of Pan African Studies, Journal of Black Psychology and HipHopDX.com. Visit his website here.