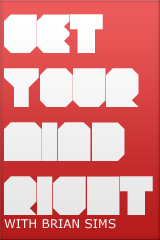 Get Your Mind Right: Lyrics On The Brain

When I was a kid I used to hear people say that music doesn’t really have any effect on you, and that it is possible to listen to hip hop “just for the beat”. After all, the actual messages in music only influence you if you let them. Right?

This argument usually comes from people wishing to justify listening to music with lewd, negative or offensive lyrical content.

I grew up the son of a church deacon & and a Sunday school teacher, and I was conflicted because I loved listening to music that clearly contradicted my Christian value system. So I did what any red blooded American would: I rationalized.

I told myself that I could listen to rappers preach drugs and violence and that it would not alter my mentality. I convinced myself that all the songs about how women are bitches were not going to make me really think that all women are bitches. And let’s not forget the classic: listening to other people use the n-word is way different that using it yourself.

You probably have your own personal versions of the above ideas and if you’re like me there are a million verses that you could sing in your sleep that you’d never admit to embracing. Songs like “XXplosive” off of Dr. Dre’s Chronic 2001 come to mind:

Relax one night, and paid to stay wit hoes

Captain Save’Em all day (bitch) well save this dick

Bitch nigga, you more of a bitch than a bitch

You ain’t into hittin pussy, or hittin the switch

You into hittin bitches off of the grip, you punk bitch.

And a personal favorite of mine (shout-out to Biko) from a Youngbloodz track:

I’m supposed to stop but I can’t (Uh-huh)

And I’m addicted to money, cars and clothes.

Do it big then.

Now before you go accusing me of bashing hip hop or hating on artist’s freedom of speech, let me just say one thing: shut up.

I’m fully aware that most hip hop music is nothing like the aforementioned verses and that some of the most beautiful art in the world comes from hip hop artists. Clever, inspirational, provocative, intelligent rhymes and ideas are in my opinion what make hip hop grand. And I’m not into social commentary on what rappers should be saying or what they shouldn’t be saying. I leave that to the Al Sharpton’s and Bill O’Reilly’s of the world.

But it is an interesting question: how do words in music influence us? The issue certainly continues to be debated by record companies, artists, censorship advocates, parent groups, school boards and state and federal government. A quick look at some of the research on the topic may shed some light.

While it has been suggested that the lyrics in rap and other controversial music promote everything from aggression, bigotry, and violence to drug use, sexual promiscuity, and even suicide, actual findings from research are mixed. For example, in 1995 a study was conducted to determine if music or lyrical content could affect suicidal thoughts and anxiety. Volunteers listened to six different songs that were either heavy metal or rap crossed with three different lyrical themes. The three themes were nonviolent, homicidal, and suicidal lyrics. To make sure that that the participants would actually listen carefully to the lyrics without giving away the true nature of the study, the experimenters told the participants they were being tested to see how much they could remember. They were then given a survey to measure their depression, anxiety, and suicidal ideation. The results indicated that neither music nor lyrical content had an immediate effect on state anxiety. Ironically, the non-violent rap songs elicited higher scores on the survey than the violent rap songs did. Two years later, another researcher conducted another study that had participants read either sad or happy lyrics while listening to instrumental music to measure if the lyrics had any effect on one’s mood. Turns out that they didn’t.

Of course, there are tons of other studies that say that music can and does affect us psychologically. This is certainly not hard to understand. Everyone at some point has put in a song to “set the mood”, or get ready for the game, etc. But lyrics’ effects on our brains don’t stop there.

The priming effect is a well-documented phenomenon that works like this: When your brain is exposed to any stimulus (e.g. a picture of a snake) it conditions you to react in a predictable way to subsequent stimuli. For example, if you see a picture of a baby, you are likely to associate whatever you see after that with stuff relevant to babies. Don’t believe it? Try this: read the following paragraph. Then, fill in the missing letters in the word list below.

Julia and Rob hit it off right away. They had been giving each other the eye ever since Rob showed up at the bar. One introduction, 2 hours, and 3 drinks later they were both ready to “go somewhere a little less noisy”. They ended up at Rob’s apartment, where they discovered that they couldn’t keep their hands off each other any longer. Julia unbuttoned her blouse and walked into the bedroom. “ I think I’d better hit the sack” she says, looking over her shoulder.

Chances are you chose 1.Sex, 2.Bang, 3.Suck, 4.Kiss, 5.Breast, and 6.Touch. If so you’ve demonstrated the priming effect. The sexually oriented story pre-disposed you to responding with words associated with sex. (I chose 1.Sox, 2.Band, 3.Tuck, 4.Miss, 5.Breeze, and 6.Teach)

But what does priming have to do with lyrics? Well, a lot. If you buy the legitimacy of the priming principle, then it follows that we can be primed by virtually anything- including lyrics heard not read. That literally means that the words and images conjured up by your favorite rapper don’t just go in one ear and out the other. They make you more likely to associate future stimuli with the subject and topics discussed in the lyrics themselves.

In psychology there’s a phenomenon known as the Mere Exposure Effect. Basically, it states that the more an individual is exposed to something the more that person will come to like it. This effect has been produced over and over again in research, and applies everything: objects, people, symbols, tastes, smells…everything.

This helps explain how it is that you can hear a song on the radio for the first time and hate it, only to end-up singing along a week or so later. Merely being exposed to something is enough to make you like it.

Apply this principle to the lyrical content in rap music and it’s easy to see how topics and subjects that are initially unpleasant can gradually become more tolerable and eventually even preferred. As an example my wife has noted (repeatedly) that I develop a bit of a “potty mouth” after reviewing hip hop albums… quite probably a result of the exposure to the characteristic explicit language permeating contemporary hip hop.

So, the debate will continue. For my money it is clear that lyrics can influence mood & emotion, not to mention cognitive areas like imagination and creativity. Both the priming and mere exposure effects have taken their toll on me as well. I’d be lying if I said that snap-music hasn’t grown on me since moving to North Carolina or that I don’t succumb to using hip hop clichés from time to time.

Get your mind right: identifying the potential psychological effects of lyrics is key.