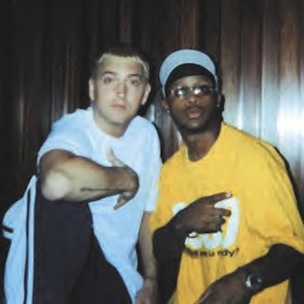 There are people out there who would have told you a couple years ago that Eminem and Royce Da 5’9″ were the great group that got away. The Hip Hop version of the Missed Connections section on Craigslist, minus the romance and all. Early in their careers they collaborated frequently, always sounding like they’d been rhyming together forever. They recorded several singles on Game Recordings in 1998 under the name Bad Meets Evil. When Eminem signed to Aftermath and blew up, Royce was his guy. It was Royce who got the guest appearance on The Slim Shady LP, not D12. Even though Royce missed out on The Marshall Mathers LP, things were still good. That same year Royce even made a song dedicated to his pale partner-in-rhyme (“Let’s Grow” from the Lyricist Lounge 2 compilation).

They continued to record together in 2001, which produced “Rock City” for Royce’s debut of the same name which eventually came out on Koch in 2002 as Rock City 2.0. They also recorded “Renegades,” which had Royce borrowing Eminem’s rhyme scheme from “Dead Wrong.” Unfortunately for Royce, Interscope wouldn’t clear Eminen for the song and it is now a classic in Jigga’s catalog instead. The following year Royce had a falling out with Proof and D12, largely a misunderstanding, and he and Em stopped speaking. After several diss songs from both camps, Royce issued a letter online explaining his side of things.

It took five years and Proof’s death before the hurt feelings were gone, but the two still weren’t speaking. A year later in the spring of 2008 they were, as Royce revealed to DX that the beef had been squashed. That was all well and good, but people wanted them back in the booth together. It was baby steps though, in early 2009 Royce addressed his past with Shady on his verse from Slaughterhouse’s “Move On

.” Later that year the ball really began rolling, Royce said that a Slaughterhouse/Shady Records deal was possible. Over a year later, the deal still isn’t signed but is said to be imminent. Much more importantly, the Detroit emcees have hit the booth together for the first time in nearly a decade. This week two new songs have leaked, with Bad and Evil sounded better together than ever.

What The Beat (f. Method Man)