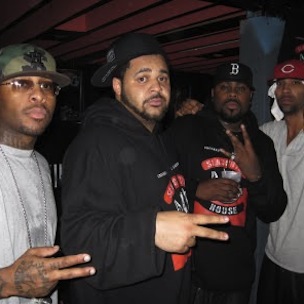 Since Royce’s reconciliation with Eminem last year and Slaughterhouse appeared in the “Forever” video with Eminem, the rumours that the foursome were signing with Shady Records have been persistant.

While Royce told fans in April that the deal was a week from being done, the contract has still not been signed. Joe Budden is confident that the deal is as good as done, and told Power 105 they have a release date in mind.

“We are just about [signed to Shady Records]. It’s so premature. It’s four artists and a deal like that is just extremely complicated when you have four individual entities but the great thing about it is Em is just so passionate about hip-hop,” Joey told Power 105’s DJ Envy. “Everything that this group was formed around, he is in 200 percent support of so shout-out to him as well. Late 2011 [our Shady Records debut will drop], I’ll go on the record and say that.”

The union was first hinted at in the early spring of 2009, but it was the fall of that year when Royce spoke about the possible deal. “I’ve been talking to Em and Paul [Rosenberg, Eminem’s manager] for a long time,” said Royce. “With this particular situation, things are falling into place. Everything is in place where it’s supposed to be. I’m very prepared [for] when the opportunity presented itself. It’s a time where there’s things they need over here and certain things we need in order to move over there. I think it’s a good marriage. Like I said, I just hope it can happen.”