What You Didn't See At The Ozone Awards Part 1

Before we get into another edition of “What You Didn’t See…,” the Bad Guys have a question to ask all of our readers.

Have you ever been to a zoo filled with humans and completely devoid of cages? How about a three ring circus of niggatry? If, for some reason, you say yes. Then you will be called a liar because the greatest show on earth was called the 2008 Ozone Awards/TJs DJs Conference in Houston Texas the weekend before last, and “the shit was bananas (B-A-N-A-N-A-S)!” Now before you say that the term “zoo” means something bad, let me explain what a zoo is. As many of you know, a zoo can be a fun place to be. You get to see animals that you probably wouldn’t see doing uncivilized things anywhere else. Some of these animals don’t function well with others while some can be a complete blast to be around. There are also a few animals that can be quite dangerous when wandering amongst the common folk. But there’s some others that you just want to pet and feed.

*Disclaimer: By now way are we saying that all Hip Hop events are filled with animals. It’s just a helluva theme to run with that makes perfect sense on what the weekend consisted of. And if you don’t like zoo’s then F*ck You!*

We’re also going to keep a tally of these things:

Without further adieu, the Bad Guys present to you:

Landing in Texas at noon, the Bad Guys made their way to the Hilton Americas to capture the first glimpse of how the weekend may play out. With the hotel employees looking on in disbelief at all the grills, chains and big rumpshakers floundering about, it was immediately perceived that they had no idea what they had just gotten themselves into. After checking in, DX joined the good fellas from Swurv Radio (shout out to Osiris & Ben) for a jaunt across the city to the private Belvedere & Moet pool party at Mosaic.

Finding out there are two Mosaics sucked, but to lighten the mood we took a detour through the Houston to see what it was like in the place where artists like Bun B [click to read] and Mike Jones call home. We got our first glimpse of southern hospitality immediately.

If you are trying to be as straight to the point as possible with your business and as stereotypical in your approach as you can; What would you name your chicken establishment? 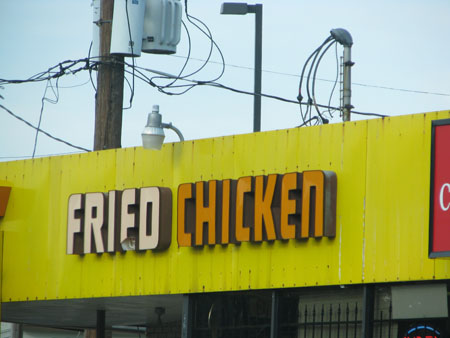 That’s right! Fried-fucking-chicken. That’s it. No Kentucky Fried Chicken. No Good Fried Chicken. Not even Big Mama’s Fried Chicken. Just fried chicken. And it was right down the street from Jamican Me Hungry. No bullshit. If you don’t get it, stop reading and join your child in kindergarten.

Houston Zoo! Shame on you!

After having failed mission #2 in our pocket while venturing to the second Mosaic only to find they didn’t know what the hell we were talking about [FAILED MISSION -2], we decided to make our way to Dave & Buster’s for Bun B’s pool tournament and Nelly’s Celebowl bowling event. This is when the zoo was officially in full swing. Free food, women and every southern artists cooling out like a family reunion proved that this would be a special weekend. Slapping 5s with some other industry heads kept everything cool as Nelly, Chamillionaire, Killer Mike, Bun B, Slim Thug and others got their game on inside of Dave & Buster’s. But enough of the swordsmen.

When you have specimens such as this… 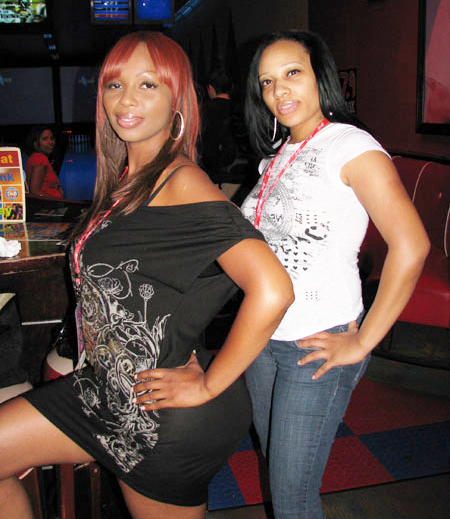 You must agree that God is blessing only a few of you out there [VANGLORIOUS MISSIONS +1].

What better place to save the heathens if you are one of those Jesus freaks? That’s right! If blackness means trouble than Dave & Buster’s was the black hole on this night. You could almost sense that a few calls were made for more security as soon as the sagging jeans, big jewelry and grills filled up the venue. And it was honestly pretty offensive to see some young children of God try to save our souls while there’s a whole country of people that need Jesus. Debating these self proclaimed “messengers” was bad enough, but then the boys in blue (what we will call the “zookeepers”) flooded the area and proceeded to shut shit down a half hour before it was to be officially over with [Cops -1]. 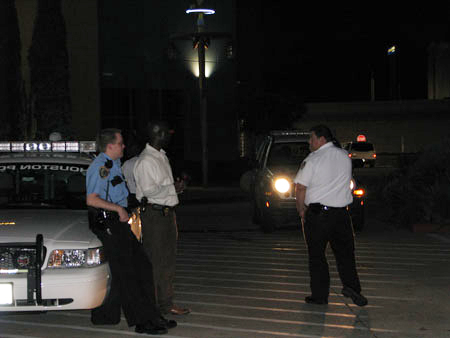 Everybody at Dave & Buster’s was peaceful but Hip Hop continues to carry the “WE ARE TROUBLE” label wherever we go. Good thing we haven’t seen a fight yet or a situation like last year…yet.

After photographing the zookeepers, the Bad Guys hit Bar Rio for the official Welcome To Houston Party. Lots of liquor, more women and more southern music. It was actually all good until we heard over the speakers, “Move Dem Buttcheeks!”

Wait a tick…I must be buggin’. That cannot be the song from The Boondocks, can it? Then I remembered being handed a flyer from the TMI Boyz about their new single. 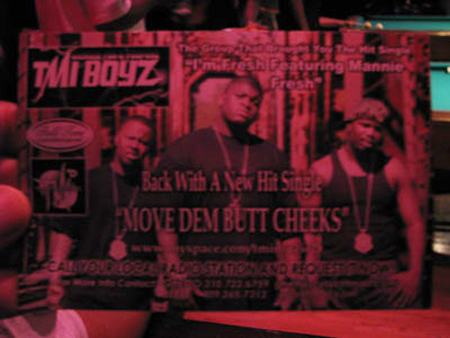 Forgot everything else that happened that night…just wandered home like zombies and turned it in.

It’s a tight race but as long as there aren’t any fights, the Bad Guys are winning!

The first day of the TJ’s DJ’s Conference proved its worth. The festivities kicked off with a management panel hosted by Wendy Day featuring some of the men behind the men giving their two cents to aspiring rappers and producers looking on. Rick Ross’ manager E-Class and T.I.’s manager Clay Evans would offer the most brutally honest advice about what a manager should and shouldn’t do. A young lady asked about being a rapper and getting proper management when E-Class simply stated, “Stop acting like a nigga.” That’s probably the realest advice said the entire panel [SOUTHERN HOSPITALITY +1].

The hotel slowly was beginning to manifest itself into the zoo as those that wanted to be in the industry and those already in the industry filled the room up. There was only one slight problem: the misuse of the term “networking.” See, while there are some who actually become a sponge and soak up all the useful information that the panelists have to offer, there are those who define “networking” as chasing tail. All through the hotel the vultures were circling their prey. At any given moment, a sharp tug on the arm followed by some witty one liner would follow. Some would be victorious while others would come up with epic failures. To call this “networking” was an insult to those that really are trying to learn something. While I must admit, the abundance of chickens outnumbered the working ladies made the prey even more tantalizing, it would truly would damper the experience to a certain degree (or enhance depending on your definition of networking).

The deejay panel would be up next as deejays gave some valuable insight to the crowded room. Many aspiring artists wondered what it would take to get their music played while deejays simply wanted to find out how to be down. Everything would be peaceful until somebody just had to start something with Core DJs CEO Tony Neal. Just peep the video to see southern hospitality in its truest form.

And so a fight was avoided. Whew!

Big Boi [click to read] would treat the patrons to a sneak preview of his upcoming Sir Lucious Left Foot album in a small suite. The jam packed room was filled with bubbly beauties and all the Ciroc Vodka and Crunk Juice you could shake a stick at. While absorbing the album, Killer Mike would show up to lend support to his friend. Always good to see friends turned foes turn to friends again. Mike dropped us a line regarding the end of the beef the nearly turned toxic.

But while the peace was kept, guess who showed up? The zookeepers shutting shit down again. 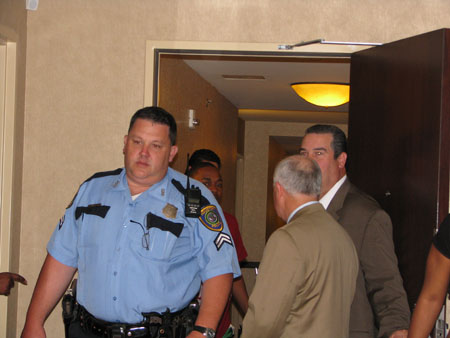 But wait a second… 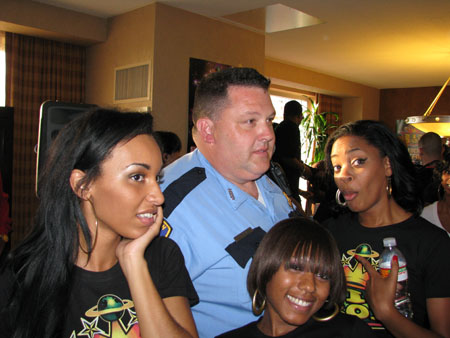 Zookeepers love the animals too!

I know he’s hoping his superior doesn’t see that one!

On a random note…

The word on the street has been that Bushwick Bill has turned to the gospel and stopped consuming alcoholic beverages. 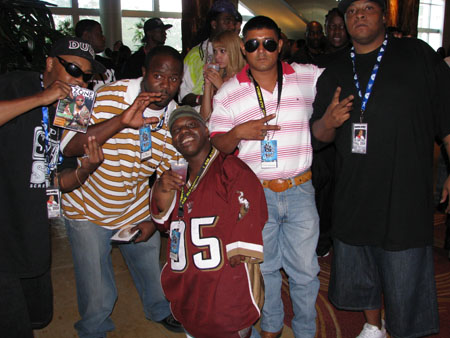 Almost had me…almost! The night would wrap up with more free food followed by the TJs DJs Tastemakers afterparty @ Club Glo. The line was asinine so the Bad Guys posted outside and waited our turn to get in. But guess who showed up again? 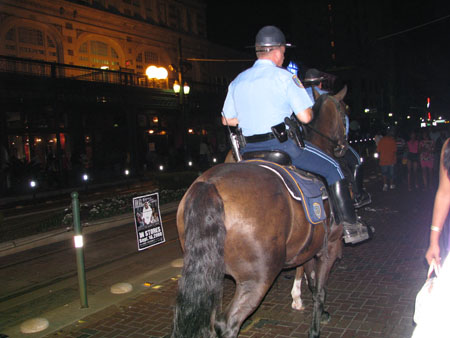 And I damn near thought we’d get through this weekend without an altercation.

We’ll see how it goes down in days three and four!

All Photos By Anthony Springer Jr