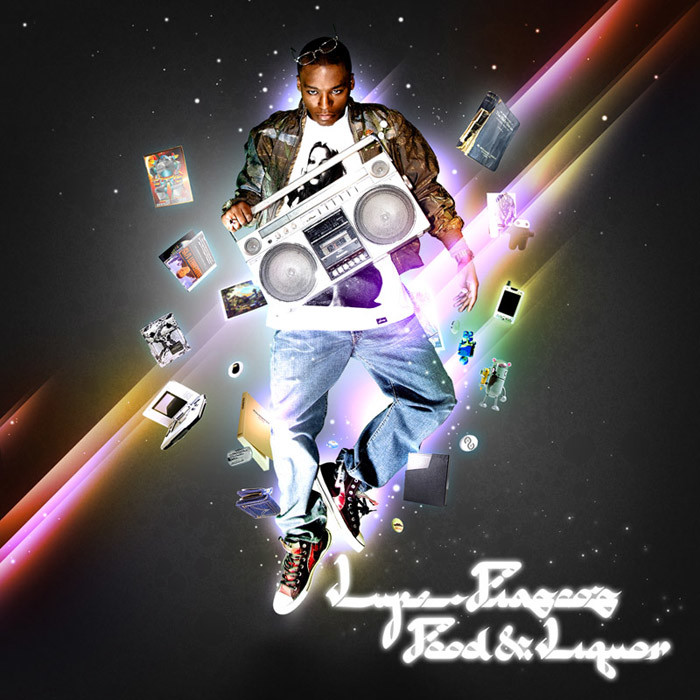 There comes a time when a change is in need. Amongst a persistently stale Hip Hop scene lies artists that want to “change the game” but aren’t embodying what it takes to be the change. Most end up trying to become their predecessors while others masquerade as the next big thing without understanding that the next big thing never needed to call his or herself that. Titles like those are bestowed upon them by the public… Malcolm and Che didn’t say they were revolutionaries, they were revolutionary. In Hip Hop we have had artists like Tupac, Rakim, Biggie, Jay-Z and Nas who came in with something special that turned the game upside down. By being themselves they elevated the stakes to parts unknown and forever etched their name onto the stone tablets of Hip Hop. And then comes Wasulu Jaco, better known as Lupe Fiasco.

Lupe Fiasco isn’t your typical emcee. The Chi-town native doesn’t look tough, doesn’t sport crazy ice and won’t be seen popping bottles at your favorite club. Hell…the kid would rather admire his shoe collection and action figures while playing a game of Tony Hawk rather than chill with his ice grilling entourage at the club spitting pimp game at gold diggin video hoes. Some see him as a skater or
a “backpacker” but, alas, Lupe is a straight up nerd. He wears glasses (not shades), skateboards and does everything opposite of what your favorite rapper does. Now don’t get the term “nerd” confused with the likes of Kanye West and Pharrell. It can be argued that Pharrell is too cool to be a real nerd and Kanye is a nerd trying to be a superstar. Lupe embraces his nerd and that’s what makes him different.  But beneath all the nerd dress lies an absolute rhyme animal – an animal that caught the attention of Jay-Z and pulled the Def Jam president in to executive produce his debut album …and Lupe isn’t even on his label! From murdering the mixtape scene with his Fahrenheit 1/15 series to making his mainstream debut alongside Kanye West on “Touch The Sky” and then dropping the jaws of everyone with the unconventional single about skateboarding “Kick Push,” Lupe’s buzz turned from underground rumble to full blown commotion.

Then it happened. The single thing that usually can destroy a career before it starts is called “The Leak.” While many at Atlantic may have panicked when Lupe’s debut album, Food & Liquor, got into the hands of the bootlegger, it only affirmed what many had alluded to previously – this kid is for real! So here we are, almost three months since the leak hit and Lupe Fiasco brings to us Lupe Fiasco’s Food & Liquor.

Is it everything we hoped for?

After introducing us with a brief spoken word piece by a young lady on the corner, Lupe Fiasco explodes into the hard guitar-driven “Real.” The perfect introduction with the opening lines “My man wanted something real/something he could recognize and something he can feel” and proceeds to deliver the goods in a manner that is unprecedented in Hip Hop today. His style shifts and changes on the drop of a dime and he works his breath control effortlessly. He doesn’t slow up after “Real”; instead he proceeds to accelerate his craft on each and every track.  He gives Jay-Z an absolute run for his money on “Pressure,” rips double entendres and splits syllables on “Just Might Be Okay” and takes it light on the women without being sappy on “Sunshine.”  While all these songs are superb, it would take entirely too long to focus on them alone. With this review I’d rather focus on what moves this album above and beyond anything heard in the last decade.

What is astonishing about this album that it is 80% narrative. What Lupe is able to do is use his abstract imagination and tell remarkable stories with his use very vivid and descriptive language. What catapults him to another level of storyteller is the unbelievable “The Cool.” Amongst a ridiculous spaced out backdrop courtesy of Kanye West, Lupe weaves the tale of a former gangster who bursts from his grave and takes to the street to witness the world his lifestyle removed him from. Check how he describes the gangsta’s resurrection…

To conceive a tale this witty is feasible but to verbalize it on a song is unreal. With the theme “Hustler for death/No Heaven For A Gangsta” closing out the song, Lupe is able to speak of society’s ills.  He takes the narration to the next level by explaining his own maturation on the Needlz-produced “Hate Me Soul” with lines like; “Now I ain’t tryin to be the greatest/I used to hate Hip Hop, yup, because the women degraded/but Too Short made me laugh like a hypocrite I played it/A hypocrite I stated though I only recited half/Omitting the word ‘bitch’/cursing I wouldn’t say it/Me and dog couldn’t relate until a bitch I dated/forgive my favorite word for hers and hers alike/but I learned it from a song I heard and sorta liked.” While juxtaposing the transformation of Hip Hop with his own personal growth, Lupe is able to deliver like no other. He even explains his early disdain for his executive producer by saying; “I had a ghetto boy bop/a Jay-Z boycott/cause he said that he ‘never prayed to God he prayed to Gatti’/I’m thinking ‘Godly, God guard me from the ungodly’/but by my 30th watchin of Streets is Watching/I was back to giving props again” Introspective anecdotes like these give Lupe a certain edge. Even the radio-friendly “Kick Push” has a message intertwined with skateboarding anthem.  He is
able to do this so effortlessly and never once comes off as preachy. He is simply observing and scrutinizing his surroundings as any growing man would (did I mention he is only 24?).

But what would dope lyrics be without the perfect production? Soundtrakk and Prolyfic handle a bulk of the production in house and are able to create a soundscape that captures the essence of Fiasco’s
being without the use of big-name and big-budget producers for sure shot hits (with the exception of the Pharrell-assisted “I Gotcha” and Kanye West’s aforementioned “The Cool”). It’s a “risk” to create an album with this much hype without the big names, but the producers do much more than just hold their
own as they support Lupe’s style extraordinarily well. From the sonic grooves of “Daydream” (produced by Craig Kallman) featuring the beautiful voice of Jill Scott, to the Spanish grooves that compliment Lupe’s observation of America on “American Terrorist” featuring Matthew Santos, Soundtrakk, Prolyfic and the rest do an astounding job of elevating the album from just lyrically inclined to instant classic status.

For those who remember when Nas dropped Illmatic, the critics knelt and gave praise to his game-changing opus while the platinum plaques came much later. So while Lupe Fiasco has become the
quintessential next big thing, he will also suffer the same unfortunate fate that many others before him had to deal with… having to wait for people to digest how special this man’s gift truly is.  When you are this far ahead of your time you have to remember that it will take even longer for the average listener to catch up. But for those of you who have been yearning for the day that someone will take Hip Hop upon their shoulders and hoist it to the next level, fear not because the future is here and he comes in the form of Wasulu Jaco – otherwise known as Lupe Fiasco.