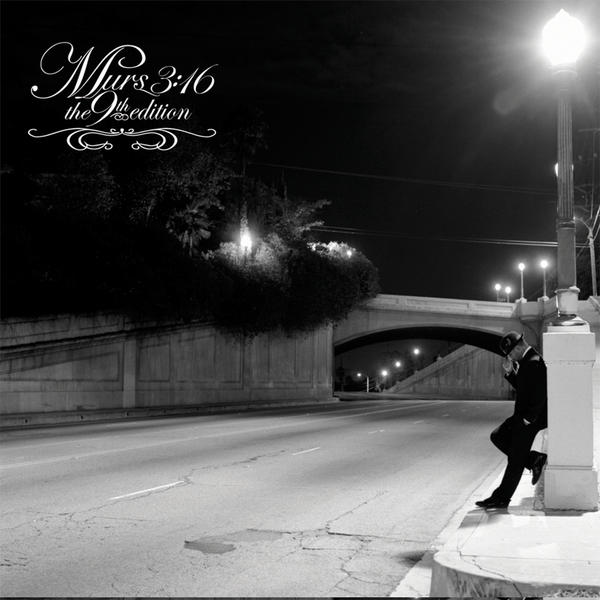 This is one of those albums you just know are gonna be dope. That is, if you know both the parties involved. In case you don’t, allow me to give you a quick briefing…

Producer: 9th Wonder – One third of North Carolina’s Little Brother and member of the Justus League collective, originator of the producer remix album, producer of “Threat” from The Black Album, maker of soulful beats versed in the ways of Pete Rock and Jay Dee.

Did I mention how talented they both are? So 9th provides 10 beats, and Murs brings you into his world via his rhymes 10 times. From the intro the method of Murs is best captured when he says “this is more than music/by buying this disk you have bought into a movement/not a revolutionary/nothing but the truth I carry/change if you wanna change that karma is for you to carry/all I’m tryin’ to do is just lighten your load.” Later on in 3:16 he further states his cause over a classic 9th beat; “they get up on TV steady clownin’ for fame/disrespecting ancestors that was bound in them chains/but I’m around in the game so things bound to change/I’m trying to walk that thin line between intelligence and ignorance/have a little fun while making music of significance.” Indeed he does make some music of significance. “This Is For…” is a butter-smooth 9th offering in which Murs tackles plenty of issues in hip-hop. To little surprise his addressing of the white audience has stirred up the most shit, but only those guilty of his labels will be offended.

Where Murs really shines here is his incredible storytelling, “Walk Like a Man” is as good as it gets as Murs tells a gripping story of loss and revenge over a three part 9th Wonder beat (word to Primo). “Trevor and Them” is just as well told and gotdamn hilarious to boot. While he is pretty much outshined by 9th‘s madness, “H-U-S-T-L-E” is a great depiction of Murs‘ entrepreneurial abilities. As with all of Murs‘ past work, a portion of the album is dedicated to the fairer sex. No matter which angle Murs approaches it from, he kills it. He struggles with women’s desires on the reggae-inspired “Bad Man!” His frustration turns to “The Pain” as Murs gets a bit more solemn over a weeping instrumental. “Freak These Tales” is yet another example of his storytelling prowess and a great collection of raunchy narratives.

The one drawback of Murs 3:16 The 9th Edition is also one of its strengths; the length. At 10 tracks and less than 40 minutes it is short and sweet, with everything connecting on all cylinders. But when “The Animal” with Phonte closes out the album in style you’re left fiending for more. Obviously that is a good thing too, but I still want more dammit. Other than that, I cannot imagine what anyone could complain about here.