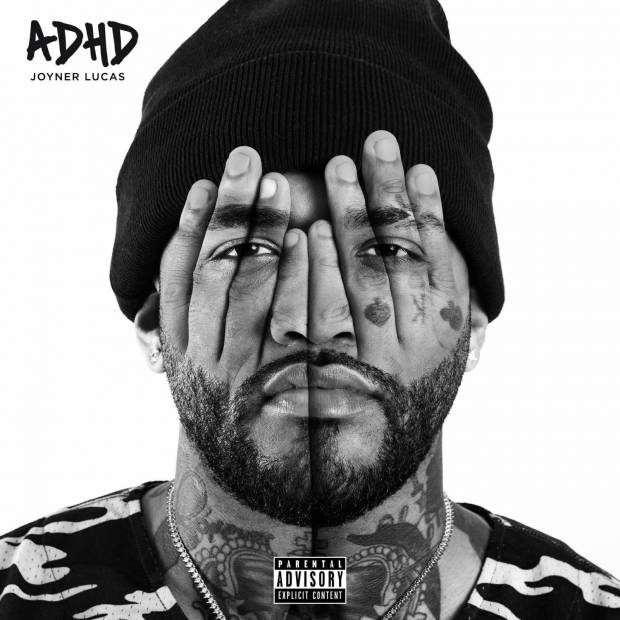 Give Joyner Lucas credit — he created a rollout that pairs beautifully with his album’s ADHD theme.

The road to release date goes all the way back to October 2018, when he emphatically stated his love for the money and success on “I Love.” The ensuing 18 months brought a torrential downpour of abrasive singles and big-budget videos, and both sonically and thematically, each song was more different than the last. He’s delivered lyrical miracle bars about terrorizing ADHD like the infamous Isis and dedicated a Stan song to childhood idol Will Smith, and through it all, the only constant was the steely man on the cover staring at you through his fingers.

It’s fitting, but that doesn’t mean it’s effective. Of the 18 songs on the album, a whopping nine tracks were previously released singles. Take away the four middling skits and that leaves only five new songs, of which only one — “Gold Mine” — is worth returning to. And thus, the “brand new” ADHD feels more like the end of a dreadfully long examination than anything resembling a highly-anticipated album.

Whether by design or not, Joyner’s inability to stay on track kills all possible momentum. He brings plenty of ambitious ideas, but dashes in and out so quickly that it’s hard to take any of them seriously. Every 15 minutes, a skit tries to wrangle it all back to the overarching topic of ADHD, but not once does Joyner dig deeper and actually explore the disorder that so clearly impedes any artistic development.

One might expect such revelations on the title track “ADHD,” but instead he chooses to talk up his own greatness while simultaneously self-distancing himself from all others. There’s more introspection on “I Lied,” when he admits how far he’s strayed from former promises, but it’s buried in his machine-gun flow that makes the listener duck for cover rather than lean in for a closer listen.

Ironically, the songs where he imitates mainstream flows and tropes are the album’s best moments. “Lotto” is a bonafide hit, complete with trembling strings and an infectious bounce that brings a rare moment of fun to the table. Timbaland supplies a similar bounce on “10 Bands,” and Joyner’s stutter-stop flow glides over the drums to devastating effect. And, the juxtaposition of subtle melodies and catchy flows lands with precision on “Gold Mine.”

Unfortunately, three makes on 18 tries aren’t enough to save the album. Especially when one of those misfires is the breathtakingly massive failure by the name of “Devil’s Work,” where Joyner swaps one death for another while playing judge, jury and executioner. Setting aside the mental image of Joyner stroking his beard as he decides who’s life to spare, the song is a crumbling column meant to support a colossal album, and unsurprisingly it’s not up for the task.

Combine the haughty sense of self-importance with his overwhelming desire for outside acceptance, and you have a recipe for disaster on ADHD. One thing is for certain: Whoever put the breaks on the mythical “What if I Was Gay” track deserves a badge of honor.

It’s too bad they weren’t loud enough to stop the rest of the album.