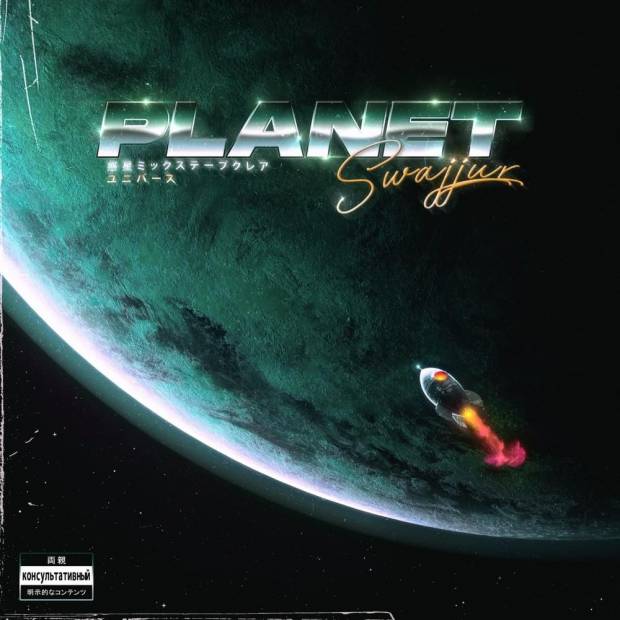 10k.caash checks off all the boxes that make Hip Hop purists groan and shake their heads, even without his alphanumerical moniker. Based in Dallas, the 18-year-old rapper/”The Woah” Creator (as he claims on TikTok) creates songs like Jolly Ranchers. The flavor’s artificial and you know it can’t be good for you. But that doesn’t stop you from making “one more” trip to the candy bowl.

Last year’s mixtape, The Creator crammed 14 of 10k.caash’s confectionaries into 22 minutes. He sounded like a kid brother, but a really endearing one that made guests like Rico Nasty find a vibe with him when they could’ve just phoned in their brief verses. Hell, even RiFF RAFF had a fun feature.

Planet Swajjur, also released by Def Jam, is fewer songs in fewer minutes. If you don’t care for 10k.caash in one minute, you won’t care for him after 16 minutes when the tape is over. It doesn’t earn an endorsement solely on not overstaying its welcome, but 10k.caash’s awareness of when to cut things off keeps it solid, if not occasionally self-limiting.

10k.caash typically emphasizes his verses with flows readymade for concert call-and-responses. It can grow a little samey, but it helps to keep things hype. While he usually matches well with blown-out bass and glitchy synths, sometimes he finds himself a bit too hype for the beat, like on the flute-led “Rocky Wrist.” Other times, he shows how versatile he can be, like when rapping over some groovy bass licks, courtesy of Ronny J, on “Hop Out.”

Lyrics aren’t why one listens to Planet Swajjur, but 10k.caash could’ve taken a few more chances, especially when it came to capitalizing on his go-for-broke nature. “Mosh pit, jump, just like Tigger,” is relatively quotable, but one song earlier, DSmooth66 provided the far-superior “I’m just a squirrel tryin’ to get a nut, but the bitch in my ear like a bug or somethin’.”

His chemistry with his features is strong, even if Chance The Rapper’s feature on “Me And My Friends” just incenses The Big Day haters more. Closer “Overtime” is the closest Planet Swajjur comes to feeling sensual, even if the lyrics are more concerned with getting in the spotlight than finding bedroom light.

Despite being from Texas, none of these tracks suggest we’ll ever see 10k.caash rocking a cowboy hat in any media appearances. Yet, he’s not unlike Lil Nas X, with his pocket-sized songs that thrive on melodicism and general likability from the person behind the mic. One track the Ty Fontaine-featuring “Crowd Roars,” sounds like it could be a B-side to “Panini.” Does 10k.caash have what it takes to spark a debate about genre classifications, break Billboard records, and scoop up Grammys?

Maybe not, but he can definitely keep the party going.