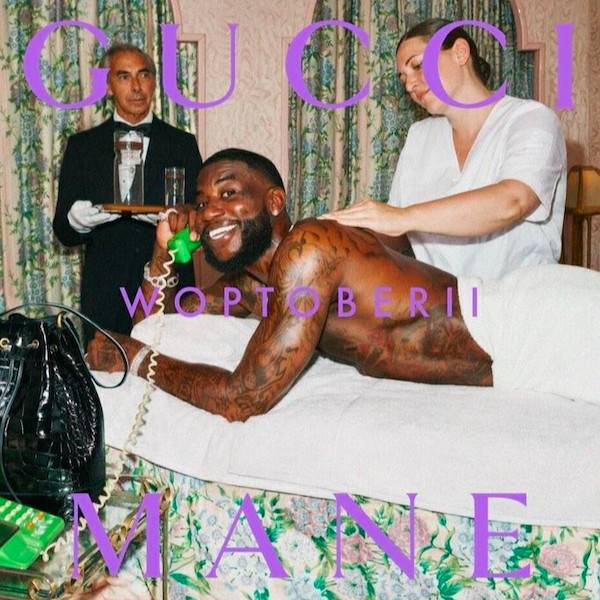 With a massive back catalog and a hand in the careers of almost every notable Hip Hop act from Atlanta over the past decade, Gucci Mane’s name is solidified.

However, with enough music to fuel close to 170 days of uninterrupted listening, it’s impossible not to hit some level of stagnation.

His latest release, the 13-song Woptober II, his second album of 2019, is a shining example.

The collection rests comfortably in a milieu between good and bad (albeit successful), giving Guwop fans what they’ve become acclimatized to in recent releases, continuing a trend started on this summer’s Delusions Of Grandeur: Wop on autopilot.

The bulk of this project’s highs come from collaborators and production choices. For example, what “Big Booty” featuring Megan The Stallion lacks in any originality, it makes up for with JWhite Did It’s playful flip of 2 Live Crew’s “Hoochie Mama” — which appeared on the Soundtrack of Ice Cube’s cult classic Friday. JWhite also flips The Showboys’ “Drag Rap” for “Move On” — the same sample used in David Banner’s “Like A Pimp” (and more recently Drake’s “In My Feelings”).

Not all the features sparkle. While Kevin Gates smashes “Bucking The System,” Kodak Black drops some of the project’s most cringy bars on “Big Boy Diamonds” (closely followed by “Tootsies”):

“Milkin’ these bitches like Yoo-hoo/Shit on these niggas, I doo-doo/I’m passin’ gas like I farted/Boy if you smelled it, you dealt it.”

Ultimately, this feels like an underwhelming body of work. With 101 releases — including mixtapes — under his belt, lack of motivation beyond dollars is understandable at this point. He fully understands his role in the industry and has little (if anything) left to prove to anyone.

That’s not to say he’s lost his edge as clearly he’s perfected the hit-making formula; instead, he remains a little too comfortable.

Though Delusions Of Grandeur had some bloat (to put it lightly), he did make some attempt at breaking new ground, like on “Special” with Latin-trap pioneer Anuel AA. Though formulaic to a fault, even his Justin Bieber feature fully committed to a full out crossover trajectory.

There is little here that challenges the listener — let alone Gucci himself. Your take away from it rests on how willing you are to listen to the ATL pillar cruise-control over particularly predictable soundscapes with lazy bars that make themselves malleable to mainstream playlists and simultaneously unworthy of multiple replays.

That being said, Gucci has been shown that he can revel and even thrive amid overt simplicity. His collaborative LP with Metro Boomin, DropTopWop, is a great example.

Also, as demonstrated on the album opener “Richer Than Errybody,” the 39-year-old rap star seems at ease among his younger guests DaBaby and YoungBoy Never Broke Again. While the creative minimalism may frustrate some listeners, there’s something to be said for being able to stay relevant so effortlessly.

At this rate, it’s not off-base to imagine the East Atlanta Santa as the South’s answer to E-40 as an elder statesman a decade from now, regardless if he decides to keep coasting or not.