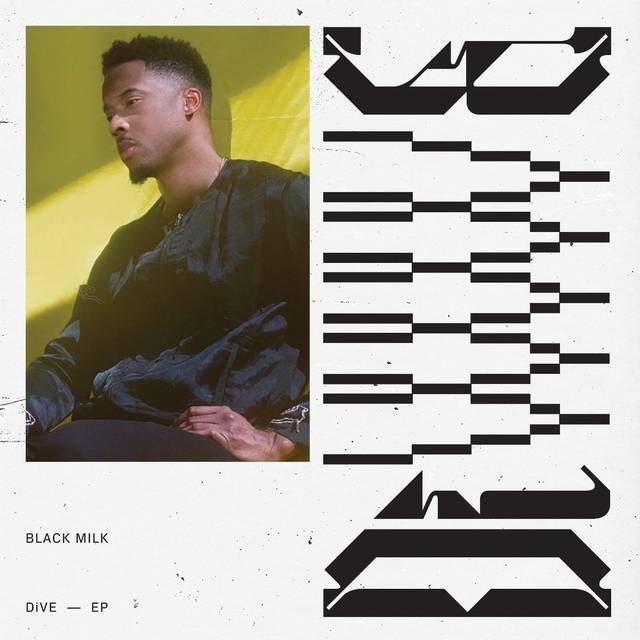 Black Milk has quietly been one of the most consistent Hip Hop artists for well over a decade. However, rather than fall into a pattern of reliable familiarity, Milk has spent the past few years exploring exciting new sounds. He’s at it again with DiVE, a clear improvement to last year’s Fever.

DiVE pleasantly sounds like Mos Def and J Dilla got drinks at an after-hours joint and started low-key jamming off-stage.

The theme of DiVE is to strive. Black Milk takes to the mic to simultaneously push himself forward and elevate others. Right from the opening “Save Yourself,” he encourages the need for self-preservation “Like it’s your last breath/This life is filled with landmines,could be your last steps/That makes me stomp even harder on this terrain I’m given/Don’t get distracted by getting paid and not pay attention.” In another MC’s hands, these words may sound preachy, but Milk’s wise positioning of himself amongst the crowd mark his words relatable rather than rebukeful.

Milk doesn’t stop there, dropping gems like he’s getting away on foot after a jewelry store heist. “Yeah, face your fear, makes you feel better/Twist and turn, you live you learn, and nothing lasts forever,” Milk declares on “TYME.” His simple sentiments are nonetheless universal truths that remain relevant as ever and stamp DiVE with a sense of timelessness.

☀️☀️DiVE Delivery . #DiVE physicals being shipped out. . Can order at blackmilk.biz/store, link in bio☝🏽

It’s not all a TED Talk. Milk is equally as engaging when he’s reflecting. “The message always was to make it and gettin’ money was the motto/Showin’ you what I know,” he laments on “If U Say.” Once again, his humility makes DiVE not only accessible, but endearing. His humble sentiments are underscored by subdued production. Sure, the drums knock like a bill collector, but the piano keys on “Relate (Want 2 Know)” are elegant in lieu of exciting. Laid-back doesn’t mean weak, though. “Out Loud” and “Now Begin” feature sonics strong enough to carry the tracks without lyrics, and add to the favorable lounge feel of the project.

Even the stutter-step drums and aspirational theme of “Black NASA” sound at home with the more relaxed cuts of the record, a feat achieved by Milk’s even conviction. However, this fluidity is both a positive and a detriment to the album. Milk favors cohesion to explosiveness here, which makes for a solid, well-crafted project. Yet, while the songs don’t run together, they don’t necessarily stick out.

This creates continuity but also leaves stand-outs to be desired.

An exception is the thumping “Don’t Say,” a scathing indictment of police officers who are complicit with some of their colleagues’ acts of terror. There is nothing hesitant about lyrics like “Since days of a youngin’, cops ain’t gave me one reason to trust ‘em.” The cut is a necessary, powerful fist raised in the air amongst a collection of mostly chilled-out joints.

Whether he’s triumphant or troubled, punctuating or peaceful, DiVE is always Milk’s show. He remains in the driver’s seat despite impressive turns by Sam Austins (“Black NASA”) and BJ The Chicago Kid (“If You Say”). Milk’s assertiveness makes for yet another solid entry in his catalog.

As he pondered on “Swimm,” when times are tough one either sinks or swims. In an era where Instagram posts and bad behavior seem to generate more attention than quality music, Black Milk chose to do another lap across Lake Michigan and come out stronger on the other side.