Review: Kaiju The Unconquerable’s ”Cringeworthy” Is Dripping With Character 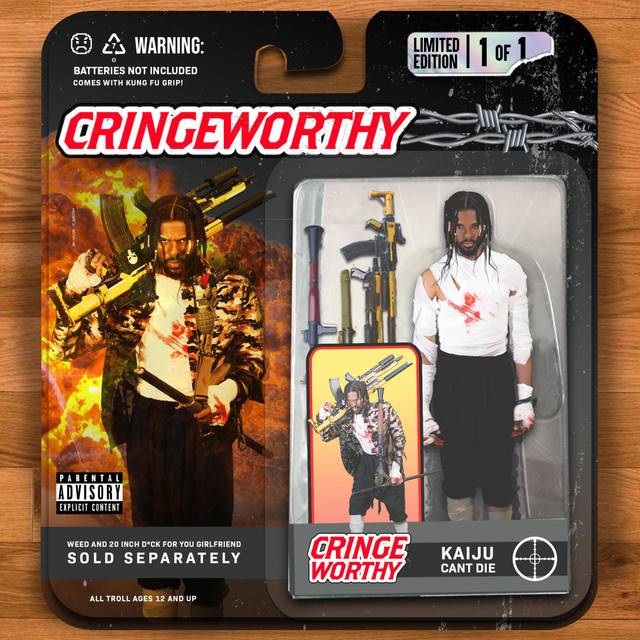 Miami MC Kaiju The Unconquerable is a niche artist in the best way possible. Much in the same vein of an artist like MF DOOM, his persona is carefully curated — based on comics and anime (in this case).

Though he seems to no longer be rocking the same mask he was seen wearing in his earlier visual mini-movies, his character remains intact. Unlike some artists who hug a similar lane, Kaiju manages to dominate by riding contemporary production that makes his music incredibly approachable — even if the “deep-cut” anime references fly over your head.

#CRINGEWORTHY ALBUM May 20th PRE-ORDER NOW ON iTunes and youll get the Cringeworthy song! Now 4 things 1. Shout out the trolls who's comments on my page when i posted episode 5 Forbidden all i saw on the comments was Cringeworthy yall said it and i ran with it and then i researched it and i guess im awkward as fuck 🖕🏾 2.when i was younger my favorite toys was Gi Joes i mean i stole most of mines from "Eckerds" for those who are younger generation thats now called CVS pharmacy and yes their Gi Joe collection was insane and no they cant charge me that was over a decade ago now im a action gi joe just so you know KB toys store was better then toys R us 4. ALBUM COVER OF THE YEAR HANDS DOWN DONT @ ME AND UNDERRATED ALBUM OF THE YEAR i called it word to my engineer plex Shout out to @awalthe1st I came with the idea and pics he delivered and kept discreet thank you for that brother i respect that and also my sista @dreamloudcreations who took these epic pics i know my ideas be crazy but come on now dont they always work 😭💯💪🏿 episode 11 coming soon!!! PRE- ORDER NOW! And if someone copy my shit just know yall seen it here first #kaijutheunconquerable #kaijucantdie #rap #hiphop #friday #miami #florida #california #losangeles #newyork #harlem #atlanta #houston #japan #hongkong #korea #london #uk #itunes #spotify #album #albumcover #jdm #albumoftheyear #newalbum #may20 #gijoe #actionfigures #episode10

His latest 12-song effort, Cringeworthy, is a surprisingly satisfying listen. The production, primarily crafted by Sdot Fire, with contributions by NYBangers, DopeBoyzMusic, Superstaar, Cooarri, are packed with just the right energy as Kaiju starts (and rarely lets up) with his aggressive onslaught that at times borders on cinematic hyperbole.

If that doesn’t quite make sense upon first read, his music videos are recommended. The eight-minute treatment for the project’s title track is a delicious blend of animation and over-the-top violence that takes place in a fictional future where the United States is plunged into a state of martial law following a tie in the presidential election (between Trump and Kamala Harris).

This video is an excellent illustration of the Kaiju character, as he’s been developed on this project and the perfect lens through which to experience it.

Tracks like “Blame the Dark,” which is swimming in gun talk — focusing specifically on the concept that his gun has a mind of its own — or the not-so-subtle nod to DMX’s classic “Stop Bein Greedy,” the Superstaar produced “Dog Named Rebel,” work to further this particular narrative. But these juxtapose (beautifully) with some the more infectious gems on the LP.

“GTR” shines because it doesn’t follow the narrative at all; it’s lyrically strong but has a playlist ready chorus brimming commercial appeal. “Hi Way” is the tracklist’s lowest tempo — breaking character again as he describes a pair of hazy sexual encounters.

A lot is going on this project, and beyond a surface listen, there is an abundance of gems scattered for listeners to uncover. “Pain Killers” is a gorgeous, motivational track, laden with powerful piano keys. With these moments of introspective insight, you’re still left to wonder who the hell Kaiju is. It’s curiously like MF DOOM without a mask, but again playing the villain.

Ultimately, it’s a series of songs loaded with bright imagery, trap vibes and — for those willing to (really) listen, sufficient nerdery to please even the staunchest Comic-Con crowd.

Even if you ignore the videos he’s been releasing over the past few years, the project knocks — with or without context.