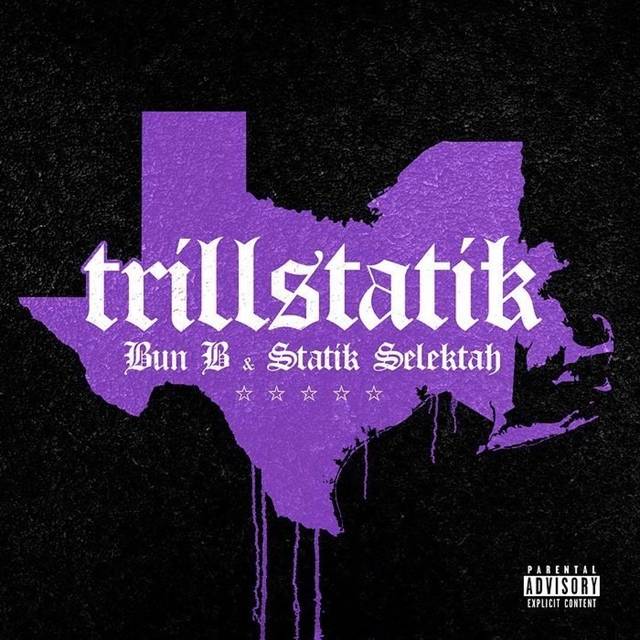 Any self-respecting Hip Hop fan knows that Bun B and Statik Selektah are seasoned Hip Hop veterans but also that their particular styles differ in sound, tone and twang. Stat’s beats bare an unwavering East coast boom-bap bounce while Bun practically fathered the molasses-paced southern slang rap style. A 2008 collab titled “Get out the Way” featuring Cory Mo (along with a few other loosies throughout the years) previewed the duo’s potential synergy but their joint album TrillStatik really harnesses their individual powers, intertwines them and then takes them to the next level.

After Bun delivers a short yet declarative intro track on “Moving Mountains,” the blissful binding of Boston boom-bap and Texas trill begins. With a little help from Method Man and Grafh, the record “Still Trill” is the epitome of Hip Hop purity. Stat’s beat neatly uses the ideal balance of vigorous drums, symbols, hi-hats and a groovy melody that lets the rappers — Bun specifically — get off bars that evoke the fuming emoji. “Basquiat” with Fat Joe and Smoke DZA keeps the same Hip Hop highbrow energy as well as “Concrete” with Westside Gunn and Termanology. When Bun raps “I got an ounce sittin’ in front of me/I’m about to sit back, relax and roll a blunt or three/And then a joint or two, and when I’m finished I’ma point at you/With bud that’s only smoked by an anointed few” it cuts through Stat’s jazzy instrumentation like a steak knife through a Texas T-bone.

Listeners can pick and choose the album’s best bravado rap lines until the longhorns come home. But what makes Bun’s performance so special are the few instances where he plays the role of Hip Hop shaman. 32 years of rap game experience has rendered Bun a certified elder statesman and not only does he spit wits as good or better as the youth but attempts to guide them at the same damn time. On “Superstarr.” Bun quite literally dishes out free game for those looking to navigate through pending fame and fortune. Lyrics like, “I call it like I see/Even if I don’t like the view” is downright gangsta and should be promptly placed in Hip Hop for Dummies.

As strong as this album is, what could have put it in the rafters of modern-day classics is substantially fewer features. The entire album, which consists of 14 tracks running just short of 50 minutes, has a whopping 19 featured guests. Some of the cameos make total sense (see Big K.R.I.T. and Talib Kweli on the hyper-reflective “Time Flies”). On the flipside, verses from Propain and Killa Kyleon on “TBA” are fairly bland filler features that just waste the song’s runtime. There isn’t one single song on the album where Bun’s vocals aren’t accompanied by someone else’s. Just imagine if they had locked in for a strictly solo effort in which the only time Bun’s raps were broken up was by Stat’s iconic scratches.

Despite the overcapacity tracklist, TrillStatik is still a refreshing bowl of chicken soup for the Hip Hop purist’s soul. Statik’s beats bring out the best in Bun’s astute lyrical delivery, which is unwaveringly authentic through and through. Anyone who decides to press play on this album is literally listening to two masters at work, firmly in their respective bags making music to fortify their legacies.

Houston, there are no problems here.