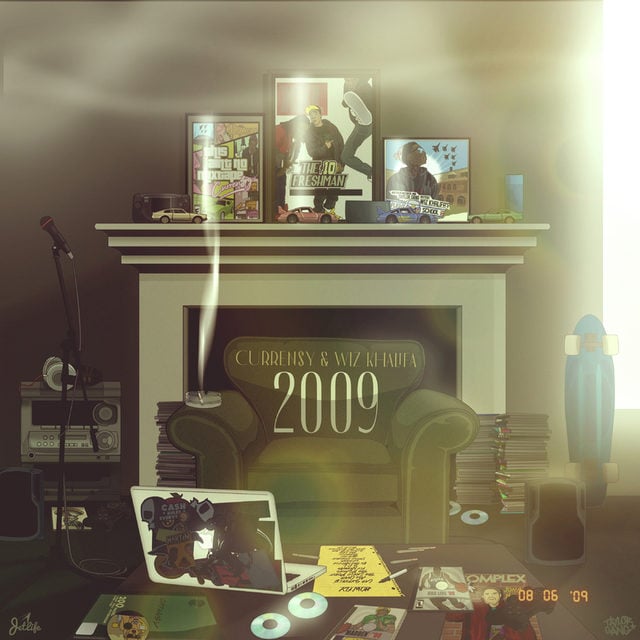 A decade might as well be an eternity in “rap years” and both Wiz Khalifa and Curren$y were in radically different places back in 2009. Wiz had yet to become a household name but was gaining traction on his stoner-driven tracks enticing the suburban potheads and beyond. Curren$y, who had recently left Young Money, was also on the rise in his brand-boosting lane, even putting out his first retail project that year.

So what do two smoked-out rhyme slingers do while both on the rise? Make a joint mixtape, of course – and that mixtape was 2009’s How Fly. It was a perfect brainchild that forged both MCs’ brand of music; relaxing beats with cool guyTM lines that was the audio equivalent of sitting in hotboxed Toyota Corolla for an hour. Even though both rappers (and listeners for that matter) haven’t come down off that project’s perma-high, the duo is back at it with the appropriately titled 2009 album.

The LP picks up exactly where How Fly left off; with a joint in one hand and the mic in the other. With the exception of rock infused “Garage Talk,” opening songs like “10 Piece” and “Benz Boys” featuring Ty Dolla $ign are mellowed out flex-a-thons that could have very well appeared on How Fly. There is no denying both artists have improved in the bars and delivery departments (Wiz catching more melodies and Curren$y sharpening his pen) but the “get high and talk shit” narrative is still very much a part of their collective prowess and the driving force behind this album. With that said, on “Find A Way” Curren$y explicitly says “That’s what G’s do, you smell that fire in the breeze, fool/Don’t you dare call this shit a part two/This a whole ‘nother animal”. Although it isn’t an exact replica of How Fly, it’s certainly not “a whole ‘nother animal” – it’s the same species at the very least.

The deeper you get down the 14-song long tracklist, the more 2009 begins to really feel like a CBD pill straight to the nervous system. Cardo, who helped in crafting a handful of track on the album, uses smooth drums and hazy melodies that let Wiz and Curren$y get off confidently calming verses that start and end with the sound of a weed smoke exhale. The aforementioned “Find A Way” along with “Eastside” sound so incredibly unforced it’s like the two were just talking about the high life with mics on. Lines like “Always been a young nigga with the vision and I’m still the same/Turned an idea into a strain” are a nice break from the Rollie talk and prove to be casually inspirational.

Obviously, the album doesn’t take itself too seriously and stays perfectly within both Wiz and Curren$y’s respective lanes but “From the Start” ultimately gets lost in the shuffle. What was meant to be an attempt at the classic “started from the bottom premise with a powerful female R&B chorus” falls flat with throwaway lines rendering it a diet “See You Again.” While “From The Start” evokes an immediate mash of the skip button, the crown jewel of 2009 lives within the three minutes of “Stoned Gentleman” where Wiz and Curren$y get to drive home their “Money is the mission” statement with boastful bars and catchy flows; something this album nails on the head with a hammer.

In many ways 2009 is like a big bong hit straight to the face. Once it hits your system, feelings of contentment and euphoria wash over you your psyche, reminding you that cool guyTM stoner rap is alive and well. But after about 40 minutes of smiling, nodding your head and agreeing with all of Wiz and Curren$y’s boastful lines, the project is over and life goes on.

Until the next hit.