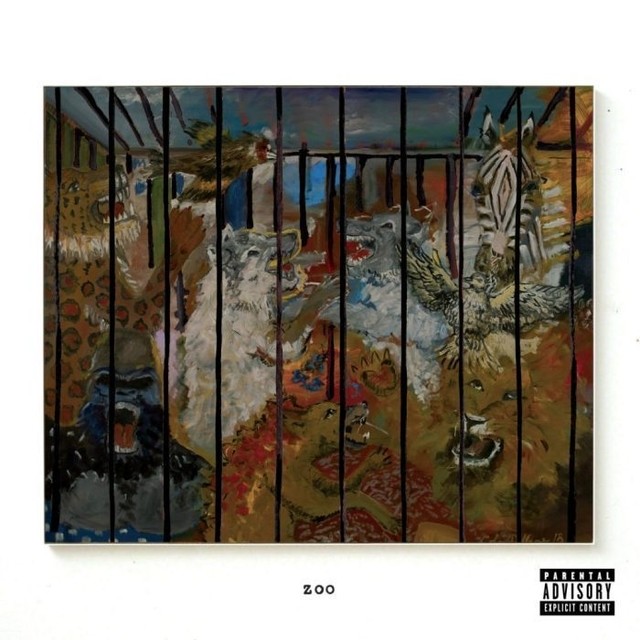 There is no denying that stardom has led Russ to curiously become one of Hip Hop’s most hated personas. Sure, he preaches how “DIY” he is every chance he gets and unforgivingly disregards those who slept on him during his ascension to rap’s higher tier (including mainstream rap media) — but don’t all rappers do that? Most rappers carry a similar abrasive attitude when addressing haters and critics though with the exact same colors, Russ appears to have painted a target on his own back making it cool™ to hate on Russ – especially on the Internet.

But Russ knows better than anyone, the best way to silence nonsensical haters is a two-pronged formula; make quality music that puts up serious numbers. He’s already put some serious numbers on the board with his 2017 debut There’s Really a Wolf thanks to a pair of hit singles (“What They Want” and “Losin Control”) but it’s his sophomore offering, ZOO, that moves his needle closer to the quality music category.

On the Scott Storch-produced album opener “The Flute Song” (which, for starters, should be in the conversation for beat of the year), Russ assumes the role of unsparing ZOO keeper to all his alleged inferior contemporaries. “They ain’t upholding the code, the industry full of some hoes/They lettin’ like anything go/People are shady as fuck/I keep to myself, but I feel the energy though/None of these people are friends to me though” quickly lets listeners know that it’s still Russ vs. everyone.

After the intro wraps up there is “Outlaw” where – you guessed it – he declares both his superiority and his impartiality from rap’s mainstream. On “Kill Them All,” he doubles down on his “shout out to me” mentality with lines like “Y’all so obsessed with me, I’ve never even talked to you bitches” and oddly specific callouts like “That y’all be payin’ social media agencies twenty thou’ every month/Just to comment, like, and follow your account/It’s all a front, y’all are glorified Instagram entertainers.”

In essence, the first three tracks are a giant “fuck you” to basically everyone who has ever doubted him and those who “can’t sell out Red Rocks” (except for Snoop Dogg and Rick Ross, who appear on “Last Forever”). The superior sentiment is felt but even by rapper standards it eventually becomes a redundant carousel of self-assurance; which can get dizzying. The best songs on ZOO are when he’s relaxed, honest and telling his own story instead of destroying other people’s.

ZOO lacks outright smash hits but it’s clear Russ’ focus for this sophomore offering was to make a project that was better-rounded than his debut – so in that case, mission accomplished. The album’s center is filled with strong yet soothingly produced cuts that highlight Russ’ strengths as a songwriter and storyteller. (“Missing You Crazy” and “Serious” tap into his past and present love affairs while “Parkston Drive” eloquently details his rollercoaster family woes over a perfectly sampled Sting guitar riff.)

If he continues making projects with this amount of balance, it won’t be hard to envision Russ being one of Hip Hop’s most celebrated instead of loathed.