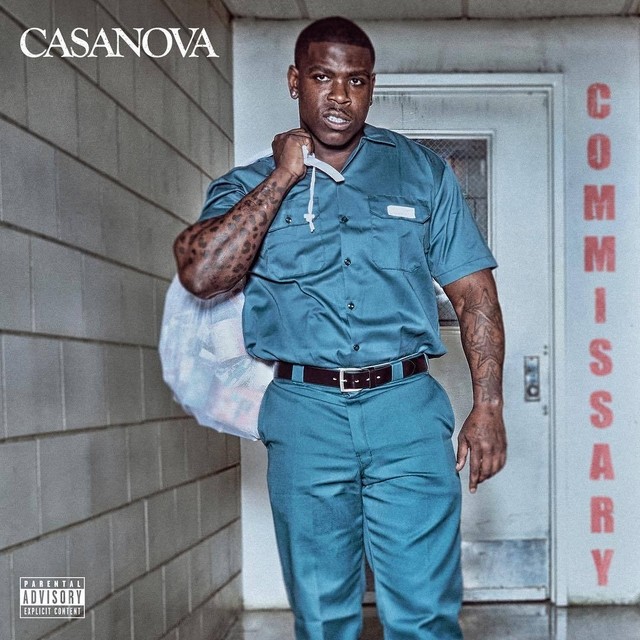 According to an extensive New York Times report, the Empire State’s notorious Rikers Island circulates about 77,000 people a year — with a disproportionate amount being Black males. Of the thousands who aspire to right their wrongs through rap songs, a select handful are fortunate to fully realize this dream.

This data is important because that’s where the story of Casanova 2X begins.

The Brooklyn-bred Caswell Senior has been open about his time in the correctional facility, for, like many up-and-coming rappers today, his short musical career was kerosene-fueled by intentions not to live as a disregarded reformed convict in society.

Now co-signed by Memphis Bleek and JAY-Z’s Roc Nation, Casanova irons out his entire rap sheet over the course of the nine songs on his Commissary EP.

Unlike most current New Yorker rappers, Casanova opts to body tracks akin to the days of G-Unit or Dipset, brandishing rapid-fire flows and throaty growls full of malice that are equally as menacing as his 6’4” frame. On “Gripped Up,” he terrorizes the frantic violin-meets-808s melody in the same manner a pitbull would massage a satin throw pillow. And “Set Trippin’” is a bottle-smashing, back-alley face-off anthem that proves Cas has the ability to churn out viable records without sacrificing his hood mentality for the music. Ditto for its felony-inducing remix that features O.T. Genasis and Mozzy.

The downside of Commissary is the handful of moments when the boisterous MC ventures outside the cellblock concept and attempts to put some records on his female fanbase’s books. While “Go BestFriend 2.0” is a decent club option thanks to familiar synths from Jahlil Beats’ soundboard and manicured verses from G-Eazy and Rich The Kid, the happy-go-lucky “Down Bitch” sounds like an A Boogie record Cas hopped on — as opposed to the opposite as it should be.

And while his scream raps are indeed an acquired taste, it’s unlikely the “Playa Hater”-esque “Why You Lie?” will have any of his existing supporters directing leery fans to the track. Although such a track shows everything in his world isn’t handcuffs and hollow tips, including such a comical addition on a short project just highlights its expendability; plain and simple.

Commissary may not hold tight to its prison-to-prosperity narrative like say Maino’s debut album, If Tomorrow Comes… but it does give hope that the only bars Casanova will be dealing with are inside the soundproof booth from this point on.