Review: Dr. Octagon Returns To Alien Form On "Moosebumps: An Exploration Into Horripilation" 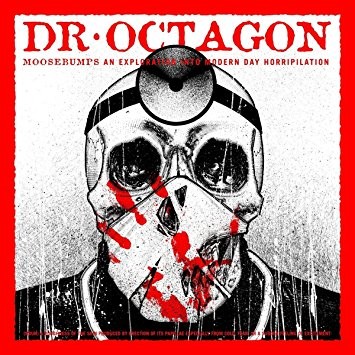 Twenty-two years later, Dr. Octagon’s resident weirdo Kool Keith, scratch master DJ QBert and veteran beatsmith Dan The Automator are back with their follow-up to 2006’s The Return Of Dr. Octagon — the ridiculously titled Moosebumps: An Exploration Into Horripilation.

Picking up right where they left off, Keith reemerges as a time-traveling, sex-crazed surgeon who spends his time dissecting the English language and stitching it back up in a way that only he truly understands.

With lines like, “Dr. Octagon sit on space beach with a bucket hat/ Way beyond the fitted and the snapback/ 3 point 5 million served/ My wings make you look like atomic birds/ Flying like a UFO with the rockets/ They must be sniffing stardust in their show/ Nasal so big I can fly aircraft up your nose,” it’s clear Keith hasn’t come back from whatever trip he’s been on since co-founding the Ultramagnetic MCs in 1984.

But that’s nothing new. Keith has built an entire career on his abstract, stream-of-consciousness rhymes, which scream loudly throughout the 11-track project.

From QBert’s otherworldly scratching skills on the “Bear Witness IV” instrumental to Keith’s ultra-twisted musings about life on “Operation Zero,” Moosebumps is a staunch reminder of why fans fell in love with the trio back in the day. It’s a predictable — yet unapologetically familiar — combination of traditional boom-bap, ethereal melodies and Keith’s descriptive, almost inappropriate sense of humor.

Aside from Del The Funky Homosapien scrubbing in for album highlight “3030 Meets The Doc Pt. 1,” Keith carries the bulk of the vocals.[apple_news_ad type=”any”]

Production wise, the album’s pace switches up constantly. Lead single “Octagon Octagon” gets Moosebumps off the ground with its driving bass while the nearly whimsical hook for “Flying Waterbed” could have been plucked from any indie rock ballad with its emotive feel. Even when the immediate aggressiveness of “Karma Sutra” is momentarily jarring, it’s tempered by the delicate sounds of a violin floating on top of the driving guitar riffs.

Elsewhere, the beat for album closer “Hollywood Tailswinging” puts an obvious spotlight on Keith’s lyrical style but paired with the dark intensity of the beat, it weighs too heavily and chops up the momentum as Keith raps about baby dinosaurs, alligators and cornbread.

QBert — who is historically the unsung hero of Dr. Octagon albums — is (and always has been) a voracious beast on the tables. The Invisibl Skratch Piklz vet consistently executes his flair for precise scratching and well-placed interludes. The aforementioned “Bear Witness IV” is actually a reimagined version of “Bear Witness,” which originally appeared on Dr. Octagonecologyst.

Not only is the fictional Dr. Octagon an orthopedic gynecologist from Jupiter, but his propensity for spitting X-Rated lyrics has shaped Keith’s legacy and continues to define his brand of rap. So, without the sexually explicit references on songs like “Area 54” and “Polka Dots,” would it really be a Dr. Octagon album? No.

But for those expecting Dr. Octagon to reinvent the proverbial wheel, they might want to think again. Dan The Automator will always produce some kind of weird jazz, funk and soul fusion, QBert will always deliver top-notch turntablism and Keith will always be, well, Keith.

Moosebumps may not move a million units but having Dr. Octagon taking patients again is an undeniably intriguing affair.