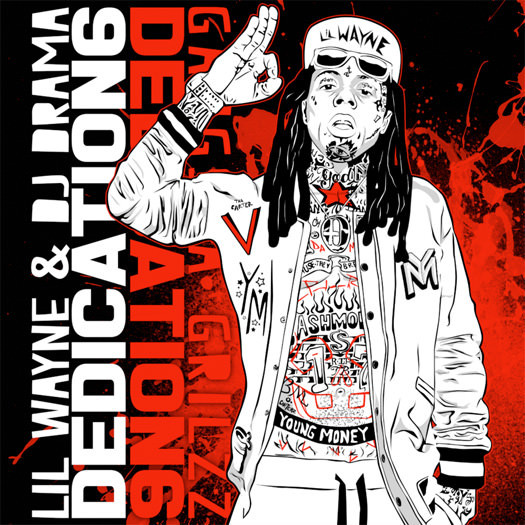 Awaiting the release of Lil Wayne and DJ Drama’s sixth installment of their coveted Dedication series could have been considered a nightmare before Christmas for his longtime supporters. Expectations for Wayne’s music have fallen suitably low over the past few years, leaving die-hards in a moral quandary. News of a new Wayne mixtape initially piques interests, especially when slapped with the sacred Dedication title, but the reality of Wayne’s current descending competence sets in shortly after, leaving fans understandably apprehensive.

There is, however, a glimmer of hope for D6’s seeing that Wayne’s Martian-like rhymes are summoned when paired with rival artist’s beats. The Dedication, No Ceilings, Da Drought or even Sorry 4 the Wait series all serve as prime examples of his extraterrestrial lyrical abilities. D6’s format is no exception and Wayne quickly and pleasantly falls back into old habits that made him the mixtape monster in the first place.

Off the rip, Kendrick Lamar’s “DNA” supplies “Fly Away” with the proper gasoline for fiery wordplay: “I got Doja, Narcotics, and Actavis; that’s DNA/She got Dollars, Nut, and Alcohol all over her T&A/I got Dracos, Ninos, Automatics; that my DNA.” Of course, questionable lines like, “My dick is an electric chair, feel the voltage” also spring up but ultimately, zany bars on a Wayne mixtape is inevitable.

“Blackin Out” does JAY-Z’s “The Story of O.J.” justice as The Dedicated One starts off with 16 bars of “Rich nigga, Polo nigga/House bigger, bills bigger” wordplay and even squeezes in a clever “O.J. on my wrist, nigga that’s Sunny Delight” line. While solo, he can hold his own but his dizzying lines about pussy and codeine get one-upped by Nicki Minaj’s testosterone on “5 Star.” While flowing over Post Malone’s “Rockstar” beat Nicki hits it with “Niggas don’t mean my race when they say she blacked/I am the Queen/I’m everything she lacks/Bitch get on your kneecap/I don’t mean C. Kaep” while Wayne pales in comparison with “Put my face up in her pussy and my thumb in her ass/Make her do the Jumpman.”

D6’s pinnacle comes in the form of his rendition of Lil Uzi Vert’s “XO Tour Life” and “Suwu,” his version of 6lack’s “PRBLMS.” The former catches Wayne is rare form coherently bobbing and weaving through TM88’s iconic beat with rapid-fire delivery. “Suwu” on the other hand is reminiscent of Wayne’s mid-2000 heyday and his use codeine as an artistic crutch. 6lack’s murky production is perfect for Wayne’s dazed Auto-Tune cries for drugs and unsavory women.

Ironically enough, new Lil Wayne mixtapes are like seeing relatives during the holidays. They only show up maybe once a year, usually hit you with the same conversation topics and your excitement fades just as quickly as it appeared. Luckily, Dedication 6 is that one cousin who brings all the fixings and wittier table talk.

It’s the type of family member you wish would show up more than once a year.