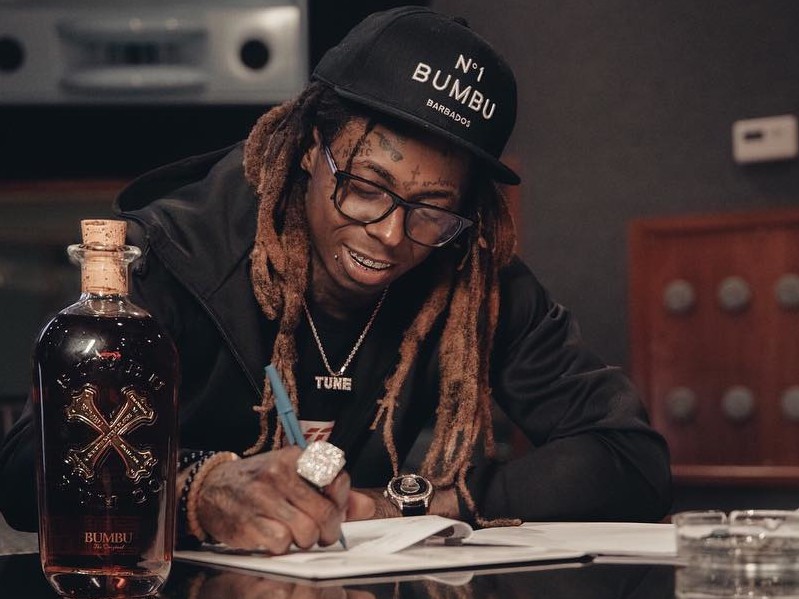 Simply put, Lil Wayne has one of the most captivating mic presences of all time.

His wildly weird quips helped rocket him to out-of-this-world popularity in the 2000s, and his latest mixtape, Dedication 6, proves we still don’t know what the hell is going to come out of his mouth. In honor of his impassioned return to form, here are the 10 zaniest Dedication 6 lyrics.

They have thot machines now? Man, Vegas never stops growing. I guess they’re right next to the Poke Her tables, which are adjacent to the crackjack games.

It seems that Wayne is one of many rappers who can’t wait until the paint dries on his luxury vehicle before taking it for a spin. More importantly, it’s apparent that his “glazy” woman was made by Krispy Kreme.

8. “Got a hot girl off television/With her berry sticky, unhairy kitty, in the right position/Screaming you’re consistent’/I sit there and listen like we talking business.” — “Menace 2 Society”

We find our hero with a TV celebrity. Even though she’s quite, erm, sticky, that’s OK because she’s balder than Dick Vitale and has a knack for being in the right place at the right time. While a more commonly-used sex phrase is “Oh (insert person’s name here),” it’s Weezy’s consistent approach to coitus that this girl finds so intoxicating. It’s just another day at the office for Tunechi, who conducts business like Don Draper at an ad pitch.

This is actually fairly clever wordplay. Wayne is snorting cocaine with a beautiful black female before they Marvin Gaye get it on. But the image of him laying the pipe on a zebra in the African Savanna all Lion King-style is something you can’t unsee.

6. “Ride me so good I need horseshoes/Eat that shit out like some soul food.” — “Suwu”

Dave Chappelle wasn’t wrong: Lil Wayne loves lady parts. Even though Chappelle himself finds them to be an “acquired taste,” Weezy Baby gobbles up the pink like it’s Roscoe’s Chicken and Waffles. As Chappelle said, “Only Lil Wayne would say some shit like that.” For some reason, Wayne needs to wear horseshoes to survive the endeavor, which either means the sex is just that vigorous, or they’re doing it at the Belmont Stakes.

Listen, all geniuses have unique methods to their madness. Thomas Edison would go fishing with no bait just so he could sit alone and think. So who are we to judge Weezy for needing to ejaculate so he can come up with his greatest, most innovative ideas? Albert Einstein would be proud.

4. I’ve been talking shit up in Diddy house/Went to Disneyland talked to Mickey Mouse/Then I figured out how to figure out, what I was figuring out/You figure it out.” — “Menace 2 Society”

Have you ever truly struggled to figure out how to figure out what you were figuring out? Sometimes the answers to life’s questions can be easier than we think. You just have to ring Puffy’s doorbell and get some life advice, and then head to Magic Kingdom for a second opinion. And to think, we’ve been pondering the meaning of life this whole time! Go figure.

Wayne takes time out of this spastic intro to let listeners know that if they brush up against his pants, they may get electrocuted. Can you imagine if Wayne’s member was used for capital punishment? Judge: “Your crime is horrific, and you cannot be rehabilitated. I sentence you to Dwayne Carter’s penis.”

In the ‘90s, most everybody, man or woman, boy or girl, wanted to be like Mike. But who knew that all you needed to emulate Michael Jordan was a face in your vagina and a thumb in your butt? Now that Weezy dropped this gem on us, the game of basketball will never be the same.

Say what you want about Lil Wayne, but he is a man who sticks to his principles, damn it. How you gonna wear Yeezys if you don’t believe in Kanye? HOW SWAY?

And on top of that, the woman in question clearly can’t be trusted, as she doesn’t swallow his love juice. I wonder if Honest Abe Lincoln… you know what, nevermind.