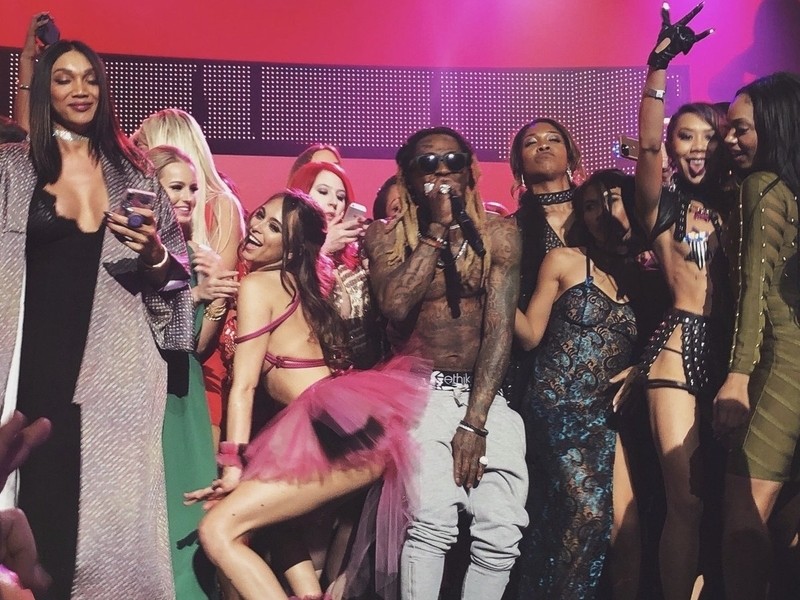 “I died and went to heaven,” Wayne said while adult film stars took photos with him.

Watch the performance above.

(The original version of this article was published on December 19, 2017 and can found below.)

Come January 27, 2018, while most of the world is in Grammy mode, Lil Wayne will be front and center at the so-called “sexiest awards show of the year” a.k.a. the AVN Awards.

The soon-to-be 34-year-old event will commence at The Joint inside the Hard Rock Hotel & Casino Las Vegas.

“We are extremely pleased to have Lil Wayne performing at the 2018 AVN Awards,” AVN president Tony Rios said in a statement. “Like many of the talent within the adult industry, he is also a successful entrepreneur having opened his own company Young Money Records. He’s an amazing addition to this year’s show and we look forward to having him.”

Lil Wayne added, “This is one of those bucket list moments for me. I’m super stoked to be a part of the awards show this year.”

The performance will be one of the first big events where Weezy will get the opportunity to showcase material from Dedication 6, which drops Christmas Day.

Fans of either industry who aren’t close to the Vegas area will be able to stream in, as the show is part of the AVN Adult Entertainment Expo presented by MyFreeCams, scheduled January 24-27 at the iconic Vegas venue.

Adult superstars Angela White and Harli Lotts are scheduled to host the event as well.

For ticket accommodations, check out the official Eventbrite.