Review: “Bright: The Album” Is A 13-Track Stab At Earning A Best Original Song Oscar 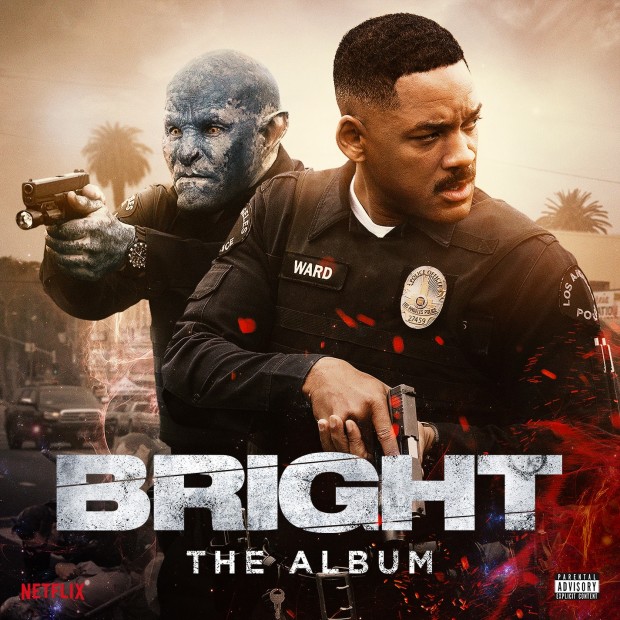 The soundtrack to Bright, Will Smith’s Netflix blockbuster hopeful, attempts to articulate the weird, gritty netherworld of the film, an upside-down Los Angeles, where humans coexist with mythical creatures.

Featuring “top-of-the-bill” Hip Hop acts like Migos, Future, Lil Uzi Vert, Logic, Meek Mill, Ty Dolla $ign, YG and Snoop Dogg, the 43-minute album succeeds in contextualizing the movie and is oddly satisfying for the most part, save for a few missteps that feel contrived and middling.

Yet, to fully conjure Bright: The Album’s apocalyptic landscape, these rappers are paired with established and emerging pop, EDM and indie rock acts. Take the Logic and Rag’n’Bone Man cut, “Broken People” for example. As the album’s opener, it’s the tone-setter for this filmic universe in that it’s haunting and urgent. Ultimately, it compels thanks to Logic’s always proficient raps and Rag’n’Bone Man’s pleading chorus – desolate beauty.

Migos and dance producer Marshmello team up for the sinister “Danger,” which is big-budget trap muzik that is dense, moody and elegant. And it works. Another standout is the Lil Uzi Vert/Steve Aoki track, “Smoke My Dope,” not to be confused with the Lil Pump song. This jagged tune finds the hyperkinetic, Philly rapper at home on Aoki’s bleak, electro thump where a disembodied vocal sample — a repeated off-kilter chant of the song title – hovers above this delightful mess.

Meek Mill, YG and Snoop Dogg’s “That’s My Nigga” is propelled by the iconic “Still D.R.E.” sample, but this isn’t a mere copy-paste. The riff is interpolated as trap, and YG and Meek Mill enliven the proceedings while Snoop offers that touch of “Old West” nostalgia.

The soundtrack’s ambition does cause lapses along the way, however. There’s the glossy yet overproduced “Home,” which features Machine Gun Kelly, X Ambassadors, and Bebe Rexha. Is it pleasing to the ear? Yes. Does it have the feel of a movie-trailer song? Absolutely. But it also suffers from sounding indistinct and, ultimately, a calculated play for pop radio. The same could also be said for the listless “Crown” by Camila Cabello and Grey – the flat earth on a sonic journey intended to be chaotic and unpredictable. Additionally, A$AP Rocky and guitar hero Tom Morello’s steely “FTW (Fuck the World)” grates and provokes but feels incomplete with its microwave dinner two-minute and 23 second run time.

Overall, Bright: The Album won’t convert rap fans to rock and vice versa but it is a refreshingly weird and gritty romp that seduces the listener. And its oddest collab on the album, “CampFire” with DRAM and rock icon Neil Young may just demand an EP pairing down the line.