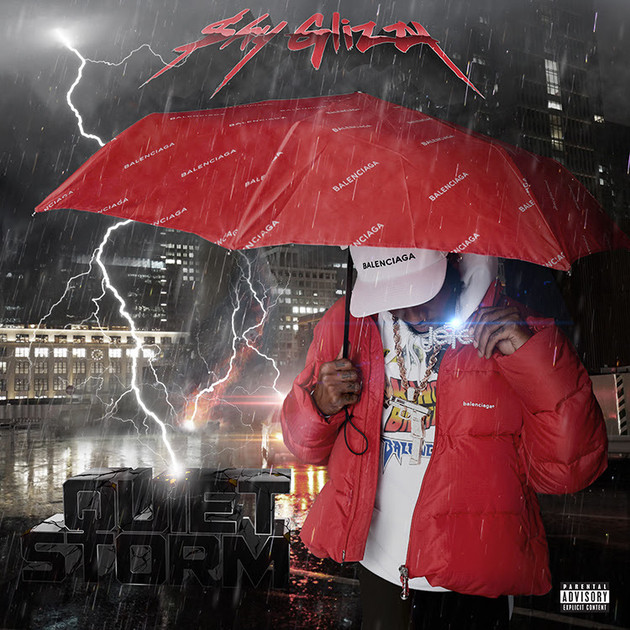 A couple of weeks after receiving a Grammy nomination for his role in Goldlink’s eternally fresh record, “Crew,” Washington D.C rapper Shy Glizzy is back with the lengthy mixtape, Quiet Storm. Shy Glizzy kicked off the year by releasing The World Is Yours, a lukewarm EP in which he adopted the moniker Young Jefe. Since 2011, he has been consistent and relentless, releasing at least a couple of mixtapes a year that range from forward-thinking to mostly forgettable. On Quiet Storm, the rapper builds off the strengths of his 2016 mixtape Young Jefe 2 and establishes himself as one of the unique vocal presences out there. Though Shy Glizzy still lacks lyrical originality and curation, his cutting hooks and distinct flow continue to set him apart.

Quiet Storm stretches over one hour, closing out with the hit “Take Me Away.” The mixtape demonstrates both his hunger for success and an earned sense of accomplishment. On “Make It Out,” he raps, “I used to think that Bentley was a lot until I drive it , I used to think a million was a lot until I got it.” Even though Quiet Storm is packed with different iterations of this boast, Shy Glizzy’s delivery manages to keep it interesting. The title track showcases the D.C rapper’s principal strength — an unconventional flow. Over a slow, moody beat, his chorus lures you in, hypnotizing you with the equally ominous and braggadocious hook: “It’s a storm coming, it’s a storm coming.” On the tracks “Get Jiggy,” “More Clips,” “Keep It Goin,” and “Blow A Bag,” Shy Glizzy explores a more party-oriented vibe with a lighter delivery accompanied by breezier, catchy rhythms. While on “Get Away” and “Make It Out,” his flow is preachy and declarative, giving his cocky rhymes a renewed urgency.

Shy Glizzy is served by minimal production that strategically puts his distinct vocals at the forefront of each song. As usual, his most trusted collaborator in Zaytoven has lent him the space to expand on his innate melodic flexibility. But Quiet Storm also features a couple of underwhelming performances by a handful of guests. “Dope Boy Magic” with its rainy day production, shows Trey Songz and New York City stunt prince A Boogie with da Hoodie struggling to match Shy Glizzy’s bravado. This problem is echoed on “Paper Soldiers” in which fellow D.C rappers Goo Glizzy and DF Gizzle fail to keep up with the main act.

Glizzy clearly is eager and hungry to continue to impress. So it’s understandable Quiet Storm is longer than most Netflix shows. Towards the second half of the eighteen track mixtape, however, the momentum slows as songs become redundant. Ultimately, this excess exposes melodic formulas, recycled tropes, and a lack of self-editing. Yet the mixtape’s last track “Take Me Away” is calm and yet infectious, suggesting that with just a little more restraint, Shy Glizzy can truly reach his full potential as an artist.