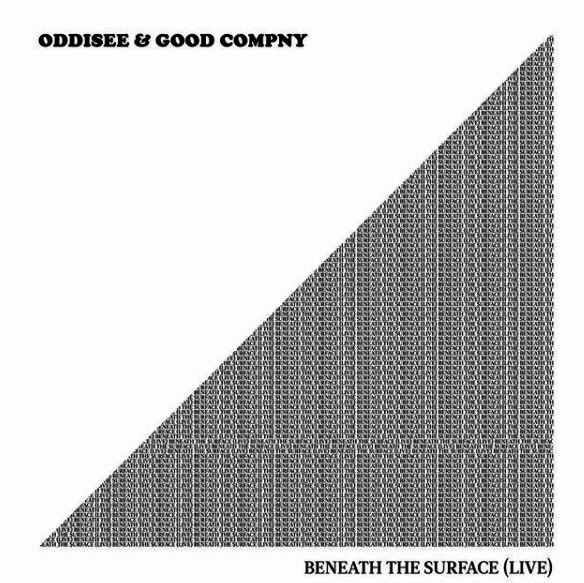 The stage is set. The sound of melodic horns quickly usher in the drums to thunderous applause and anticipatory screams. Oddisee’s voice comes on over the monitors as his five-piece band Good Compny helps command the audience. Almost instantly, everyone is immersed in “Digging Deep,” the album opener for his latest studio album, The Iceberg, released in February.

The song also happens to kick off his new (and first) live project with Good Compny, Beneath The Surface. The 12-track effort explodes with an undeniable electric energy that continues throughout the album, especially on standout tracks like “Things” and “Like Really.”

After playing 110 international shows together over the last several months in support of The Iceberg, their ship is tightly run. The collection of songs found on Beneath The Surface — including “Lifting Shadows” and “Strength and Weakness” from 2016’s Alwasta EP, and “That’s Love” from 2015’s The Good Fight and “You Know Who You Are” from 2012’s People Hear What They See — were recorded in the span of two months. Oddisee symbiotically banters with the crowd the entire time — he feeds off his fans’ vibe as much as they do his.

He continues interacting with the audience for the duration of the roughly 50-minute project and routinely lets the crowd finish some of his lyrics. Oddisee’s fans are clearly a loyal bunch and their admiration for the gifted MC rings loudly as they sing along.

On every song, it’s easy to imagine the lanky D.C. rapper standing on stage and pouring his heart out about issues he feels passionately about. With every breath and every syllable, the conviction in his voice makes the Diamond District MC’s music all the more impactful. After all, Oddisee is an aberration to the Hip Hop that primarily populates the mainstream. His astute attention to crafting intelligent lyrical content and saying things that intimately resonate with his listeners are the cornerstones of his career.

Whether he’s tackling the political landscape with lines like, “How you gonna make us great/ When we were never really that amazing” on “Like Really” or exploring important personal relationships on “That’s Love” with bars like, “When you told me the truth, even if it really hurt/ Cause you knew a lie was worse (That’s love),” he raps with a certain level of cleverness that may not echo with everyone. But for those willing to dig deeper beneath the surface (as the title suggests), there’s a seemingly endless amount of lyrical gems waiting to be discovered.

Oddisee’s intensity especially picks up on songs like “Lifting Shadows” and a seven-minute rendition of “NNGE (Never Not Getting Enough),” which he refers to as “go-go music.” As the song builds, he explains it’s intended to put the crowd “in the pocket,” meaning “in the groove,” something he effortlessly accomplishes as the crowd chants, “Never Not Getting Enough.” Finally, “Rights and Wrongs” featuring band member Olivier St. Louis, is another album highlight that channels Parliament-Funkadelic with its funky bassline and booming, soulful chorus.

Beneath The Surface‘s only drawback is that it’s too close to The Iceberg. Eight of the 12 songs are from the Mello Music Group February release, so it’s almost like listening to the same album all over again (albeit a strong effort). But overall, paired with the live exchanges with the crowd and emphasis on the band’s musical prowess, Oddisee nails his inaugural live album and is, indeed, always in good company.