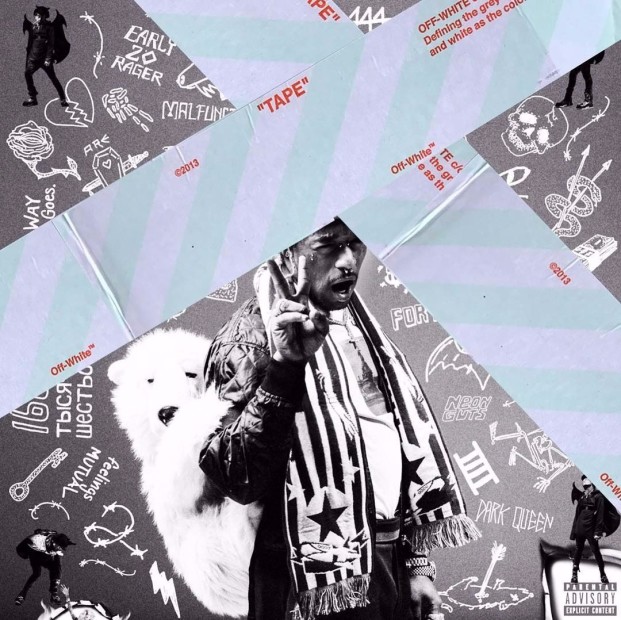 Many of today’s younger Hip Hop fans seem to care more about the entertainment factor of music — the feel, production and melody — than about lyricism, and Lil Uzi Vert’s Luv Is Rage 2 crystalizes this sentiment. The album finds him almost completely ignoring traditional lyricism in favor of warbling emotion, with the result being a sometimes-messy affair that nevertheless maintains a colorful vibe.

It’s easy to laugh at Uzi’s claim of being “one of the greatest to ever do it” on “Sauce It Up.” Especially since the opening tracks “Two” and “444+222” are almost cringe-worthy. The former is marred by half-spoken word, half-vocoder rhyming that lacks the melodic touch Uzi usually possesses. The latter repeats the same seven phrases throughout the song to an exhausting effect.

These first two cuts endanger the album of falling far short of fans’ expectations following the enormous hit that was “XO Tour Llif3.” But Uzi mirrors the single’s ghostly charm on “Sauce It Up,” and never looks back throughout the rest of Luv Is Rage 2. The lyrics are hard to understand without cueing up Genius, though he plays with his voice and syncs it with simple but catchy basslines to create a feeling that is part-wistful, part-turnt up.

Songs like “Sauce It Up” and “Pretty Mami” ooze a feel-good sentiment that peppers the album with charm and makes it worthy of mindless but endearing background music. Considering that Uzi is soundtracking parties, smoke sessions and possibly even late-night study sessions, he hits the bullseye of the college-bar dartboard.

Uzi’s target atmosphere wouldn’t be reached, of course, without strong production. He enlists the likes of Don Cannon and Metro Boomin to combine trap drums and subdued piano keys for a cohesive feel that dispels the notion that he doesn’t have a vision.

Pharrell’s colorful “Neon Guts” is a highlight, and once again allows Skateboard P to flex his remarkable versatility. The Weeknd also enhances the album’s sound on “UnFazed.” His ethereal vocals and the song’s electro sensation mainlines technicolor into the listener’s veins. The production is sometimes so similar that the songs tend to run together, but there are enough standouts to keep Luv Is Rage 2 engaging as a whole.

When Uzi’s lyrics are discernible — which happens more often than his critics might think — it is glaring how lacking he is with a pen. “I fuck that girl like a prostitute (yeah)/I cannot lie girl, I bother you (that Uzi).”

But unsurprisingly, he shines on hooks. “For Real” features one that burrows into the brain and refuses to leave, while the chorus on “The Way Life Goes” displays relatability beyond teenagers and weekend warriors: “I know you’re sad and tired/ You’ve got nothing left to give/ You’ll find another life to live/ I know that you’ll get over it,” he sing-raps in a soothing tone. This song — strong enough that apparently Nicki Minaj is aching to be on the remix — and the reflective “Dark Queen” are proof that this kid has depth to him, and spruces up an album that is redundant in its braggadocious party themes.

The aforementioned “XO Tour Llif3” closes the album, and impressively manages to make “all my friends are dead” a catchy refrain.

Lil Uzi Vert will never be in the conversation of “greatest to ever do it” … at least according to the older generation. He’ll continue to piss off old heads and delight young fans. And somewhere in the middle, the truth lies that he’s neither the next great thing, nor a menace to the culture. Luv Is Rage 2 is proof that Lil Uzi Vert is simply an artist who succeeds in makes music he loves, for people that hold tightly to his carpe-diem attitude.