Review: Tyler, The Creator Finally Makes An Album You Don't Have To Defend With "Flower Boy" 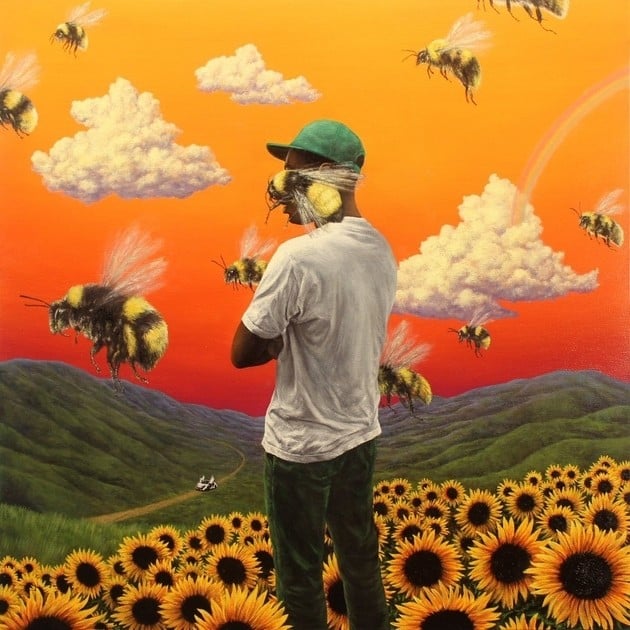 Routinely using the internet to make his presence felt, nearly a year ago Tyler, The Creator sent shockwaves through Twitter as he laid his infamous “@fucktyler” handle to rest. He claimed the move was for professional purposes, but it was the culmination of a gradual maturity and development to take place as he’s become a multimedia staple over the course of seven years. Dropping albums every other year like clockwork, the rollout for (Scum Fuck) Flower Boy was met with certain skepticism as 2015’s Cherry Bomb was his most polarizing release to date.

Lead single “Who Dat Boy” stuck to Tyler’s formulaic strategy of throwing a curveball that caters to day one fans, all the while giving no indication of his latest work’s vision. Mindless in nature, here he teams up with his fashionista BFF (and tour road mate) A$AP Rocky for a raucous jam that sounds like the score to a horror film. Given the pair’s stylistic polar oppositions, bridging their dichotomy makes sense as it ensures their fan bases overlap. But a curveball it was. Having long overcome the anxiety and pressures of playing the underdog, with Flower Boy, Tyler, The Creator is no less determined to garner respect as a musical visionary. It can be argued that happiness is not only a contributing factor but also the album’s running theme, as the title plays off of a metaphor for seeds planted during Odd Future’s humble beginnings. The vision is a complete 180° from the dark energy that defined his earliest recordings; see “Foreword” for example, which uses a string section to set the pace for an LP that undoes the disappointment from the last project.

With the album leaking early to the delight of consumers obsessed with meaningless tabloid fodder, speculation quickly spread that Tyler used Flower Boy to announce his sexual preference (contradictory to the slurs he’s toyed with in the past). The brief interlude “Sometimes” features a reserved male requesting to hear the subsequent “See You Again” on the radio, as he alludes to secretly being the subject of the pianist’s fantasies revealed therein. Advancing his sound here while picking up where his prior 2013 pinnacle Wolf left off, lush keys and handclaps stand out as Kali Uchis (a key figure in Tyler’s arsenal) sonically envisions the perfect partner.

Let the rumor mill tell it, Flower Boy is a revelatory body of work where Tyler claims LGBT ties by way of the dreamy “Garden Shed.” Serving as one of his most powerful recorded moments to date, psychedelic guitar licks and synths build up a ballad featuring Estelle vocals, as liberation is encouraged before noisy feedback makes way for a confessional verse. A complete surprise if true, here the usually expressive musician works through confused emotions that he claims to have kept hidden from the world at large. Leaving enough vague gray area to keep people wondering, it stands to reason the song is conceptual shtick given Tyler has acted out roles including degenerate criminal, deranged school shooter, and drug dealer on wax before. Also, with The Internet’s Steve Lacy arriving to be latest virtuoso Odd Future Kinsey Scale blender (alongside bandmate Syd The Kid and the Frank Ocean), the crew’s most visible member could be simply taking a unified stance in their honor. Nonetheless, “Garden Shed” gives a brave voice to what’s now potentially four young adults (not to mention countless listeners) who shouldn’t be forced to fight against same sex attraction in a close-minded world. Much ado has been made about the rousing “I Ain’t Got Time” where Tyler states, “I’ve been kissing white boys since 2004,” but it should be noted he’s long worshipped Eminem’s comedic knack for making outlandish statements.

“Mr. Lonely” is perhaps the first time he’s explained his attention-seeking antics and car fetish both stem from inner emptiness, a rationalization reiterated on “Boredom.” Arguably the album’s highlight (and an homage to N.E.R.D.’s knack for drum crescendos), with the help of pretty chords provided by songstress Corinne Bailey Rae and others, he explores the gift and curse of being a genius who’s neither impressed nor inspired by old habits and friends. Likewise, “Pothole” is a goodbye letter to former day ones as Tyler tackles unspecified incidents that could include Hodgy Beats’ untoward 2015 outburst regarding changes in their clique’s dynamic.

Clocking in at 47 minutes, the album is both Tyler, The Creator’s shortest and most cohesive album to date and is full of introspective admissions that logically line up with his public character. Having studied Pharrell’s expertise for creating melodies from thin air with little to no sampling, his compositional brilliance has propelled him to the status of a societal icon, evidenced by the mission statement: “Tell these black kids they can be who they are” on “Where This Flower Blooms.” Though he’s caught up in the trappings of materialism like the common superstar rapper, Tyler is quite underrated as an MC despite the fact that his production tends to overpower him at times. Now that he’s back on track melodically, it’s time to revel in his newfound artistry.