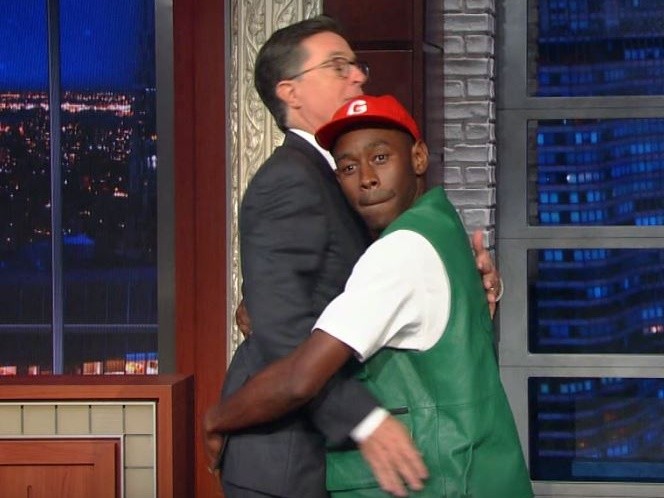 New York, NY – A pantless Tyler The Creator appeared on The Late Show With Stephen Colbert this week to discuss a myriad of topics, including his appreciation for Elizabeth Taylor and his newly released album, Flower Boy.

In regards to Flower Boy, which serves as Tyler’s fourth solo studio album, the Ladera Heights, California rhymer says he produced and wrote about 90 percent of the project. He also revealed why he didn’t want to rap a lot on the album.

“A lot of people are like ‘Oh, what’s going on here?’ I produced and wrote mostly 90 percent of it,” Tyler said during his appearance on the talk show. “It’s a few melodies that I didn’t come up with … It’s more so that I just wanted to produce and have people sing. And that’s all I want to listen to. So, I kinda didn’t want to rap a lot on it. So I kept all my rap verses short. And everything I said, I made sure it was really ridiculously important. And I think that’s what people kinda like about it this time around. ‘Cause it’s nothing funny on it.”

“Elizabeth Taylor is my jewelry idol … I found a book one day, lurking in Barnes & Noble. And was like ‘Oh my God, this little white lady got some nice stuff.’ And called it a day,” he said.

After his interview with Colbert, Tyler hit the stage to perform his Flower Boy single, “911.”