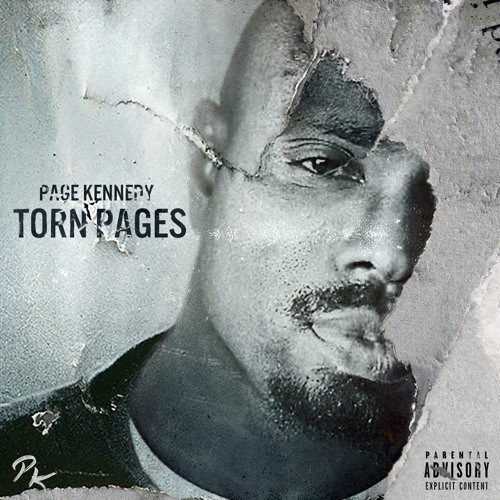 Page Kennedy has had an interesting and fruitful career arc over the years. From reoccurring characters in Emmy Award-winning shows like Weeds and Desperate Housewives, roles in movies such as S.W.A.T. and Leprechaun: Back 2 tha Hood to social media success with Vine and YouTube: Page has in nearly every form of media and entertainment. Now it’s time for music. The Detroit native makes his foray into rap with his debut album, Torn Pages. Despite an earnest effort, there isn’t a consistent theme throughout the album which ultimately reveals itself to be a collection of random tracks.

The LP opens with “Reintroduction” as Page takes this time to introduce the listener to him as a rapper. Over a militant production, Page uses the intro as his origin story with rapid-fire precision (“That’s right I’m a shitty rapper because I don’t talk about poppin’, turnin’ up, or fuckin’ models,” he quips).

That message of what he doesn’t do in his music, however, becomes muddled by the time you get to the Kuniva of D12-assisted “W.C.W.” Standing for Woman Crush Wednesday, “W.C.W.” is three minutes of clumsy punchlines, body-shaming and slut-shaming rhetoric over triumphant horns seasoned across a jazzy melody. Lines like “Hot chicks get likes ‘cause they got tits” and “She could be Magic and wouldn’t be Worthy” exemplifies exactly what Black women have been saying about their mistreatment at the hands of Black men for decades.

More missed moments are had on “Haters Be Like”. Page channels his inner-Eminem and does his best Reed Richards impression with bars like “Could give a Vancouver lesbian that pipe, that’s right I give Dick to a Van Dyke” and “Money and yoga pants, gotta make it stretch.” On the lyrical onslaught of “Testing Me”, King Los and Royce Da 5’9” tackle the dark, brooding production in the manner that earned them their battle medallions but Page seems to force bars like “Not for nothin’ but Keepin’ Up with the Kardashians will get ya ass shot, see the correlation between Kardashian and ass shot?” In an even more puzzling move, the song randomly fades out with no lyrical clues as to why as Page raps.

Torn Pages does have its redeeming qualities, however. “Therapy” is a sobering look into the life of a struggling Black man in America feeling the pressure of today’s society and trying to be the best man he can be. Melancholic keys and eerie drums serve as the background as the track takes an interesting look as Page tells his story to a psychiatrist, perhaps tackling the angle of mental health in the Black community. On “Renee” also shows Page at his best as he details the struggles of his relationship with his mom. The record tackles a topic that we don’t see broached in Hip Hop too often — or at all. We’re all way too familiar with the deadbeat dad trope but rarely do we ever get a glimpse of an absentee mother from the child’s point of view. If you can push past the painfully remedial hook, there’s a story here that is really worth your time. Kennedy’s spin on life “Growing Up in the D” takes us through a journey of his life in Detroit with a perfectly placed Eminem vocal from “Amityville” as the top line of the beat.

While the current cultural norm shows us fabrication is the motto, Page Kennedy gave us his life in Torn Pages. The depth it shows, at times, is remarkable and Page’s command of his voice is stellar. But while it’s clear Page has the technical and lyrical ability to make a mark in Hip Hop, Torn Pages does suffer from a lack of expert executive producing. Too many times the listener is given a very potent bar, immediately followed by a forced punchline. It sets the stage for an even better effort virtually by default.