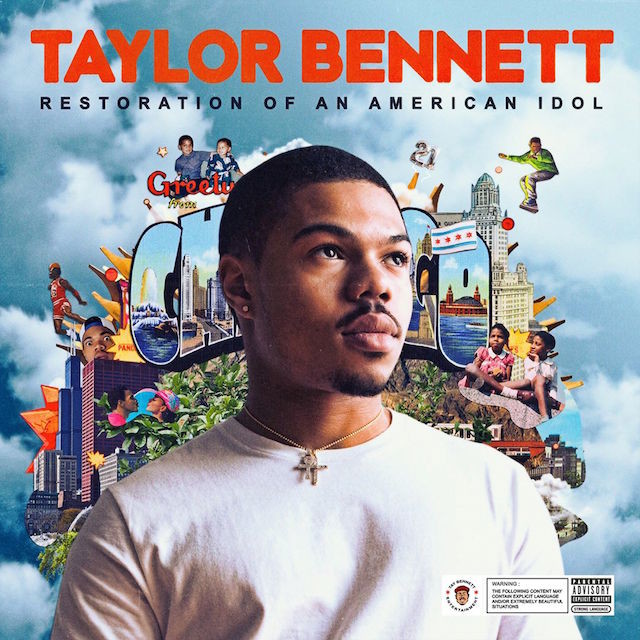 What can’t the Bennett family do? Patriarch Ken Williams-Bennett has had a successful career navigating Chicago’s tumultuous political scene. His oldest son, Chancellor turned a 10-day suspension into a Hip Hop career that has earned him three GRAMMYs (and counting). And then there’s Taylor.

An up-and-coming MC with a similar passion for his hometown, Taylor Bennet has returned with his second album, a follow-up to 2015’s positive effort Broad Shoulders. The new work, Restoration Of An American Idol, is a nine-track project featuring a Jeremih, Raury, Lil Yachty and more, showcases an artist working – and slowly succeeding – at moving out of his brother’s shadow.

“I had to show him that I’m not LeBron/Can’t vote for no future that’s frivolous/My shoulders got broader, my music got smarter/I work like this shit is a privilege,” he raps on “Intro,” summing up what many are thinking: Taylor Bennett is only famous thanks to Chance. While it’s undeniably true, it’s a statement that doesn’t give credit to a talented musician.

Restoration Of An American Idol, as Bennett claims on his SoundCloud page, is his best work yet. Unlike Coloring Book, which was a mix of highs and melodic lows, the record keeps an even keel throughout thanks to a mellow mood befitting of a mid-winter launch. Slower, wavy tracks like “Roof Gone” – a slow jam dedicating to blunt rides and girls – and “Play My Part” – another track focused on the women in his life – set the scene, allowing Taylor to flow across light piano notes, trap drums and electronic that give him space to navigate lyrically and prove his worth.

“I need them VMA’s it’s in my DNA/I ain’t no deity but I still contemplate / Complicate, conversate, me on that BET/MTV, what that shit meant for me,” raps Bennett on “Favorite Colors”, his brother weighing heavily on his mind, his career and the track. Luckily, both stress and competition tend to breed success.

Unexpectedly Chance gets his feature spot on “Grown Up Fairy Tales” – bringing Jeremih with him for added star power – but Bennett stands out best when working alongside artists who lyrically ball at his level, including Kyle (“Favorite Colors”) and Lil Yachty (“Neon Lights”). The latter is one of the album’s more upbeat tracks, with a lighthearted feel that clicks; unfortunately, the other attempt at adding summertime flare to the winter – the “Get Lucky”-inspired, EDM-infused “New York Nights” – falls flat.

Taylor is still experimenting, and at just 21-years-old, that’s OK. Resisting the urge to follow trends and focusing on his wordplay is another step in the right direction, even if he’s a way off from turning those steps to a sprint.