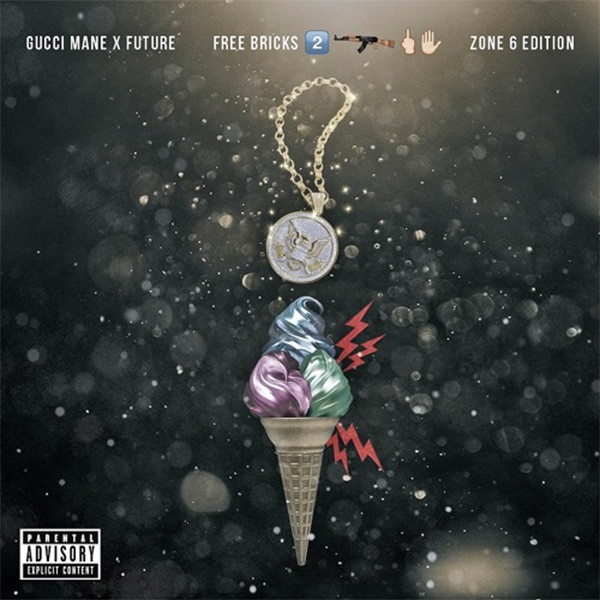 Prior to this week, despite having released two solid LPs back to back and working with a slew of old friends and new acquaintances alike, Gucci Mane still hadn’t worked with Future — one of his earliest co-signs this decade. It was curious, to say the least. However, Monday night, almost a week after predicting the Southernplayalistic greatness of his upcoming East Atlanta Santa, against a backdrop of a crimson supermoon, the duo unexpectedly unleashed Free Bricks 2: Zone 6 Edition (not to be confused with Gucci & Young Scooter’s Free Bricks 2, which the former seems to have stricken from his memory). Turns out, these two know a bit more about timing than the regular civilian.

Convenient amnesia aside, FB2: Z6E also comes on the heels of Gucci’s Rae Sremmurd collaboration, “Black Beatles,” (you may know it simply as the “Mannequin Challenge”) becoming the #1 song in America. It’s been a good, albeit uncharacteristically formal, year for Gucci — so it only makes sense that he feels the need to prove he still has a few tricks up his sleeve. According to Guwop, FB2: Z6E’s six tracks were all recorded in one session Sunday night, less than 24 hrs before he dropped it on SoundCloud. The appeal of this quick turnaround was best explained by the man himself: “There was like this positive competition in the room. I’d hear him go in on a verse, and I knew I had to step up…Even Future didn’t think we were dropping this tonight. This is the freshest it can get. These joints ain’t even 24 hours old. That’s like bringing you in the studio with us,” he stated.

Therein lies the magic as well as a missed opportunity. While his bat signal seemingly awakened the relatively dormant Super Future (who’s as ruthless as he is infectiously melodic on here) it fails to take full advantage of his powers. Don’t be mistaken, this is the best both rappers have sounded all year, and these uninhibited anthems feel restorative on a visceral level. They just also feel a bit incomplete. Take the closing “Zone 6” anthem for example — it’s trademark old school Gucci and a frighteningly empowered Future boasting their “five fingers with the fuck you” mentality, but the mix is all over the place. The song levels fluctuate at whim and the bass overwhelms Zaytoven’s subtle keys. In a sense, this a return to the on the fly work ethic this trio made their name on, but it feels like an unnecessary gimmick at this stage in their careers.

However, if this is what it takes for Gucci to combine his newfound penchant for writing and structuring verses with the freestyled charisma he used to be hailed for, then it’s a fair tradeoff. On a majority of these tracks, Gucci is picture perfect pay-per-view (even if you still don’t get the picture), weaving together humorous wit and unsettling insight with ease. “Kinda Dope” sees him as a perceptive young dealer, bumping UGK’s “Pocket Full of Stones” ruminating on his surroundings: “it’s something on your back, baby it look like a monkey/she can’t shake it off man, she keep spendin’ money.” (“Kinda Dope” also sees Gucci delivering a great hook – something that has seemed to elude him on his past two projects). On “Selling Heroin,” over a lively Southside beat that features pitch-shifted wails from Future, he proclaims, “this ain’t a gimmick, it’s an epidemic,” and sounds downright sad when he sings, “she can’t even find a vein to catch a drain.” He then proceeds to rhyme “find a vein” and “catch a drain” with “hijack a plane to get the ‘cain.”

Future is rarely as poignant as his mentor on here, opting instead to bring back the weirdness to his melodies in the best way possible. He delivers a slew of great hooks and strings the listener along with every unconventional verse (seriously, this is the most awake Future has sounded all year). He plays with his well known “Jumpman” flow on “Zone 6,” nasally declares that he’s spreading his wings on “Die a Gangsta,” and provides the Yang to Gucci’s relative Yin on “Selling Heroin.” After a few listens, it’s hard not to be mesmerized by the raw, unfiltered chemistry; the presence of a wild card Streetz Calling/True Story-era Future allows Gucci to use this project as a sort of back-to-basics.

On FB2: Z6E, with the help of Future, Gucci allows himself to be a “trap astronaut” who uses “cocaine for fuel” once again (and he’s quick to remind you: “if you don’t know the old me, you don’t really know me”). The results are satisfactory, even if the final product feel rushed.