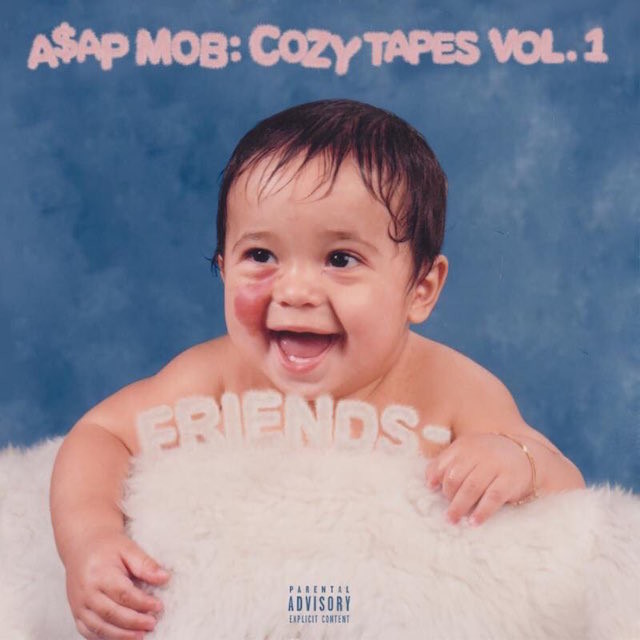 In a March 2015 interview with now business partner MTV, pretty muthafucka and jack-of-all-trades A$AP Rocky informed the network that we, the Hip Hop community, couldn’t “describe” him. Questioning “What is New York music right now? What does it sound like?,” he staked claim on numerous Hip Hop hotbeds. He staked claim on the world. The same jiggy Harlem cat that floated onto the scene on some spacey screw shit reminded us that he (and his boys to boot) were wild cards. Enigmatic at times, the mob wields an eclectic creative compass that points them into the booth, onto runways, and across silver screens. And amidst mourning a mastermind, Rocky’s righted the ship, comfortably charting Harlem World’s current kings through waters deeper than ever before.

Envisioned by the late Yamborghini and inherited by Rocky, Cozy Tapes Vol. 1: Friends strives to create a sense of hyperreality for listeners, pitting its buzzworthy host of guest spots across skits and sonic palettes that accentuate their respective styles and textures. And while Rocky is still the undeniable center of attention (he appears on eight of the project’s 12 tracks), his presence, versatility, and overwhelming camaraderie with his counterparts allow for seamless transitions from one voice to the next. As opposed to opting for his own isolation in the spotlight, Flacko’s give-and-go mentality on tracks like “Crazy Brazy” and “Way Hii” showcase authentic shades of fellowship, especially on the latter where he and Wiz weave together bars detailing their intoxicated pursuit of the opposite sex.

That sense of reckless brotherhood saturates itself throughout the project, but Rocky’s role as the stoned backseat driver on tracks is an experience short-lived. One track removed from A$AP Nast’s 90s nostalgia “Nasty’s World,” Jodeye prompts us to recall who’s really got the juice on the Harlem World anthem “Money Man,” gloating “I swear my shooters be my juniors,” and later on even telling Golf Wang god Tyler, The Creator to “step his flow up” on Plu20 Nash’s spacey “Telephone Calls.” For an artist that effectively settled into a burgeoning comfort zone on A.L.L.A., Rocky himself seems to have been peer pressured back to elevated, swag-rap fundamentals on this project, throwing experimentation out the hot box in exchange for slews of gaudy, hyperactive sets of bars that sprawl and often spill from one line to the next.

Even through the tape’s regimented, strategic manifestation of Harlem’s cultural epicenter, A$AP’s head man less successfully spreads the mob’s efforts outside their geographic location, attempting but somewhat stalling to spawn and scaffold sounds around that of other regions. Cuts like “Bachelor” and “Runner” seem less suited for this album than they would on projects created by their ATLien collaborators. Imports from Yachty, Offset, Lil Uzi Vert, and military brat MadeInTYO dutifully establish and solidify the buzz surrounding Atlanta’s current resurgence, but they also mark a momentary shift of focus away from Rocky and his crew. And while these tracks are glowing attributions to Rocky’s relevance and chameleonic skillset, his style appears much more suited for cuts like the Willie Hutch-sampling “Put That On My Set,” featuring grime tycoon Skepta, or the project’s standout track “London Town.”

The loss of spiritual leader A$AP Yams shrouds Cozy Tapes Vol. 1: Friends, so much so that the mob’s fallen comrade is featured on the album art. Once the genius, logistical general for the entire crew, Yamborghini’s posthumous presence pervades this project, with the tape accomplishing exactly what Yams would want — for each member of the crew to snuggly assert themselves and their talents into their appropriate lanes. Cozy prioritizes the gifts of its star much more than that of the mob’s other henchman, but its game plan ultimately proves triumphant. Bestowed with more responsibility and creative control than ever before, Rocky curates and entertains listeners, exercising self-analyzation, and implementing the usage the young talent outside of the mob’s immediate cypher. It’s in this sense that contributions from the likes of Ferg, Nast, Ant, and Twelvyy are somewhat devalued, but they’re necessary supports to a project that stands as a testament to Rocky’s current reign as a tastemaking ringleader.