Blu & Nottz - Titans In The Flesh 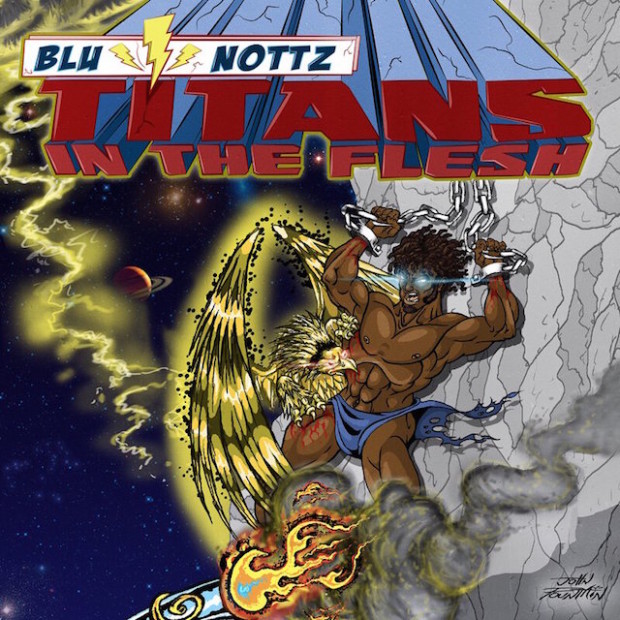 After a hiatus from their first collaboration God In The Spirits EP in 2013, Blu & Nottz’ bicoastal connection punctually returns in the midst of Hip Hop’s most coveted season. Their latest extended player, Titans In The Flesh is ambitious with melodic, bottom-heavy beats and adroit lyricism that moves with the unwavering speed and strength of Glory’s 54th Regiment. The Virginian beatsmith/MC continues his consistent track record of producing lean collaborative projects with credible lyricists. The duo convenes to intensively flesh out bombastic underground beats with soul chops, electronic stabs, and rhyme exercises that build stamina to endure the 8-track depth. Nottz brings his muscular production with Blu’s alliterative, esoteric wordplay showcasing b-boy bravado and a stark portrayal of society’s growing pains.

Blu exhibits his Cali underground influences and Christian rap rhetoric from the jump on “The Truth.” The bass drum marches-in, accompanied by a dissonant three-chord acoustic string loop. Shateish singing her gospel-rooted vocals makes the track ascend. The L.A. emcee’s two verses dually showcases his lyrical dexterity and details the project’s mission from his SoCal axis (“I swam under the ocean, found Atlantis in the poem/Left a rap book in Pomona that could take the planet over/Told a soldier if he finds it, I should take it home and rhyme it, and I did/New adventures of the gods and the titans”).

“Heaven on Earth” contributes a lengthy discourse on African-American reparations, COINTELPRO, abortion, among others. He also calls on listeners to “put your priorities in order before you are God’s ordered.” The track has Nottz’ signature funky keyboard slices. But the campy vocal sample is reminiscent of a 50s musical and sounds somewhat out of sync with the sonic boom created for the track’s oeuvre. The posse cut “Giant Steps”—featuring Bishop Lamont, Torae, and Skyzoo—lives up to the “titan” persona as each lyricist wrests the mic from each other deliver their 16. The broadway musical samples continue the path and introduce a new scene with more punchline power in the EP’s midpoint “To The East” with Blu, Definite, Tristate, Mickey Factz, and Johaz.

The intensity reaches the summit with mountainous bangers “The Man”—featuring Blu’s frequent collaborator Exile—and Nottz rhyming stellar bars. Blu initially gets ahead of himself when the track begins, then catches himself as the bass sledgehammers into his headphones in the recording booth and then proceeds to bedazzle his way onto the Biz Markie “Vapors”-like brass sirens that sound like The Rapture cometh upon us. “Atlantis” is the denouement with a hard snare and cymbals with a holiday festive carol-like singing that sounds like Christmas in July.

It’s been one crazy summer thus far. The daily news of mass shootings, global warming uptick across the planet currently in its ninth consecutive hottest year in history, as well as the U.S. presidential race and police brutality striking fear, political unrest, and division in the populace. People really need a break from reality. Blu & Nottz provide an emphatic respite from the ruckus.