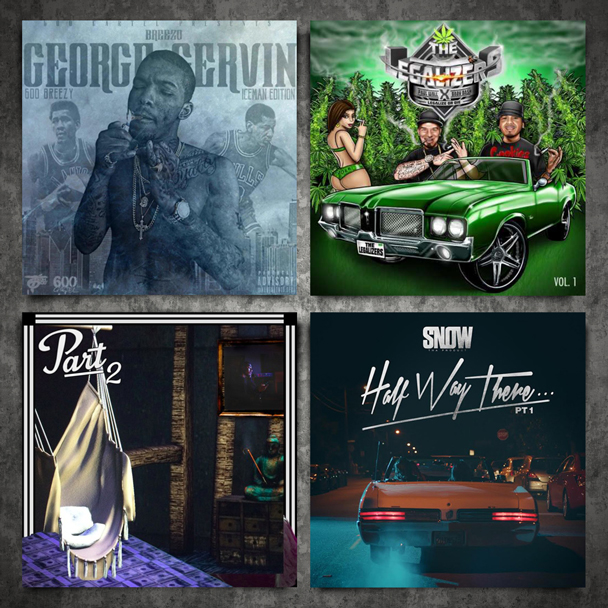 HipHopDX has reviewed over 120 albums in 2016. Even with that, there remain more than a few that we missed. Snow Tha Product, 600Breezy, Paul Wall & Baby Bash and Sir Michael Rocks released quality projects worthy of commentary. Our opinion is below. Share yours in the Community Section.

A minority on a number of levels, Snow Tha Product has womanhood, Mexican heritage and a lack of a big Hip Hop scene in San Jose all working against her. Without much of an identity to claim, Halfway There…Vol. 1 has Snow running in place trying to keep up rather than taking steps to truly stand out. Radio rotation replicas include the Drake-influenced “Alright” and a charged up Kanye West impersonation on “Get Down Low.” She’s technically good at the actual mechanics of rapping, but coasting in other people’s lanes to see what sticks ultimately gets her nowhere fast. 3.3 out of 5

Riding high on the drill wave popularized by Chief Keef, 600Breezy is sure to excite those trapped in Chicago’s street life along with voyeuristic onlookers. George Gervin: Ice Man Edition is full of terroristic if not intentionally demonic energy with little redeemable value in his tales of gang life, getting high, sipping lean, flossing and busting his gun. While “6ix Hunned” is exciting enough, if music is supposed to be 600Breezy’s way to a better life he needs to advance past songs that place you in a singular trance, unless of course that’s the point. Oh, and on the off chance you were wondering where OJ Da Juiceman has been, the tape has him appearing thrice, “aye” ad-libs and all. 2.8 out of 5

From the title, you can guess the topic Paul Wall & Baby Bash spend this collaborative album discussing. While they don’t hold a candle (or a lighter in this case) to Snoop Dogg & Wiz Khalifa—and I’m sure a modern day Redman & Method Man would be more entertaining—Legalize Or Die, Vol. 1 is a tad better than it reads on paper. Contrived moments like Future mockery “My Pack The Loudest” make for a few automatic skips, while the odd recollection “Smoke With Cypress Hill” works for Tribe stans given the vocal sample from “Push It Along.” There’s no rush to check out a sequel project, but this isn’t a completely horrible one-off. 3.2 out of 5

Since forced to figure out his path with The Cool Kids dismantling, Sir Michael Rocks hasn’t lost much steam going on to become one of the internet’s favorite heartthrobs. Populair Part 2 finds him having the time of his life going about as far outside of the box as he’s been to date. Refusing to take himself too serious, the turned up “How Are You So Calm” departs from flexing as he tells listeners “I worked at Zumiez in high school, I’m someone that you can relate to.” One of 2016’s most confounding moments comes via “Uno Baby Mami” where Michael spends the whole song doing an awkward Hispanic delivery akin to Drake’s Caribbean inflections that get much deserved flak. Possibly too creative for his own good at times, he’s sure to fit Troy Ave’s short-sighted “weirdo rapper” criteria for daring to go against the grain so heavily. 3.5 out of 5

After surprising fans with the unannounced project Inside The Vibe back in February, Cali duo Audio Push (Oktane and Price) have returned with their Interscope debut: The Stone Junction. A product of Hit Boy’s careful manicuring, Audio Push has turned heads since 2009’s “Teach Me How To Jerk,” but on 2015’s The Good Vibe Tribe the duo doubled down on the one-hit wonder pop-rap and opted for a dose of creativity. Audio Push’s new seven-song offering, which features Trae Tha Truth, Kap G, BMac The Queen and Jace, sees the group take a step backwards as they struggle to combine a series of big, bass-heavy beats (“BBQ Spot,” “Servin’,” and “Hard”) with their fun-loving message (Vibed Up Shawty) for a body of work that’s hard-hitting and concert ready. Ultimately, that might have been what their fans wanted in the first place. 2.5 out of 5

Grand Puba – Back from the Future

On Back from the Future, Brand Nubian emcee Grand Puba’s first album since 2009’s Retroactive, the 50-year-old rapper sounds, well, outdated. A master wordsmith who’s always seemed to be ahead of his time, Grand Puba shows his age from the start. Songs like “UDK” feature corny lines (“Who’s your doctor, Frankenstein?”) and antiquated beats that seem out of place, even for a ’90s rapper. Tracks like “Tap Out” and “Be Mine” offer a brief reprieve—and a more familiar boom bap feel—with a sound closer to tracks like “I Like It (I Wanna Be Where You Are)” off of 1995’s stellar project 2000, yet the 12-track album ultimately does little to add to Puba’s storied career. 2.2 out of 5