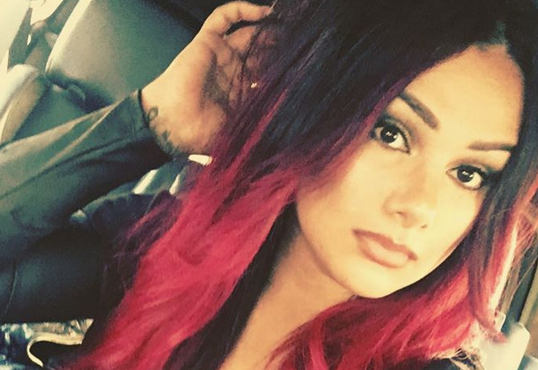 Los Angeles, CA – King Lil G, the lord of the Sucio movement, recently stopped in the DX Headquarters for a weekly Thursday DX Live interview when the conversation switched to Mexicans within the Hip Hop culture.

The Los Angeles native has amassed nearly one million followers across his social media channels and done so proudly repping his heritage. When asked why there aren’t many Mexican rap stars (especially given the close proximity with black street culture), he had a very detailed response that involved using Snow Tha Product as an example.

“I’m going to talk about some things I feel no one ever speaks about because its their own race, but when it comes to Mexicans, you know I’m Mexican so I can talk about this,” he began.

“We are very territorial and we hate on each other quicker than anything else just because we are very territorial. And I don’t know if it’s a thing of being an alpha male, but when there’s other rappers, like if you noticed in the times of Frost, what young artist did Frost bring out that you could say the ‘Dre thing’ with Eminem or 50 [Cent]? Like who can you remember than young bright artist that you could say he got his foot in the door, he brought him out? Did not happen. So I feel that should have been happening. Also shout out to Snow Tha Product. I love Snow Tha Product but I just feel she’s making a lot of moves right now and I feel like she should focus on bringing out the next girl. A younger girl. So if she’s watching I suggest she gets on that. To spread the love.”

He added, “Also with Snow, I’ve been trying to link up with her but we’ve both just been so busy; that’s we haven’t been able to make it happen but the overall answer is that we’re very territorial and even though sometimes we try to act like we’re united we be on some bullshit. We need to get out of that.”

During her visit to the DXHQ, Snow took exception to the unsolicited name drop and gave her point of view on the situation.

“He’s had my number for over two years, I don’t know what he’s talking about; out here talking recklessly publicly but my number’s in his DM and he can hit me up,” she said, in response to King Lil G’s aforementioned comments.

“I’m down to livestream the session. I don’t know why I had to hear about it through socials when dude has my number. I put him in my video; I feel like I’ve down what I needed to do for the Mexican community like to know I ‘fuck with all of y’all.’ Let’s work together! But at the same time, let’s go to everybody’s socials when I drop a song or when I go on tour or when I do this or when I do that, who’s really supporting me? I feel like I’ve had it on my shoulders for a long time no one really went out of their way…it really ain’t never been like that. So at this point, I already gave you my number so what do you really want from me? I ain’t driving to your house!”

Snow is currently prepping her new project, Halfway There…Part 1 due out later this year. As for King Lil G’s tidbit on female rappers, there was a general agreement on her end, but it also came with a well-thought explanation.

“It seems like every female rapper hates each other,” she said when asked the frequency of female rap collaborations in her eyes. “[But] I don’t. Honey Cocaine always hits me up. She’s dope. Chanel West Coast always hits me up. I’m cool with Rapsody. We’re cool in the background. It is hard to sometimes get on a song because for example: I’ve only got on songs with beasts like Crooked I or Tech N9ne…and still the fans will be like ‘he killed it’ or ‘she killed it.’

She went to elaborate on how males tend to be the instigators in female rapper animosity but she’s all for the U.N.I.T.Y.

When Snow and King Lil G finally occupy the same recording studio at the same time, HipHopDX won’t hesitate to let you know.