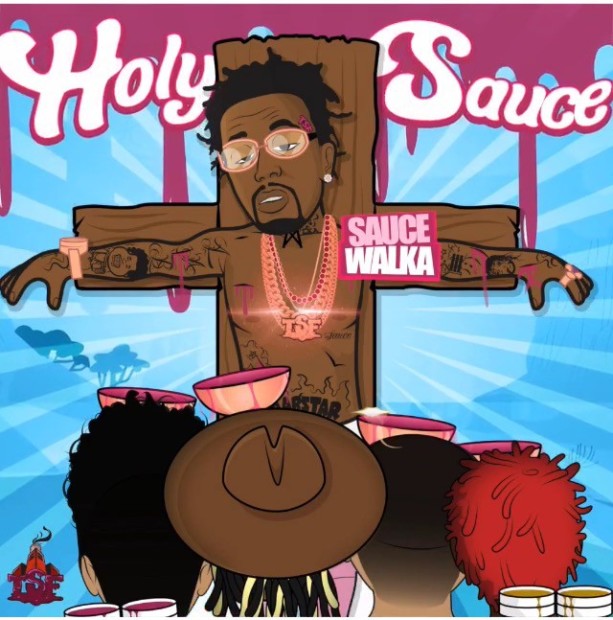 “I’m a real crack baby / bless the Lord cause he saved me / blessed the world with the flavor / drip now splash later,” heard on Holy Sauce track “Sauce Symphony” are just some of audacious bars that pretty much sums up Sauce Walka’s solo outing. Being subtle has never been an attribute for the Sauce Twinz member who keeps the Houston duo in the news. After all, this is the same guy who openly challenged pop music’s current demigod Drake for allegedly appropriating H-Town culture. Taking things further, the tape’s cover art features Walka hanging on a cross as purple blood drips into the chalice of characters alluding to Famous Dex, Future, Trill Sammy and Drizzy himself.

In his world, not only are individuals unjustly taking from from his city, but its swag as well. Holy Sauce becomes a grand statement that suffers from hollow moments despite moments offering a little soul-searching. Opening track “Seasoning” couldn’t serve as a better example of that exact mentality. The follow-up joint “Drip Some Flava Den” becomes another extra point in the Sauce end zone as he questions why individuals hating his style find time to emulate it. When he’s not hilariously hawling or blurting out random sound effects, he sing-songs his way through a simple organ and drum instrumental with a loose precision. Offering some of Holy Sauce’s comical lines including “I got the flavor like BBQ” and “I’m saucing and splashing away.” Anyone looking for something along the line of “2 Legited 2 Quited” can look forward to the catchiness of “Like Nothing” and “Oh Yeah.” Similar to Young Thug, Sauce Walka has an interesting ability to transform syllables and pull melodies from another dimension, thus adding more to the average production.

Despite having moments of notoriety within Hip Hop, “Still Ain’t Rich” shows up fairly early on and becomes one of many self analytical tracks. “I’m tired of living like this / sleeping with pistols like this / everywhere I go I got to pay attention cause these devils want to whip up my drip,” is an honest admission that making a splash in the blog world isn’t the end game. However, “Progression” has Walka still looking back to the gains he has indeed made throughout his career. Though artists like himself have been bitten by Atlanta’s more anthemic bug, Walka still finds time to represent his roots sonically. Holy Sauce’s best example is “Still Saucin” which ends on a chopped and screwed note.

Of course, there are typical street raps spanning his abilities in stealing women from men lacking in pimpin’ through “I Took Yo Bitch” to “Rich Holiday”s ode to straight flossin’. Walka’s personality and unique delivery shines though overly redundant themes hurt the project. Other moments promptly fall flat including “Money Trees,” which can’t hold a candle to Kendrick Lamar’s good kid m.A.A.d city classic with Jay Rock.

If Walka was hoping to be seen as a threat to those who he feels copied his style, this could be seen as a missed opportunity. Taken on its own merit, Holy Sauce has glaring problems. When you look past the unique delivery, comical ad-libs and poignant moments, a hollow project is all that remains. Sauce Walka is better than this.