M-1 & Bonnot - Between Me And The World Review 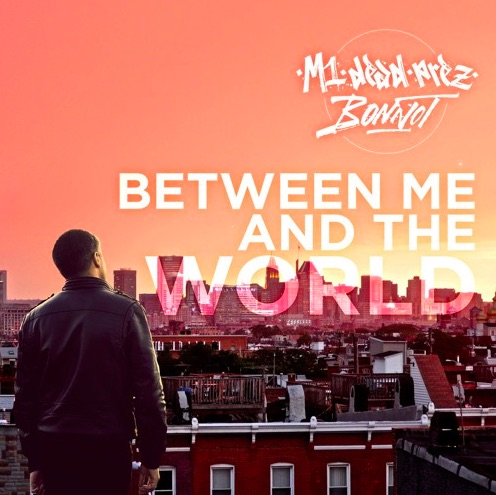 Inspired by famed black author and journalist Ta-Nehisi Coates, the dead prez’s most outspoken member M-1 grabs his Italian tag team partner and producer for their second album together Between Me and the World. Sitting down with DX in February, M-1 described his process for the album having recording it in Italy at a time where America was dealing with the outcome of Mike Brown, Eric Garner, and Freddie Gray, “Soon there’s going to be a solution that was the same as it always was. People aren’t going to accept the same old conclusions about how we’re treated here and what justice really means.”

Built on a platform of black power and edutainment that dates back to 1996, Between Me and the World follows the script he and his group member stic.man created two decades ago. That familiarity serves as both comfort for a loyal fan base and as a hindrance for those who look for their artists to grow their style within the current climate. M-1, while always potent and poignant in his message, doesn’t quite hit the mark with the entertainment appeal.

The album opens up with the Prodigy-assisted “Number One With a Bullet” over a soundbed comprised of lifted pieces of melody from Dr. Dre’s “Let’s Get High” flawlessly blended from borrowed percussion of Whodini’s “I’m a Hoe” (popularized by Eazy-E’s “Boyz-N-Da-Hood”). M-1 places Prodigy in his element as he shines when gun talk is the topic, “Yeah that shit sound good on a beat, but you ain’t good on the streets/you insulated I’m exposed to the heat, you need a buffer to talk to me/spooky nigga you got everything to lose I got nothing but killers.”

Sonically, Between Me and the World shows M-1 in his natural terrain over high energy, militant Hip Hop production with African and Caribbean influences. The best example, “Killing It,” displays M-1 with his rapid-fire flow blended seamlessly with Guyanese Reggae artist Jahdan Blakkamoore’s infectious chorus. High points for M-1 continue on the title track as he emotionally belts on the chorus, “Between me and this crazy world, I got my hands up don’t shoot between me and the world/and they aiming at you.”

Alas, the distance between “Killing It” and “Between Me and the World” is 9 tracks, comprised of miscues and sometimes cringe-worthy bars. On “Free Up,” M-1 belts, “Motivational manifesto, give me that gluten free pasta salad and that pesto.” M-1 follows up with more cover-ear-emoji bars on “Tobacco Inc.” as he opens the song with, “Cigarettes are addictive but why not be addicted to something that makes you live.”

Historically, the biggest knock on M-1 and dead prez is that their message and music is often shrouded in a preachy delivery. The message, while one that is certainly needed, often comes across tone deaf. In a Hip Hop climate today that consists of artistry and message being at the forefront of commercial appeal in the form of J. Cole, Kendrick Lamar, and Chance The Rapper alike, Between Me and the World firmly cements M-1 in the pulpit preaching to a congregation that tuned out shortly after Revolutionary but Gangsta.