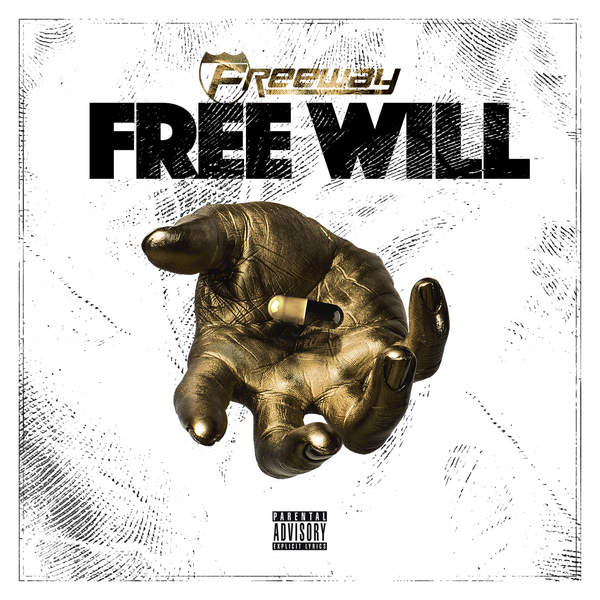 If Freeway was suffering from kidney failure you’d never know it from his output on wax. The diagnosis last fall has yet to slow the State Property Lieutenant General down. With his first solo studio release since 2012’s Diamond in the Ruff, Free aims to re-introduce himself with Free Will.

From the opening track, there’s a noticeable and refreshing change in Freeway’s vocal expression. One knock on Freeway from detractors was that his higher pitched, sing-song delivery wore thin after only a few tracks. Free Will displays a matured and refined flow that a 13-year veteran should have. Sonically, Free Will boasts some of the best and most complete production of Free’s career. S. Frank & Scholito, Pittsburgh mainstay Girl Talk, Tryfe, and L.E.S. & Chemist hold their own at providing a prodigious backdrop for a rap maestro accustomed to having Just Blaze, Jake One, Bink!, and Needlz behind the boards.

For an album devoid of any State Property features, the crew is still a heavily common theme throughout the project as Freeway emphatically belts, “It’s State Prop nigga, hold the Mac on em, my brother Sigel healed up this shit is back on,” over the S. Frank & Scholito-produced “Kodak.” On “Hot as Ice,” Philly Freezer gracefully bullies the powerful bass line and perfectly placed chines with lines like, “State Proper, Roc-A-Fella was our old sponsors, and we do it by ourself but it’s still proper on a higher level we don’t got the same problems/got a lawyer beat the case like his name Cochran; flow youthful, bass knockin’ from a North Philly block but I can wake Compton.”

The album starts to suffer from Third Act Syndrome with the Raheem DeVaughn assisted “Bennie & Stella” as he spits, “I’m the convenience sto’ because she got me open all night,” which might be better suited as an empty Drake pun. Tracks like “Kane & Abel” and “My BM”, albeit well produced, become lyrically redundant with plenty of the aforementioned topics.

While Freeway isn’t reinventing the wheel with Free Will, he shows that he can still hold his own after a decade in the game. But after surviving the collapse of Roc-A-Fella, almost losing his close friend and label mate to gun violence, and battling his own health scares; Free has yet to open up the pen game to allow the listener into his experience. Free Will is a solid project worth the spins but misses the opportunity to deliver a career-defining album by not having the personal touch that’s needed in his discography.