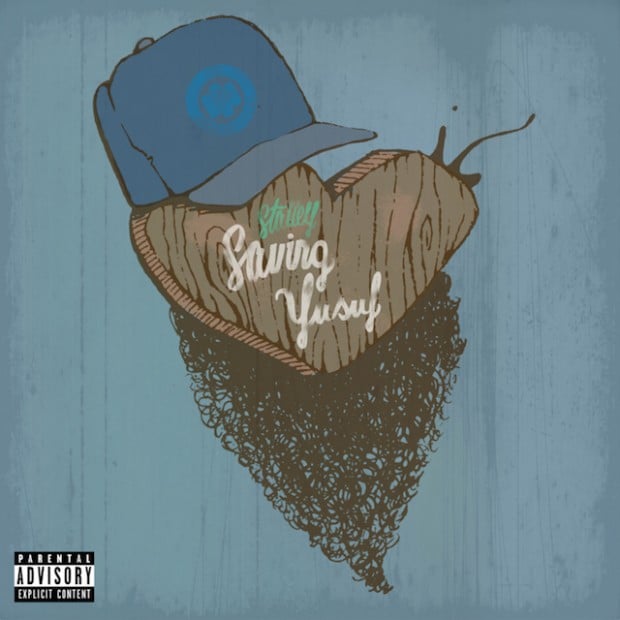 Most indie rappers end up ostracizing their fan bases after signing to major labels, but Stalley held up his end of the deal with his Maybach Music Group debut, Ohio – a concise, car-friendly record that showcased his personality and left an impression without any big budget compromises. But the long-bearded MC’s hard work seems to have gone unrewarded: his debut sold paltry numbers, and this fall’s The Laughing Introvert seemed to come and go as well. Stalley says that his latest, Saving Yusuf, is an attempt to reconnect with what made him fall in love with music after a rough couple years. “Before I got jaded, or the music started to…feel like work, I just wanted to get back to my creative space and enjoy what I do,” he said in a recent interview. “I started to pray, sit with my family and friends and close ones with me, observe the things going on, and zone in about the things I love about creating music and loving being an artist.” Stalley accomplishes the feat with Saving Yusuf, a solid addition to the Midwestern vet’s catalog.

Stalley doesn’t reinvent the wheel topically, but his earnestness and discipline make him a reliable listen. Saving Yusuf is set up as a recap of Stalley’s journey from hustling on the corner to securing a successful rap career, using brief interview clips before and after tracks. It’s a retread concept that’s broad enough to lack distinction, but sequencing and an ability to balance blue collar and machismo make the album go down easy. “Midwest Hustler” recounts the coke powder building up in his fingernails, “Real” prioritizes caring for family over whips and chains, and the Ray Cash-featured “Came a Long Way” celebrates his rags-to-riches ascension. While he’s mostly at home while rapping about hustling, Stalley’s sincerity is most palpable on several strong songs about women. “Safe Storm” shows appreciation for a significant other’s loyalty and grace through ups and downs, “Shooter” returns the favor with promises to defend her from harm, and the Big K.R.I.T.-assisted “Cut a Rug” is a fun night out. Interview clips are before and after some of the songs, helping hold things together without interrupting the flow.

Stalley brings the intelligence, but the new record isn’t as trunk-ready as his other work. On Ohio, Rashad handled eight of the album’s 12 songs, while Black Diamond handled two. Saving Yusuf is the opposite: Rashad only has two contributions, while Black Diamond produces a third of the tape’s fifteen cuts. Album opener “The Page” and “808z” (feat. Chuck Inglish) both fulfill bass-testing quotas, but there is a lower ratio of bangers than fans may like. The bright side is that Stalley still prospers over a more diverse array of sounds. Black Diamond’s five consecutive songs set an atmospheric tone that Stalley compliments with laid-back rhymes. Stalley also sounds natural over the bluesy guitar licks of “The Beast” and “Shooter.” The production isn’t the main attraction the way it sometimes is with Stalley’s music, but he thankfully steps up to the plate to keep the album afloat.

Despite its strengths, Saving Yusuf doesn’t have as strict quality control as Ohio. The smash-and-dash anthem “Like Me” comes across as unnecessary with the album’s otherwise heartfelt songs about women. The production of “Midwest Hustler” and “Came a Long Way” bore with uninventive flips of overused samples previously employed on songs by everyone from Big Boi, Lil Wayne and Estelle to Jeezy and Lupe. Stalley isn’t quite in the league of Kendrick Lamar and J. Cole as he boldly asserts on “Lay’m Down,” but his no frills style and the discipline to stay on course topically and musically make him a reliable listen.