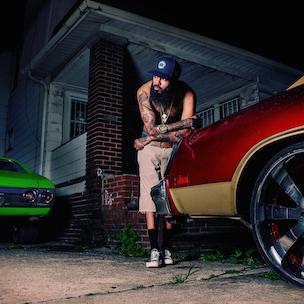 Midwestern representative Stalley set out to make an album that reverberates with the values red state country has come to represent. And he has succeeded in selling us on the merits of the cold industriousness of Ohio, but his “intelligent truck music” doesn’t quite hit home.  With a growing legion of fans and the backing to put together another potential standout project, expectations rose to a higher level for Stalley’s debut album Ohio than any of his previous projects.

Yet with a lyrical display that is earnestly straightforward but lacking in diversity, Stalley has produced an album that relies heavily on catchy hooks rather than the off-kilter homeliness of verses found on past tracks such as “Petrin Hill Peonies” that helped him achieve fame. Failing to truly connect with the albums’ overall conceptual arc, the sound production provided to him by long-time collaborator Rashad and fellow producer Black Diamond (Logic, Mac Miller) on Ohio doesn’t consistently contain the substance needed to make the transition from bumping on car speakers to close listening on a pair of headphones.

Right from the intro, it’s apparent something about Stalley’s style has changed; the beats are more modern, wavy and electronic than his past “Swangin” or underground-sounding tracks. But for fans of Stalley’s signature car culture style and slowed down records, this album provides a few throwbacks. In fact, the album’s first true song is a homage to Chevy’s and “Boyz-N-The-Hood.”

“I swear the boys in my hood are always hard. Come flossing around, they’ll take your car. See around these parts, Chevy jackin’ is law, and what’s mine is mine and what’s yours is ours,” rhymes Stalley, borrowing NWA rapper Eazy-E’s flow on the album’s first single: “Jackin’ Chevys.” Yet while the track sticks to the script Stalley has set before him – a car-loving emcee from a rough part of Ohio – it does little to push Stalley forward, overly relying on his flow to evoke memories of his 80s and 90s youth.

Stalley’s obsession with cars is made apparent throughout Ohio, with concept tracks such as “Chevelle” featuring Rashad blurring the lines between rides and women; and while this may excite Stalley’s diehard fans, it will do little to win over new listeners looking for Ohio to move from talking the state’s crumbling bridges and collapsing economy into the intimate – the values of the hard-working, blue collar people who define it’s landscape.

“A nigga got problems, sittin’ here, plottin’ how to count a million dollars. I need houses and garages, got baby mama drama, get my mama out them projects,” he raps on the hook of Ohio’s third track “Problems,” falling short of conveying the true emotions of the scene, oft-repeated, of feeling as though the sky were an ocean pressing down on you. It is a reality he stops short of giving us true emotional access to.

Even though the first half of the album skates by simply on its beats (“Boomin’” pairs a light, airy set of electronic chimes with an ominous set of horns in the background; “What It Be Like” featuring Nipsey Hussle is luminously jazzy for Stalley, much like the later track “Free”), Ohio’s second half is much closer to vintage Stalley.

It begins with Ohio’s second single, “Always Into Something” featuring Ty Dolla $ign, a track with a beat sure to have heads nodding between the bass, the dark-sounding horns and a guitar sample reminiscent of 50 Cent’s “21 Questions.” “Impala on eights, dope boys on crates, Swiss movement on watch, 45 on the waist. Got a million dollar hustle, a rich nigga face, white cocaine, rack it up on the plate,” rhymes Stalley, the topics the same but the lyrics spun with noticeably more gruff.

“System On Loud,” features another wavy, electronic beat, quickly asserting itself as another one of the album’s top tracks. “Fish-tailing down the eighty screaming F the world, with not a care to give. / I don’t want to be judged, I just want to live / This for the genius loners and all my stoner kids,” he raps on the tracks only verse, his voice going in and out as if out of a dream; the perfect track for a late night ride.

As the disjointed Ohio comes to a close, the final track “Navajo Rugs” pairing Stalley with Golden Age veterans De La Soul, an inquisitive, thoughtful Stalley proves that while he is a talent with a diverse skillset, he has yet to find the focus to bend and transform his emotions into a universal narrative.