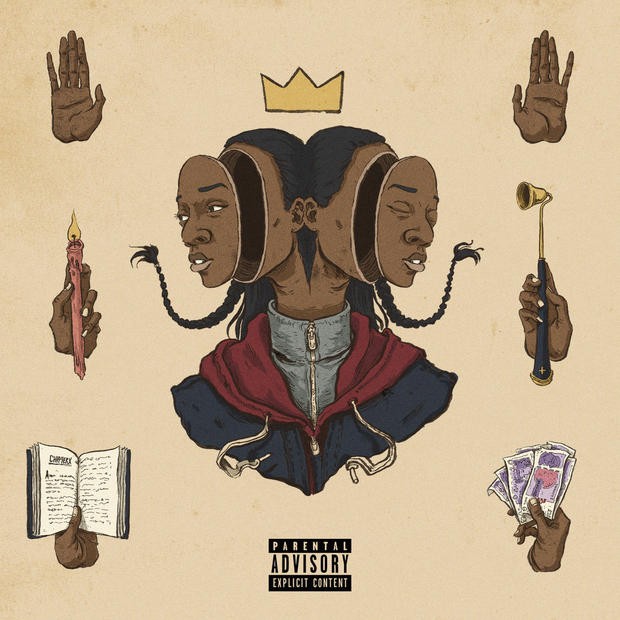 Meanwhile, as the world mystifies over the astonishing discovery of a ninth planet, Little Simz is busy enveloping listeners one by one into her orbit. When one types Little Simz into a Google search, one is met with a link to Simz’ “Dead Body,” the capstone moment of 2015’s A Curious Tale of Trials + Persons. Ignoring the inevitable debates involving Iggy Azalea and Nicki Minaj in the comments section, both the song and video act as a perfect embodiment of a young female who completely extracts sustenance from art. In little more than four years, Simz, born Simbi Ajikawo, has amassed thousands of starry-eyed followers that are more than willing to live vicariously through her artistic excursions. Never one to cower in the limelight, Simz’ breezy AGE 101: DROP X EP is quite possibly the most consummate representation of her musical DNA to date.

Rather than launch from solitary spaces, Simz spends most of DROP X allowing guests to swirl in her cosmos. Considering much of the London native’s most singular content features her wholly forthcoming in her detailed, myriad tales of struggle and strife, alternative voices have the effect of transforming her shapeshifting narratives. “Just A Dose” impregnates the airwaves with a hailstorm of eclectic styles, ranging from the confession-booth extraordinaire Isaiah Rashad to the cooled croons of Jesse Boykins III. On the surface, Simz teems with the feisty riot-grrrl disposition of M.I.A. in wholly charismatic rhyme displays, but beneath the haze is an almost impenetrable degree of personal divulgence. For Simz, music is clearly an intimate shedding process. The makeup and rainbow-colored costumes that often times seem like a bygone necessity for female rappers have no place in this forum.

Possibly the most downloadable moment occurs with the unlikely pairing of Simz and Mick Jenkins on “Sea Level.” Off-kilter computer sounds substitute 808s, and warbled, syrupy samples provide a wholesome backdrop. In the typical Simz stance, her thick British accent notwithstanding, it’s easy to confuse her energetic bars entirely with the stale, spoonfed braggadocio that clogs radio airwaves in drone-like loops. But at all times Simz performs a balancing act, begging the listener to dig beneath the surface. She evokes this same sensation on “Kiki’s Future.” Kent Jamz faithfully executes hook duty by providing a lush dreamscape of a chorus, and Simz’ incensed rhymes seem to bleed through her vocal chords rather than spill out.

An artist like Simz seems to banish the underlying concept of a freestyle, commonly rapping in such a stream-of-consciousness, spontaneous fashion that her bars register more like organic confessionals than combed-and-vetted-over couplets. In no uncertain terms, Simz rages against the phenomenon of female artists selling sex and fashion on “Savage (Freestyle).” At once it is the ballsy declaration of an MC who is wholly aware of her own talent, but also the unfettered confidence to speak about the various tribulations that somehow, symbiotically, make her art all the more staggering in the process.

One of the biggest sins of music criticism is to criticize external factors rather than the artistry itself. Nothing stinks more of a cop-out, but DROP X accomplishes its mission so succinctly that its own brevity is, ultimately, the project’s undoing. Curious bystanders become even more curious, left to ponder what her next move will be. In her 21 years of life, Simz has amassed an archive of worldly experiences that is impossible to properly negotiate in the context of an extended play alone. While it’s true that in virtually no time at all, a plentitude of female MCs have cropped up and subsequently infiltrated the masses, but Simz is in a universe all her own.