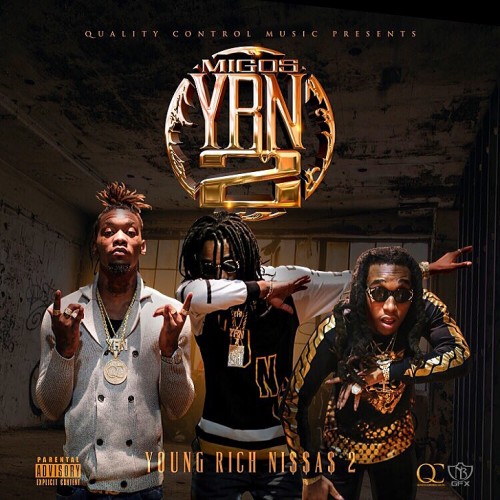 Since Hip Hop’s humble beginnings in the South Bronx, the culture has often been associated with the accompanying art form of dance. From B-Boys to Soulja Boy, artists and fans alike have danced along to songs, most of which stem from the genre’s more easy-going side. These days, everyone from athletes to actors is doing the dab, which has largely been credited to Atlanta trio Migos.

With one hit wonders vaulting artists into the spotlight, an even greater opportunity was afforded to those that mastered the entertainment role of their emcee duties. For every hit filled with introspective musings, there was a “Teach Me How To Dougie” or “Laffy Taffy” that gave listeners energy and got them out of their seats. In 2013, Quavo, Takeoff, and Offset followed that path to stardom with hits like “Versace” and “Hannah Montana” ultimately leading their fans to compare them to The Beatles just over a year ago. With Offset now freed from jail, the group has put forth its latest offering – ahead of the aptly named “Dab Tour” – a mixtape dubbed Young Rich Ni$$a$ 2, a title as unoriginal as the project’s contents.

Much like the dab, Migos’ latest project is sure to have you moving, comprised of the type of songs best played loudly on Friday evenings. There are no deep messages buried here, no tricky rhymes or complex beats, and for those reasons Young Rich Ni$$a$ 2 does little to help Migos expand its reach. Even still, longtime listeners and those willing to put aside their past notions of what Hip Hop should stand for and sound like just might enjoy it.

“I’ma put on for my city, you gon’ put on for these bitches / Young nigga I came from nothing, and now I’m at parties with Diddy,” raps Quavo on the first verse of “YRN 2 (Intro).” The line is far from original, the same gutter-to-glory story retold on hundreds of mixtapes and albums over the years; the ensuing dab reference and Kylie Kardashian shout-out do little to help Migos’ case. Instead of trying to set themselves apart, Migos rely on their self-assured, arrogant tone, along with the dark, bass-heavy production of Will A Fool, to put their fans into a trap music mindset.

From there, Young Rich Ni$$a$ 2 delivers an onslaught of trap-leaning, party-ready tracks without reprieve. The lyrics remain mostly unchanged – from the references to molly and Xanax in “WOA,” to the DM accolades mentioned on “Commando” – and money, cars, women, and clothes are clearly the overall focus of the project. Some may argue that this does little to move the genre forward, others will laud the group for their ability to hone in on what made them famous in the first place: giving fans a feeling of invincibility through their music.

On the StackBoy Twan-produced “Chances,” a track that begins with chimes and a series of rising and falling piano notes, the group sums it up best: “Now we fuck hoes and ball.” As far as rap clichés go, the aforementioned phrase is among the most used, and while Migos lacks lyrical originality, their music gives others hope that they too can achieve whatever goals they’ve set forth. For Migos, it’s not about creating timeless music, it’s about helping listeners escape the world around them, replacing worry and concern with feelings of confidence and machismo.

Young Rich Ni$$a$ 2 is often lackluster, even with the return of the trio’s third member, missing the celebratory feel found in other Migos tracks and instead leaning on auto-tune and repetition on songs like “Hoe On A Mission.” Simply put, while the influences of fellow Atlanta rappers Gucci Mane, Future, and Jeezy are readily apparent, as is their homage to their now-famous dance move, the group’s latest mixtape has a shortage of standout hits.

Some will hate Migos for looking down on those who are “Flying Coach,” but even with lyrical content that is hard to defend and deplorable tracks like “MuhF*ckn Tired,” Migos succeeds in instilling a spirited mentality in its listeners.