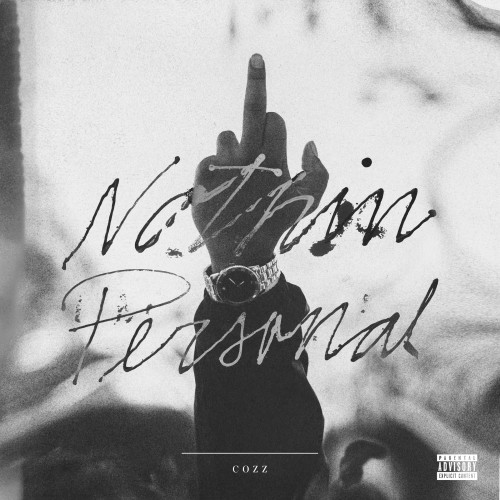 Traditionally, Hip Hop starts slowly. Rappers aren’t necessarily dropping projects right out of the gate because no one wants to drop something that will lose steam mid-year. This, however, is not the case for Dreamville’s Cozz.

Only four days into 2016, Cozz has already dropped a brand new mixtape entitled Nothin Personal. Coming off a strong 2014 and a relatively quiet 2015, if anyone has something to prove in 2016, it’s the Long Beach emcee. Especially because his last mixtape featured so much of his deft flow, gravely voice and enormous promise.

“Yeah, yeah, 2016 nigga. I’m tired of motherfuckers sleepin’ on a nigga,” Cozz claims. “I’m about to make my motherfuckin’ stamp.” It’s a line that manages to set the mixtape’s tone fairly well as the next 48 minutes doesn’t slow down.

The first three tracks are amazingly sound and highlight Cozz’s ability to make sonically technical songs. Since Cozz’s 2014 debut, it’s easy to tell he can rhyme, but on this mixtape, in particular, the level of ruthlessness is raised through the rough. The entire vibe is as intimidating as it is crafty. There’s a slight shift in gears on “Grey Goose” as it’s an atmospheric, drug infused crooning that sounds like it would come from the likes of Post Malone or Bryson Tiller rather than from Cozz’s razor-sharp pen, but it works, in a strange way. He is able to commit to that particular flow and pull off what could potentially be the mixtape’s best cut. Despite the rest of the mixtape being more “Who Shot Ya” and less “Big Poppa,” in the grand scheme of things, it doesn’t feel out of place.

In fact, Meez makes sure that nothing does. The rapper/producer chemistry oozes throughout with Meez pulling most of the duties behind the boards. Of course, Meez produced Cozz’s notable track “Dreams,” which is what landed him the Dreamville deal in the first place. So the duo makes for a durable, dexterous, musical combo. The only issue is how monotonous the mixtape becomes because each song sounds almost exactly like all the others.

It’s pretty clear that Cozz considers himself underrated amongst his rap peers, as he mentions that idea frequently. But that’s nonsensical, as the LBC emcee has only one strong mixtape under his belt, and just a few verses with his Dreamville brothers. Only a year removed from that solo debut, Cozz still has a lot of time to show and prove. Nothin Personal isn’t exactly perfection or an obvious contender for “2016 project of the year,” but it’s good enough to keep us from writing Cozz off, for now.

You can tell Meez is dialed into a specific sound he wants to execute badly. Ominous keys married to sharp drums create the perfect valley for Cozz to shine, but the variation is seemingly non-existent. As one moves through the mixtape, some of the songs start to blur together, which leaves room for no real standouts.

As the final track ,“Guinness,” comes to an end, Cozz sums up his position in rap pretty well by saying “Overlook him but you can never overcook ’em dog / I’m way too raw except for when I slay your broad, fool / I’m the tool that’s gon’ fix and glue the game if it breaks apart / Even if it takes too long I’m a get it in.” “Tabs” with fellow Dreamvillian Bas and “City of God” with Boogie serve as semi-standouts, but nothing that demands multiple listens.